Researchers at UCLA’s Jonsson Comprehensive Cancer Center have developed a way to image the spread of a dangerous form of prostate cancer earlier than today’s conventional imaging techniques. The new method may allow oncologists to find and treat metastases more quickly and give patients a better chance at survival.

The gene-based imaging system targets castration-resistant prostate cancer, an aggressive form of the disease that has become resistant to the hormone treatment known as androgen-deprivation therapy. Once this treatment no longer works, the cancer will progress within 12 to 18 months, and the prognosis becomes grim, said senior study author Dr. Lily Wu, a professor of molecular and medical pharmacology and a Jonsson Cancer Center researcher. 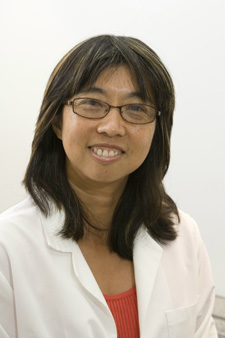 “Anytime you can detect cancer earlier, the chances of more effective control of the cancer increase and the outcomes for patients are better,” Wu said. “Unfortunately, there is little that can be done to treat castration-resistant prostate cancer once it has spread. In our study, we focused on finding ways to image these advanced metastatic prostate cancers accurately. “

The study was published Sept. 21 in the early online edition of Cancer Research, a peer-reviewed journal of the American Association for Cancer Research.

Wu’s team focused on using the “control switches” of genes that are only active in castration-resistant prostate cancer; they linked these molecular switches to a “reporter” gene that can be easily imaged. The specific switch the team used was the prostate-specific enhancing sequence (PSES), an androgen-independent promoter in castration-resistant prostate cancer that is more specific to that form of malignancy.

The PSES is derived from the prostate-specific antigen and the prostate-specific membrane antigen and is given a boost by the two-step transcriptional amplification system, which drives the expression of the imaging reporter genes. These reporter genes glow under bioluminescent or positron emission tomography (PET) scanning. The system works well in the androgen-depleted environment and is strongly specific to the prostate, two conditions that are most fitting for castration-resistant prostate cancer.

“The engineered system exhibits greatly elevated transcriptional activity, androgen independency and strong prostate cancer specificity, verified in cell culture and pre-clinical mouse models,” said Ziyue Karen Jiang, a senior doctoral student in pharmacology who is supported by a Jonsson Cancer Center fellowship. “These advantageous features of the system elicit superior gene-expression capability for castration-resistant prostate cancer, in comparison to the other systems which are driven by androgen-dependent promoters.”

Based on the favorable features shown in cell culture experiments, the research team expected the PSES-driven imaging system to be discriminating in detecting castration-resistant prostate cancer and cancer that had spread to distant organs. They were surprised to discover that the new system was able to accurately detect a bony metastasis that two traditional imaging methods were unable to detect.

The researchers tested the performance capacity of the PSES bioluminescent imaging system in mice that had prostate tumor cells implanted in the right knee to establish bony metastasis. After allowing six weeks for the tumor to grow, the PSES imaging reporter vector was injected into the mice to search for the metastasis. Four days after the injection, the signal from the reporter gene could be clearly seen, correctly identifying the prostate cancer metastasis in the right tibia bone in nine out of nine animals. PET scans were unable to distinguish between the tumor-bearing right knee and the uninvolved left knee.

The tumor growth rate in this bone metastasis model is not uniform, ranging from no spread to large tumor lesions in the bone marrow cavity. The PSES imaging system correctly identified two out of nine animals in which the tumor did not grow. These results give researchers confidence that the system is functioning correctly in seeking out prostate cancer bone metastasis in a specific and sensitive manner, Wu said.

“This study demonstrated the promising utility of a potent, androgen-independent and prostate cancer-specific expression system in directing gene-based molecular imaging in castration-resistant prostate cancer, even in the context of androgen-deprivation therapy,” the researchers said.

Prostate cancer is the most common cancer among men in the U.S., and its spread to other organs is the major cause of mortality. This year alone, more than 217,000 American men will be diagnosed with the malignancy. Of those, more than 32,000 will die from their disease.

The three-year study was funded by the National Institutes of Health, the Jonsson Cancer Center Foundation and UCLA’s Specialist Program of Research Excellence in Prostate Cancer.