Materials researchers at North Carolina State University have fine-tuned a technique that enables them to apply precisely controlled silica coatings to quantum dot nanorods in a day – up to 21 times faster than previous methods. In addition to saving time, the advance means the quantum dots are less likely to degrade, preserving their advantageous optical properties.

Quantum dots are nanoscale semiconductor materials whose small size cause them to have electron energy levels that differ from larger-scale versions of the same material. By controlling the size of the quantum dots, researchers can control the relevant energy levels – and those energy levels give quantum dots novel optical properties. These characteristics make quantum dots promising for applications such as opto-electronics and display technologies.

But quantum dots are surrounded by ligands, which are organic molecules that are sensitive to heat. If the ligands are damaged, the optical properties of the quantum dots suffer.

“We wanted to coat the rod-shaped quantum dots with silica to preserve their chemical and optical properties,” says Bryan Anderson, a former Ph.D. student at NC State who is lead author of a paper on the work. “However, coating quantum dot nanorods in a precise way poses challenges of its own.” 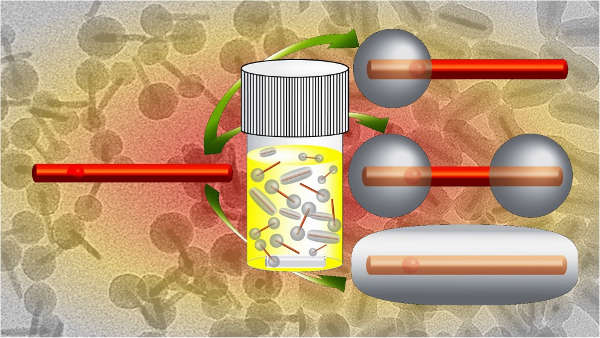 Previous work by other research teams has used water and ammonia in solution to facilitate coating quantum dot nanorods with silica. However, those techniques did not independently control the amounts of water and ammonia used in the process.

By independently controlling the amounts of water and ammonia used, the NC State researchers were able to match or exceed the precision of silica coatings achieved by previous methods. In addition, using their approach, the NC State team was able to complete the entire silica-coating process in a single day – rather than up to one to three weeks needed for other processes.

“The process time is important, because the longer the process takes, the more likely it is that the quantum dot nanorods being coated will degrade,” says Joe Tracy, an associate professor of materials science and engineering at NC State and senior author on the paper. “The time factor may also be important when we think about scaling this process up for manufacturing processes.”

That said, researchers still have a problem.

“We think ammonia may be the culprit,” Tracy says. “We have some ideas that we’re pursuing, focused on how to substitute another catalyst for ammonia in order to minimize the etching and better preserve the quantum dot nanorod’s optical properties.”

the journal Chemistry of Materials. The paper was co-authored by Wei-Chen Wu, a former Ph.D. student in Tracy’s lab. The work was done with support from the National Science Foundation under grant number DMR-1056653.