How play can make you more innovative and productive at work

At first glance, the MIT programmers may have looked like just a bunch of gamers goofing off, as they fired spaceship torpedoes in a video game they built.

But more than 50 years later, their 1960s game “Spacewar” has become a milestone in the development of computers, with its then-radical idea of using a controller to manipulate an icon in a graphical interface.

“Shooting your opponent in space may have looked like a waste of time or just a playful activity, but it led to a powerful piece of software that changed the history of computing,” says Steven Johnson, author of several books on innovation that have landed on the New York Times best-sellers list.

Johnson’s latest book, “Wonderland: How Play Made the Modern World,” continues his study of human creativity by exploring how having fun can lead to revolutionary ideas. Leading up to the book’s launch in November, Johnson is also hosting a 10-part podcast series in partnership with Microsoft.

The series, which began Monday, investigates the link between play and creativity and includes such guests as Whole Earth Catalog founder Stewart Brand and The New Yorker music critic Alex Ross. The first episode tells the story of computer pioneer Charles Babbage encountering a mechanical doll as a young child, a playful moment that sparked his brilliant career as an inventor.

“I started to reflect on how many important ideas in history initially came out of people playing around with things for the fun of it, or exploring new experiences for a sense of wonder and delight and amusement,” says Johnson. His books include “Everything Bad is Good for You,” “Where Good Ideas Come From” and “How We Got to Now,” which was also an Emmy-winning TV series that Johnson co-created and hosted. 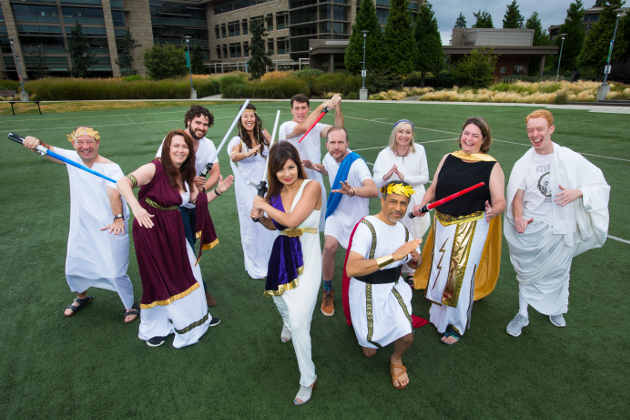 “Wonderland” covers a range of subjects, from the spice trade and shopping to public spaces and games, with fascinating, detailed examples. In a chapter on musical instruments, Johnson highlights a ninth-century flute toy from Baghdad that played different songs through interchangeable cylinders, showing how it was both entertaining curio and pioneering invention.

“It was the first time anybody dreamed of the idea of a programmable machine. It’s really the first moment in history where the difference between hardware and software suddenly became imaginable,” he says. The idea of programmability later enriched computational devices in the 19th century and became a bedrock computing principle in the 20th century.

“It’s an example of an incredibly important idea that began in play, in song and music and amusement,” Johnson says. “Play is a very profound predictor of future developments.”

But for today’s organizations, integrating time for play can be a tradeoff between deadlines and deliverables. A recent survey by Johnson and Microsoft found that 70 percent of U.S. employees feel more energized and productive when they have time to “play” at work, yet only 31 percent say their organizations encourage this time during the work day.

Johnson says businesses can incorporate play by creating lively work environments, encouraging fun and recognizing the importance of hobbies outside of work. Some companies also set aside time for employees to share non-job interests, which might include music, art or volunteer work.

“It’s emotionally interesting and builds team camaraderie,” says Johnson. “It’s also often that an outside idea sparks a new thought. If you’re focused on a problem exclusively within the terms of that problem, it’s very hard to break out of that mindset.”

A workspace’s physical features also affect creativity, and many companies – startups and tech organizations in particular – have incorporated games and cool hangouts that foster a playful atmosphere.

“There’s a reason to have a pool table and a fun, coffee-shop-like environment, instead of a bunch of conference rooms and cubicles. They’re not just perks; they make people more creative and innovative,” Johnson says. They also spark what he calls “serendipitous connections.”

For Microsoft, the concept of play is embedded in the company’s culture, from the annual //oneweek Hackathon event — a celebration of employee innovation — to an ethos that encourages employees to “bring their ‘whole selves’ to work,” says Dona Sarkar, who leads the community for Microsoft’s Windows Insider Program.

A few weeks ago, funny discussions about togas and lightsabers helped her bond with her partner marketing team, whom she discovered has always embraced individual interests from silly to serious. Using the interests for goodwill and good ideas, the team’s friendly dynamic enables risk-taking and creativity, while personal passions have led to important projects.

“When we bring our whole selves to work, we’re able to solve problems for bigger groups of customers,” says Sarkar. “When you introduce humor and levity, it breaks up boundaries between people. It helps co-workers become friends. You can bring up all these creative ideas, and we can riff on them and make them even better.”

As a veteran engineer and manager, Sarkar has always encouraged her teams to leave the office and work together in a coffee shop, park or mall. She often bonds with co-workers while traveling for work and says a few hours with colleagues away from the normal grind can help people open up — and ultimately be more creative.

“When you remove yourself from the office, you stop being ‘Office Person’ and you start being the human being that you are,” Sarkar says.

The advice echoes Johnson’s and Microsoft’s research, which found that more than half of employees reported that their new ideas are triggered while hanging out with friends, doing something playful or even taking a shower — anywhere, it seemed, but at work.

“Sometimes, the best ideas come from stepping away from the problem you’re working on and entering that more playful state,” Johnson says. “And letting your mind explore a more experimental mode.”