AUSTIN, Texas — Researchers in the Cockrell School of Engineering at The University of Texas at Austin have discovered a correlation between aging and the effectiveness of T-cells, a type of immune cell programmed to fight or kill a threat. The researchers found that older people have T-cells that are less effective at fending off the hepatitis C virus (HCV).

The research, published June 1 in Science Translational Medicine, is based on a novel technique, called iTAST (in situ TCR affinity and sequence test), that is able to measure a T-cell’s so-called affinity, a physical parameter that determines how well T-cell receptors recognize and bind to their antigens, such as those derived from bacteria, viruses or cancer cells. If a person has low-affinity T-cells for a specific virus, the body won’t mount an effective fight against the virus. High-affinity T-cells, on the other hand, can launch strong fights against diseases and illnesses such as cancer and diabetes.

The technique could be a way to expedite scientific discoveries and biomedical research. ITAST’s ability to identify and retrieve a person’s high-affinity T-cells could benefit immunotherapy and vaccine development, resulting in improved personalized medicine and therapies.

Led by biomedical engineering Assistant Professor Jenny Jiang, a team of researchers invented and tested iTAST at UT Austin. The team’s experiments focused on measuring a group of donors’ T-cell affinity for HCV. They were surprised to find a stark difference between the HCV-specific T-cells of older and younger donors.

“T-cell affinity is a parameter that can gauge how healthy your immune system is toward a specific antigen,” said Jiang, the senior author on the paper. “We found that as you grow older, your T-cells capable of recognizing some of the viruses that you haven’t encountered before become progressively lower in affinity.” 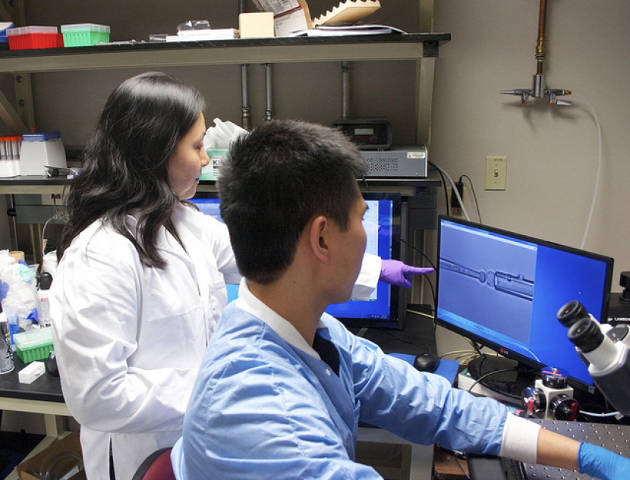 The patent-pending iTAST is the first technique capable of retrieving and measuring the affinity of a large volume of T-cells and their correlated receptor sequences from an individual.

ITAST is a three-part process that can isolate T-cells, measure T-cell affinity and sequence T-cell receptor genes, all in one day. Presently, the techniques used to measure the T-cell affinity of just one cell are extremely labor intensive and time consuming, sometimes taking up to a year.

In the health care arena, the technique could be useful in evaluating the health status of an individual or in adoptive immunotherapy — a nascent field of medicine in which physicians tailor therapies and dosages for individual patients to rev up the body’s defenses. In some immunotherapy methods, synthetic T-cell receptor genes that can recognize cancer cells are added to T-cells and then transferred back into the body. Although immunotherapy is a promising field, there have been examples where these genetically engineered T-cells cause dangerous unintended reactions in the body and even deaths.

“What we are doing is isolating T-cells from a patient,” said Shuqi Zhang, a UT Austin chemical engineering graduate student and lead author on the paper. “They are the patient’s own cells, so iTAST is potentially a way to isolate safe high-affinity T-cells for adoptive immunotherapy.”

In the researcher’s first deployment of iTAST, they were able to demonstrate that there is a link between aging and T-cell affinity. It’s common knowledge that as people age, they are more susceptible to illness and less responsive to vaccines. But, for now, scientists and engineers say our understanding of immune aging is incomplete.

“This is an important discovery,” Zhang said. “This is not the only reason that the immune system slows down, but we can now look more closely at how T-cells may be contributing.”

Having successfully tested iTAST, Jiang and her lab are continuing to investigate T-cell affinity and the role it plays in aging and cancer, and in infections and autoimmune diseases. The research received funding from the National Institutes of Health, the Welch Foundation, the Cancer Prevention and Research Institute of Texas, and the Damon Runyon Cancer Research Foundation.

“Now that we can measure T-cell affinity, as well as sequence, we can really see how useful it is as a parameter,” Zhang said. “T-cells can behave in various ways, but this lineage has yet to be characterized. We believe this technique could help answer some basic scientific questions.”