Combined research efforts by scientists involved in the Gulf of Maine Toxicity (GOMTOX) project, funded by NOAA’s Ecology and Oceanography of Harmful Algal Blooms (ECOHAB) program, and administered by the National Centers for Coastal Ocean Science (NCCOS), have led to enhanced understanding of toxic algal blooms on Georges Bank.   This new information, coupled with an at-sea and dockside testing protocol developed through collaboration between GOMTOX and U.S. Food and Drug Administration (FDA) investigators, has allowed fishermen to harvest ocean quahogs and surf clams in these offshore waters for the first time in more than two decades.

The shellfish industry estimates the Georges Bank fishery can produce up to 1 million bushels of surf clams and ocean quahogs a year, valued $10 – 15 million annually. “There is a billion dollars’ worth of shellfish product on Georges Bank that is property of the United States but that can’t be harvested because of the threat of toxicity, and 99.9% of the time, it is good wholesome product,” says Dave Wallace of North Atlantic Clam Association and a GOMTOX participant.  “In an unusual and unique partnership, we worked with GOMTOX scientists, the FDA, and the states of Massachusetts, Rhode Island, New Jersey and Delaware and now that huge resource can go into commerce, which helps the entire country.”

“We are extremely pleased that research funded by NOAA can provide such an economic boost to New England shellfisheries,” says Robert Magnien, Director of NCCOS’ Center for Sponsored Coastal Ocean Research.  “It is a clear example of how research authorized by the Harmful Algal Bloom and Hypoxia Research and Control Act can protect both public health and local economies through collaborations between academic scientists, state and federal regulatory agencies, and the shellfish industry.” 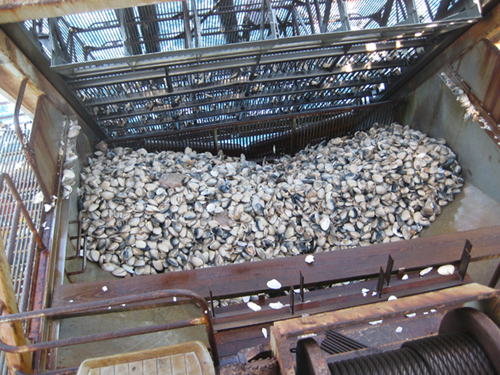 A dredge aboard the Sea Watcher I brings in an abundance of clams. A decision by federal regulators to re-open large portions of Georges Bank, after a 22-year closure, went into effect Jan. 1, 2013. The shellfish industry estimates the Georges Bank fishery can produce up to 1 million bushels of surf clams and ocean quahogs a year, valued $10 – 15 million annually. (Photo courtesy of Stacey DeGrasse, FDA)

An elevated area of the sea floor between Cape Cod and Nova Scotia, Georges Bank is one of the best fishing grounds on Earth. But since 1990, it has been closed to harvesting of surf clams and ocean quahogs after harmful algal blooms (also referred to as “red tides”) caused paralytic shellfish poisoning (PSP) that sickened fishermen.  For decades scientists speculated the blooms on Georges Bank were fueled by coastal blooms in the Gulf of Maine.

More recent research by GOMTOX investigators, however, has shown that Georges Bank is home to a separate and distinct population of the toxic algae, which is described in a recently published paper by Woods Hole Oceanographic Institution (WHOI) scientist Dennis McGillicuddy and other members of the GOMTOX team.

It has been known for many years that the phytoplankton Alexandrium fundyense is the cause of the harmful algal blooms that occur to varying severity each spring and summer along the coastal Gulf of Maine, sometimes extending as far south as Cape Cod and the adjacent islands. The algae’s seed populations or “cysts” germinate from seabeds starting in early spring and bloom at the sea surface, until all of the necessary nutrients in the water are consumed. As the nutrients run out, the cells form cysts and fall to the seafloor, as seed for the following spring.  High concentrations of the toxic algae can cause closure of shellfish beds and cost the region many millions of dollars. 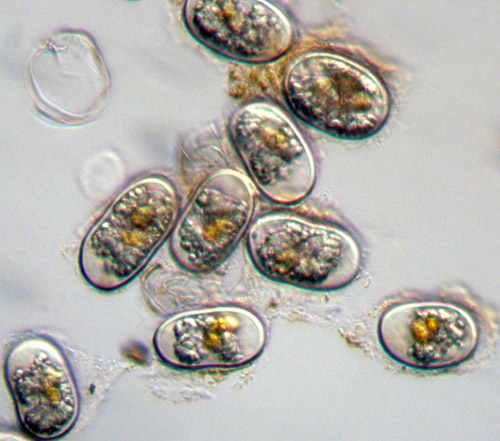 Scientists have known for many years that the phytoplankton Alexandrium fundyense is the cause of the harmful algae blooms that occur to varying severity each spring and summer along the coastal Gulf of Maine, sometimes extending as far south as Cape Cod and the adjacent islands, and in Georges Bank. In 1990, an Alexandrium bloom caused the closure of Georges Bank to harvest of surf clams and ocean quahogs, after fishermen were sickened from eating shellfish. (Photo courtesy Don Anderson, Woods Hole Oceanographic Institution)

Precisely why the blooms vary in severity has been much more difficult to determine, and has involved extensive seasonal sampling of water and sediments, study of coastal currents, environmental and oceanographic conditions, availability of nutrients, and the development of a computer program to model all of the variables.

Researchers got the first signal that something very different was happening on Georges Bank during a research cruise to count Alexandrium cells in sea water samples in spring/summer 2007. “We devised our sampling strategy to look at the cells’ transport pathways from coastal waters onto the Bank,” says McGillicuddy. Throughout the coastal Gulf of Maine, the numbers were very low. But when the research team started sampling at Georges Bank, they found very high concentrations of Alexandrium in the water, despite the fact that the bloom had not really begun along the coast of Maine.

“I’ll never forget the moment we hit a big patch of cells on Georges Bank,” says Dave Townsend, a GOMTOX scientist from the University of Maine and co-author of the paper. “We extended our sampling to go all the way across Georges Bank and we were still hitting them.  We had to turn around and completely reorganize our sampling strategy based on what we were seeing in the microscope.” 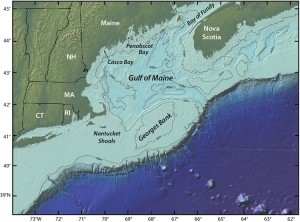 An elevated area of the sea floor between Cape Cod and Nova Scotia, Georges Bank is one of the best fishing grounds on Earth. For decades scientists speculated the blooms on Georges Bank were fueled by coastal blooms in the Gulf of Maine, but new research suggests the population of toxin-producing algae on Georges Bank occupies a distinct niche. Illustration by Jack Cook, Woods Hole Oceanographic Institution (Click image to enlarge)

In the three-year course of intensive study on Georges Bank since then, blooms have occurred every year, in concentrations that would typically lead to toxicities in coastal shellfish beds. Yet, a parallel effort by the fishing industry and federal testing labs to analyze shellfish samples from Georges Bank found the bivalves to be clean of toxins.  So while toxins were produced at and near the surface, they were not delivered to the surf clams and ocean quahogs in the seabed in quantities sufficient to threaten human health.

The system on Georges Bank was indeed a riddle:  Few cysts, yet large blooms; a large bloom, yet little to no toxicity in the shellfish. Applying the same detailed analyses to the offshore population of Alexandrium that they applied to coastal populations, the scientists discovered the optimum growing conditions for Alexandrium on Georges Bank were colder and saltier than those of their coastal relatives. Their analysis uncovered how the currents in the region can isolate Georges Bank to create colder and saltier conditions. If the conditions are favorable, the researchers say, Alexandrium populations can double every three days, and in a month’s time, grow from concentrations of 10 cells per liter to 10,000. 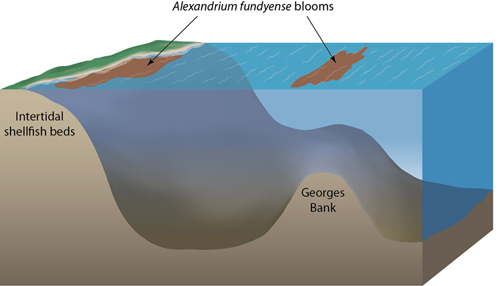 Recent research has led the scientists to think Georges Bank is home to a separate and distinct population of the toxic algae, which still holds some mysteries for the researchers. Coastal shellfish populations are directly exposed to the toxins when the blooms make landfall, but scientists remain uncertain about the conduit for toxicity from the surface ocean to the deep shellfish beds on Georges Bank, located at about 50m depth. (Illustration by Jack Cook, Woods Hole Oceanographic Institution)

Further setting the Georges Bank population apart was the finding by GOMTOX colleagues at University of Massachusetts, Dartmouth’s School for Marine Science and Technology (SMAST), working in collaboration with the FDA, who determined that the toxin content of algae on Georges Bank was different than the coastal Gulf of Maine populations.  “The toxins present in Alexandrium cells from Georges Bank were, on average, two times lower than those in the coastal Gulf of Maine,” said Chrissy Petitpas, a doctoral student working in Professor Jefferson Turner’s lab at SMAST.

Despite this new information and the knowledge that the clams have been shown to be safe for humans to eat at the present time, the fact remains that concentrations of the toxins in the clams on Georges Bank in 1989 and 1990 did reach dangerous levels. Scientists know that coastal shellfish populations are directly exposed to the toxins when the blooms make landfall, but they remain uncertain about the conduit for toxicity from the surface ocean to the deep shellfish beds on Georges Bank, located at about 50m depth.

But, thanks to an innovative screening protocol and regulatory structure developed collaboratively by the FDA, NOAA’s National Marine Fisheries Service, the fishing industry, and testing labs approved by the National Shellfish Sanitation Program, a system is now in place to monitor, test, and verify that clams harvested from Georges Bank are safe. The clams are checked by fishermen at sea using the newly available test kit, and re-checked by regulators when the fishing vessels reach the dock.  Combined with the weekly monitoring of shellfish beds along the coast during the bloom season to protect human health, these monitoring systems are extremely effective at keeping toxic shellfish off the market. 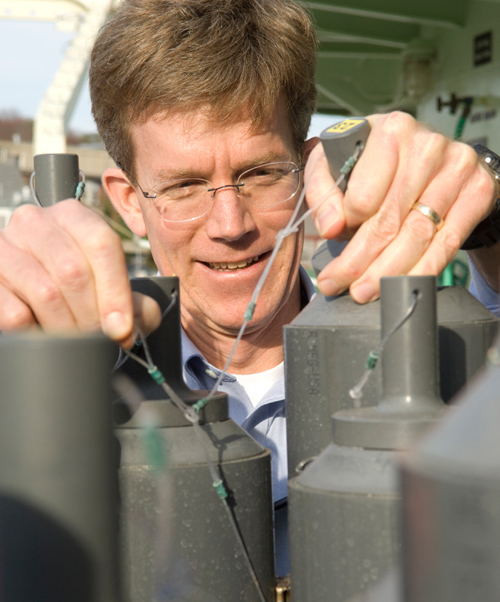 Dennis McGillicuddy is a senior scientist at WHOI and one of the GOMTOX research collaborators working to understand the population dynamics of the toxic algae. (Photo by Tom Kleindinst, Woods Hole Oceanographic Institution)

“Toxin levels in shellfish on Georges Bank have been very low over the last few years. We are confident that this new testing protocol will serve to protect public health should toxin levels rise again in the future,” said Stacey DeGrasse, seafood research coordinator in the FDA’s Office of Regulatory Science and a major participant in the development of the new offshore testing protocol. “We intend to continue to work closely with NOAA to ensure that the shellfish from this region are harvested safely.”

“I’ve run over 2,500 samples from Georges Bank since mid-March, and all of them have been clean of toxin,” says Darcie Couture, a former manager of the marine biotoxins program at the Maine Department of Marine Resources, who now operates the federally permitted testing lab.  “We’ve been fortunate in finding a way that we can safely harvest that product out there.”

“Although we can’t predict when conditions on Georges Bank will favor a large bloom, our knowledge of the bloom dynamics was used in establishing a suitable management approach,” says Don Anderson, a senior scientist at WHOI and the lead investigator on the GOMTOX project.

For the scientists, the work to understand the dynamics of the Georges Bank population continues.  New DNA evidence uncovered by Woods Hole Center for Oceans and Human Health researchers Deana Erdner (University of Texas) and Mindy Richlen from Don Anderson’s laboratory at WHOI, suggests the Georges Bank Alexandrium population is genetically distinct.

“We thought the Georges Bank population was just the little toe at the end of the coastal population, but it’s not. It is separate, and it occupies a distinct niche from the rest of the Alexandrium in this region,” says McGillicuddy.  “This was a big surprise to us.”

The research was funded, in part, by NOAA’s NCCOS, with additional support provided by NSF and NIEHS through the Woods Hole Center for Oceans and Human Health.