A new procedure that thickens and thins fluid at the micron level could save consumers and manufacturers money, particularly for soap products that depend on certain molecules to effectively deal with grease and dirt. Researchers at the University of Washington published their findings online April 9 in the Proceedings of the National Academy of Sciences.

Read the back of most shampoos and dishwashing detergents and you’ll find the word “surfactant” in the list of active ingredients. Surfactant molecules are tiny, yet they are the reason dish soap can attack an oily spot and shampoo can rid the scalp of grease.

Surfactant molecules are made up of two main parts, a head and a tail. Heads are attracted to water, while the tails are oil-soluble. This unique structure helps them break down and penetrate grease and oil while immersed in water. It also makes the soaps, shampoos and detergents thicker, or more viscous.

Soap manufacturers add organic and synthetic surfactants – and often a slew of other ingredients – to their products to achieve a desired thickness and to help remove grease and dirt. These extra ingredients add volume to the soap products, which then cost more to manufacture, package and ship, ultimately shifting more costs to consumers, said Amy Shen, a UW associate professor of mechanical engineering and lead author of the paper. 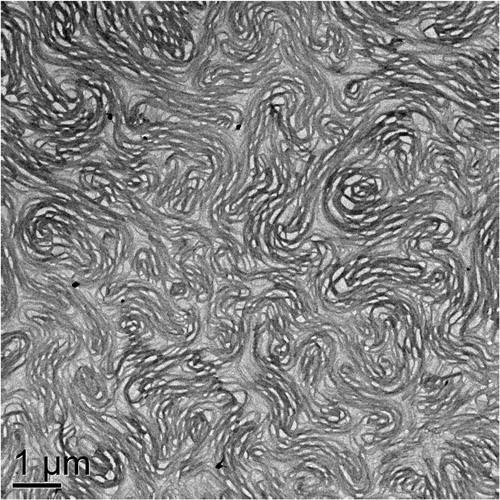 A web-like, gel structure is formed after fluid passes through the flow device. The unit of measurement is 1 micron. Image credit: Environmental Molecular Sciences Laboratory and UW

The research team’s design could create the same thickening results without having to add extra ingredients.

“Our flow procedure can potentially help companies and consumers save a lot of money,” Shen said. “This way, companies don’t have to add too many surfactants to their products.”

Researchers found that when they manipulated the flow of a liquid through microscopic channels, the resulting substance became thicker. Now, scientists add a lot of salt, or alter the temperature and level of acidity to induce this change, but these methods can be expensive and more toxic, Shen said.

The team built a palm-sized tool called a microfluidics device that lets researchers pump water mixed with a little detergent and salt through a series of vertical posts. The distance between posts is about one-tenth the size of a single human hair.That micron-sized gap squeezes the liquid as it flows, causing it to quickly deform. The end result is a gel-like substance that’s more viscous and elastic.

When researchers looked at high-resolution images of the end product, they saw a series of wormlike rods attaching and intermingling with each other, creating an entangled web. This structure stayed intact after the procedure was complete, which suggests this process can create a permanent, scaffold-like network that could prove useful for biological applications, Shen said. She is collaborating with other UW researchers to try to create stable structures that could house enzymes and other biomarkers for detecting certain diseases.

Shen and her team also discovered that when they pumped a thicker, more elastic fluid through the device, the opposite effect happened – the gel became thinner and more porous. This could be useful in biomedical applications, Shen said, though it hasn’t yet been tested. In theory, a semi-solid gel could be injected into veins, then transform into a thinner liquid, delivering drugs throughout the body.

A diagram showing how the microfluidics device works. Water mixed with salt and soap is injected into a spout (left back). The fluid travels through a series of posts (see enlarged segment) that cause the fluid to thicken. Image credit: University of Washington

Researchers hope one eventual outcome will be a scaled-up industrial design of their microfluidics device that could help manufacturers churn out soap products that aren’t filled with an excess of added materials. Shen has presented her initial findings at Procter & Gamble Co.

“What we can provide are all of the important parameters for operating conditions so companies can have an industrial design to achieve their goals,” Shen said.