As recreational fishing activity has reduced predators in many of Cape Cod’s salt marsh ecosystems, Sesarma crabs have feasted on grasses, causing dramatic die-offs of the marshes, according to a new study. The researchers assessed the “trophic cascade” in several experiments that also ruled out alternative explanations for the problem.

PROVIDENCE, R.I. [Brown University] — Recreational fishing is a major contributor to the rapid decline of important salt marshes along Cape Cod because it strips top predators such as striped bass, blue crabs, and smooth dogfish out of the ecosystem, according to new research by Brown University ecologists.

With far fewer predators in areas where recreational fishing is prevalent, native Sesarma crabs have had relatively free rein to eat salt marsh grasses, causing the ecosystem to collapse, said Mark Bertness, chair of Brown’s Department of Ecology and Evolutionary Biology and the paper’s senior author. He led a series of experiments and measurements published online in the journal Ecology that he said unavoidably implicate recreational fishing in marsh die-off.

“We had to be so careful about dotting all the ‘i’s and crossing all the ‘t’s and making sure that we had ruled out all alternative hypotheses, because even within the scientific community, there are plenty of fishermen who don’t want this to be true,” Bertness said. “Certainly out in the general public there are plenty of people who are into recreational fishing who don’t want it to be the problem.”

Bertness said salt marshes are vitally important because they protect coastlines from erosion, filter pollutants headed from land to sea, and act as nurseries for the young of many species of crabs and fish. Studies that assign economic value to varying ecosystems rank salt marshes at or near the top, he said. 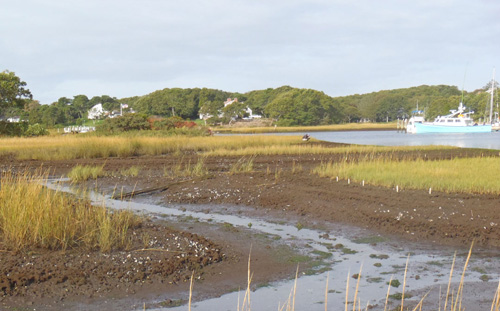 To do their research, Bertness’s team worked at seven healthy and seven distressed salt marshes on Cape Cod in 2009 and 2010. They tested not only for direct evidence supporting their hypothesis about recreational fishing but also to check whether other factors could be responsible for the decline of the marshes.

They measured recreational fishing pressure at each of the 14 sites in two ways. They directly observed and counted fishermen in the area. They also observed the increase in recreational fishing infrastructure, such as docks, at the sites over several decades by studying historical aerial photographs. They consulted those photographs to measure how marshes have died off over time.

In 2009, the team tallied top Sesarma-eating predator populations at the sites by catching samplings in traps and then releasing them. They also counted Sesarma densities at the 14 sites, measured the intensity with which Sesarma crabs were eating grasses, and evaluated the extent of marsh die-off at these sites. 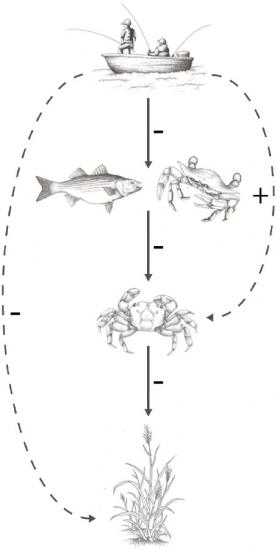 The story told by these measurements was clear. As recreation fishing infrastructure has developed over time, nearby marshes have increasingly died off and collapsed. The marshes in the areas with prevalent recreational fishing were always the ones that were dying off. The dying marshes had significantly fewer Sesarma-eating predators, many more Sesarma, and the intensity with which Sesarma were eating the marshes was much higher.

The team even did experiments where they tied up Sesarma crabs and left them as sitting ducks for predators to eat. In the waters of dying marshes, the crabs were three times less likely to be eaten than in marshes that were healthy.

The team knew that their research program had to rule out alternative explanations to a “trophic cascade” caused by recreational fishing.

What if, for instance, the fishing activity wasn’t reducing top predator numbers, but instead the waters with predator decline were simply less hospitable to marine life (except Sesarma crabs). To test that, in the 14 marshes, the team counted marine species that are not targeted by recreational fishermen. They found that the populations didn’t differ between dying and healthy marshes. Only the fish that fishermen prefer were reduced in number in dying marsh areas.

“Differences in predator biomass reflect the absence of recreationally targeted fish and crab species at die-off sites, the signature of selective recreational fishing pressure rather than general habitat degradation,” the authors wrote in Ecology.

Could the environment be less hospitable to the grass in areas of marsh die-off? To test that, the scientists planted grass in each marsh and kept some of it protected by cages, some of it totally exposed and some in cages with openings that Sesarma crabs could enter and exit freely. If the environment were inhospitable to the grass it wouldn’t thrive, even when protected in the full cages. But the fully protected grasses did grow in both areas. Meanwhile, the unprotected grasses were eaten much more readily in the areas with fewer predators and more Sesarma. The die-off of grasses was due to higher Sesarma populations, not some broader factor.

Other tests and prior research ruled out other explanations. Was the ground harder and therefore more resistant to Sesarma burrows in areas with healthier marsh grass? No. Was there a difference in water flow between healthy marshes and unhealthy ones? No.

Could the marsh die-off be the result of climate change? That isn’t possible, Bertness said, given that die-off only occurs in areas near recreational fishing infrastructure and where fishing activity can be readily observed.

“All the obvious and not so obvious alternate hypotheses we addressed and rejected,” Bertness said.

Bertness plans further tests. In one they plan to deploy green crabs, natural predators of Sesarma, in the marshes. They’ll test what the effect of reintroducing Sesarma predators will have on the marsh. In some cases the green crabs will be able to patrol freely, while in other cases they’ll be maintained in cages where they will essentially act as Sesarma scarecrows.

Bertness is also studying how marshes might recover if the pressure on them abates. In addition to green crab sentries, Bertness said, another way to accomplish that could be for recreational fishing along the coast to begin following “catch and release” principles like those that often govern fishing in rivers and lakes.

“I think something like that could work,” Bertness said. “It’s a pretty simple solution.”

In addition to Bertness, the paper’s authors are Andrew Altieri, Tyler Coverdale, Nicholas Hermann, and Christine Angelini — all current or former Brown students.