Children who are skilled in understanding how shapes fit together to make recognizable objects also have an advantage when it comes to learning the number line and solving math problems, research at the University of Chicago shows.

The work is further evidence of the value of providing young children with early opportunities in spatial learning, which contributes to their ability to mentally manipulate objects and understand spatial relationships, which are important in a wide range of tasks, including reading maps and graphs and understanding diagrams showing how to put things together. Those skills also have been shown to be important in the Science, Technology, Engineering and Mathematics (STEM) fields.

Scholars at UChicago have shown, for instance, that working with puzzles and learning to identify shapes are connected to improved spatial understanding and better achievement, particularly in geometry. A new paper, however, is the first to connect robust spatial learning with better comprehension of other aspects of mathematics, such as arithmetic.

“We found that children’s spatial skills at the beginning of first and second grades predicted improvements in linear number line knowledge over the course of the school year,” said Elizabeth Gunderson, a UChicago postdoctoral scholar who is lead author of the paper, “The Relation Between Spatial Skill and Early Number Knowledge: The Role of the Linear Number Line,” published in the current issue of the journal Development Psychology. 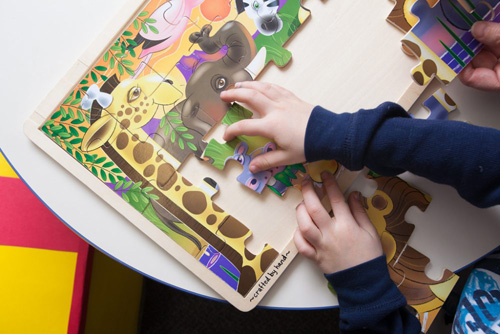 UChicago scholars have shown that puzzle play is connected to improved spatial understanding, such as geometry. A new study is the first to connect robust spatial learning with better comprehension of other aspects of mathematics, such as arithmetic. Photo by Jason Smith

“These results suggest that improving children’s spatial thinking at a young age may not only help foster skills specific to spatial reasoning but also improve symbolic numerical representations,” said co-author Susan Levine, a leading authority on spatial and mathematical learning.

“This is important since spatial learning is malleable and can be positively influenced by early spatial experiences,” added Levine, the Stella M. Rowley Professor in Psychology at UChicago.

Gunderson, PhD’12, and the research team reasoned that improved understanding of spatial relationships would help students figure out the approximate location of numbers along a line and could lead to better mathematics performance. They tested their idea with two experiments.

In the first experiment, the team studied 152 first- and second-grade boys and girls from diverse backgrounds in five urban schools. It gave them tests at the beginning and end of the school year, to see how well they could locate numbers on a straight, unmarked line with zero at one end and 1,000 at the other.

At the beginning of the school year, the researchers also assessed children’s spatial knowledge on a task that required them to choose the correct piece from among four alternatives, which could be added to others to complete a square shape. The students with the strongest spatial skills showed the most growth in their number line knowledge over the course of the school year.

In a second experiment, the team showed the relationship among spatial skills, number line knowledge and facility in solving mathematics problems. That study was based on information gathered from a study of 42 children, who were videotaped between the ages of five and eight while having everyday interactions with their parents and caregivers.

Consistent with the results of the first study, this study showed clearly that the children with better spatial skills performed better on number line tests. Importantly, this number line knowledge was related to their later performance on the approximate calculation tests when they were eight years old.

“Improving children’s spatial skills may have positive impacts on their future success in science, technology, engineering or mathematics disciplines, not only by improving spatial thinking but also by enhancing the numerical skills that are critical for achievement in all STEM fields,” Gunderson said.

*Source:  The University of Chicago