The new LRZ “SuperMUC” system was built with IBM System x iDataPlex Direct Water Cooled dx360 M4 servers with more than 150,000 cores to provide a peak performance of up to three petaflops, which is equivalent to the work of more than 110,000 personal computers. Put another way, three billion people using a pocket calculator would have to perform one million operations per second each to reach equivalent SuperMUC performance. Also, a revolutionary new form of hot-water cooling technology invented by IBM allows the system to be built 10 times more compact and substantially improve its peak performance while consuming 40 percent less energy than a comparable air-cooled machine. 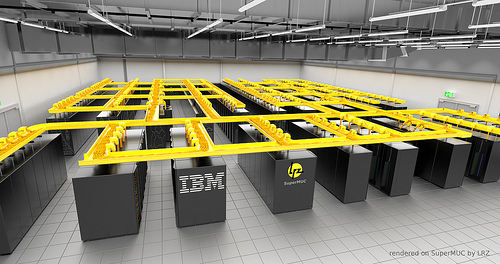 “This year all the electricity consumed by state-funded institutions across Germany are required to purchase 100% sustainable energy,” said Prof. Dr. Arndt Bode, Chairman of the Board, Leibniz Supercomputing Centre. “SuperMUC will help us keep our commitment, while giving the scientific community a best-in-class system to test theories, design experiments and predict outcomes as never before.”

Up to 50 percent of an average air-cooled data center’s energy consumption and carbon footprint today is not caused by computing, but by powering the necessary cooling systems. IBM scientists and developers chose to address this challenge with an innovative concept of hot-water cooling, which eliminates the need for conventional data center air cooling systems. IBM’s hot-water cooling technology directly cools active components in the system such as processors and memory modules with coolant temperatures that can reach as high as 113 degrees Fahrenheit, or 45 degrees Celsius. 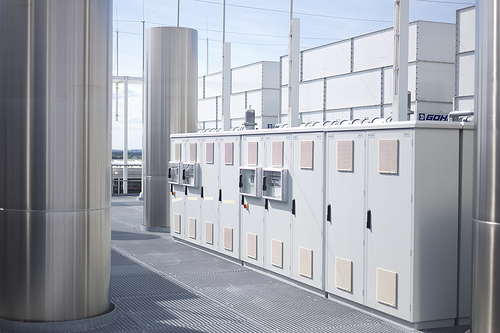 Cooling Towers on the rooftop of the Leibniz-Rechenzentrum. Image credit: IBM

“As we continue to deliver on our long-term vision of a zero emission data center we may eventually achieve a million fold reduction in the size of SuperMUC, so that it can be reduced to the size of a desktop computer with a much higher efficiency than today,” said Dr. Bruno Michel, manager, Advanced Thermal Packaging, IBM Research.

SuperMUC combines its hot-water cooling capability, which removes heat 4,000 times more efficiently than air, with 18,000 energy-efficient Intel Xeon processors. In addition to helping with scientific discovery, the integration of hot-water cooling and IBM application-oriented, dynamic systems management software, allows energy to be captured and reused to heat the buildings during the Winter on the sprawling Leibniz Supercomputing Centre Campus, for savings of one million Euros ($1.25 million USD) per year. 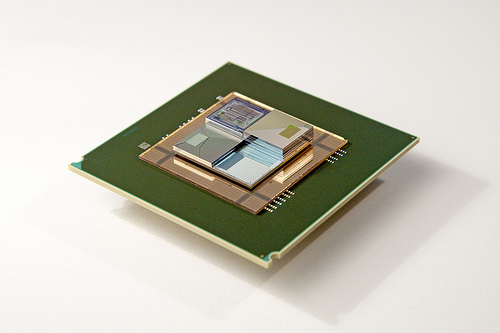 Made in IBM Labs: By 2025, chip stacks with embedded liquid cooling, communications in three dimensions and minimal power consumption will shrink supercomputers to the size of a sugar cube. Image credit: IBM

The SuperMUC system is Europe’s fastest computer, according to the TOP500 list of the world’s fastest supercomputers announced today. This performance will be used to drive a wide spectrum of research — from simulating the blood flow behind an artificial heart valve, to devise quieter airplanes to unearthing new insights in geophysics, including the understanding of earthquakes. The SuperMUC system is also connected to powerful visualization systems, including a large 4K stereoscopic power wall and a five-sided immersive artificial virtual-reality environment or CAVE for visualizing 3D data sets from fields, including Earth science, astronomy and medicine. 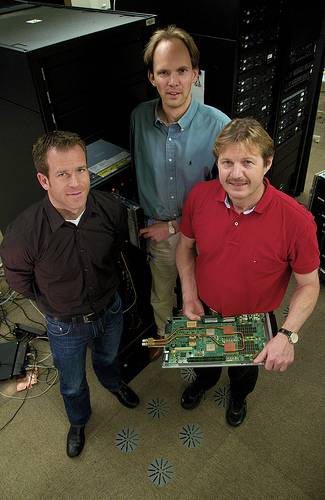 The LRZ is the computer center for Munich’s universities and for the Bavarian Academy of Sciences and Humanities. It takes care of the scientific data network in Munich, offers a variety of data services, and provides high-end computing facilities for the scientific community across Europe. 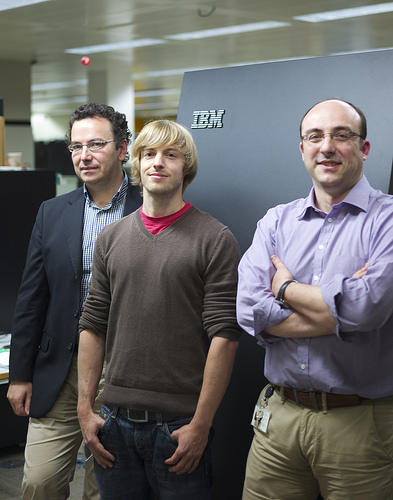 The center’s new SuperMUC system is the largest in Europe and one of the most powerful systems in the world. It is part of the Partnership for Advanced Computing in Europe (PRACE) high-performance computing infrastructure for researchers and industrial institutions throughout Europe. The supercomputer is jointly funded by the German federal government and the state of Bavaria. It will be officially inaugurated in July 2012 at Leibniz Supercomputing Centre in Garching, Germany.