With cameras set up in Sumatra looking for medium- and small-sized wild cats, such as leopards, a research group involving the University of Delaware’s Kyle McCarthy, found images of something else entirely — a rabbit. Not just any ordinary rabbit, but a Sumatran striped rabbit, one of the world’s rarest species and one that had been captured on film only three times before.

There has never been a viable study of the Sumatran striped rabbit and McCarthy, assistant professor in the Department of Entomology and Wildlife Ecology in the College of Agriculture and Natural Resources (CANR), said that while his group plans on continuing their study of small cats, they are now also focusing on the rare rabbit species. 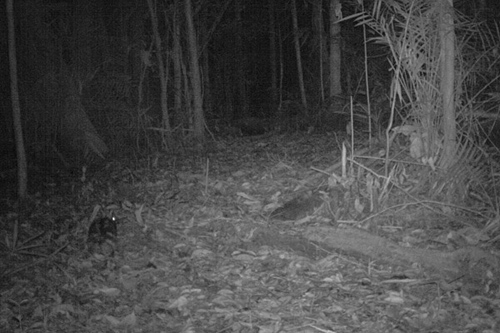 “This is the most data that anybody has compiled on these rabbits ever,” said McCarthy. “The idea would be to go get a better idea of how many there might be in an area and we’re hoping that this can spur that forward.”

For the study, led by Jennifer McCarthy, a doctoral candidate in the Department of Environmental Conservation at the University of Massachusetts Amherst, the group obtained 10 photographs of the Sumatran striped rabbit on two separate occasions in locations 790 meters apart in the Liwa region of Bukit Barisan Seletan National Park.

After obtaining the photographs, the group conducted an informal survey of colleagues who have worked in other protected areas of Sumatra to find out if they had ever seen or documented on film the Sumatran striped rabbit to get a better idea of where the rabbits might be living.

According to Kyle McCarthy, there is a great need for collaboration among the many groups studying animal species in the area because “this is one of those things that can just fly under the radar.”

With disparate researchers in different groups in many different parks, McCarthy said scientists have to collaborate or they could miss out on an important discovery. 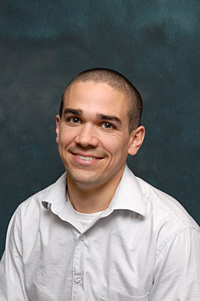 The group found that most of the researchers hadn’t recorded the species, but they did find that scientists in Kerinci Seblat National Park, the largest park in Sumatra, had recently seen the rabbits multiple times.

One of the main factors working in the rabbits’ favor is that the group photographed them in an area that thus far has not been subject to heavy amounts of poaching. “One of the problems is that Sumatra continues to be settled and so we’re going to get more and more pressure around the edges of the parks and we’re going to see more poaching,” said McCarthy. “In other parts of this exact same park, we see a lot of poaching across the boundaries. This part is up high enough that we don’t see as many people and we don’t see as many poachers.” A point that McCarthy wanted to make clear is that most of the poachers are doing so to feed themselves, not as a means to profit.

McCarthy said that one of the reasons the group is so eager to launch a study of the rabbit is that “this could be a good spot to try and conserve them, especially for now, because they haven’t had that poaching pressure yet and so there’s probably a bigger population there.”

For now, McCarthy is just excited to be able to bring focus to a species that has been neglected for too long. “We’ve had a chance to not rediscover a species but, in essence, to bring focus back to a very rare rabbit. Often things like rabbits go overlooked because most people don’t even know there is a Sumatran rabbit. Part of doing field work in remote locations is that we are able to see things like this, and it can be really important for conservation.”

Details of the research and the team’s findings are being published in Oryx, an international wildlife journal. For a first look at the article, see the journal website.

The research was funded by the Mohamed bin Zaved Species Conservation Fund, Panthera and the McCarthy Laboratory in CANR’s Department of Entomology and Wildlife Ecology.