Rare Earth Elements: The World is Rapidly Running Out and China Has Most of The Remaining Supply

Most people have no idea what rare earth elements are, but a wide array of the technologies that we use every single day are dependent on them.

There are 17 key rare earth elements that we rely on every day.

But there is a huge problem.  China owns more than 85 percent of the known global reserves of rare earth elements.  Right now, the rest of the world is absolutely dependent on China’s exports of these metals.  Without these Chinese exports, the western world would quickly run out of these precious resources.

But in just a few years, the rapidly expanding Chinese economy will gobble up the entire domestic production of Chinese rare earth elements.  So what will the rest of the world do at that point?

This is a major problem that you aren’t hearing a lot about in the mainstream news.

But analysts are now predicting that by 2012 this could be a tremendous crisis. 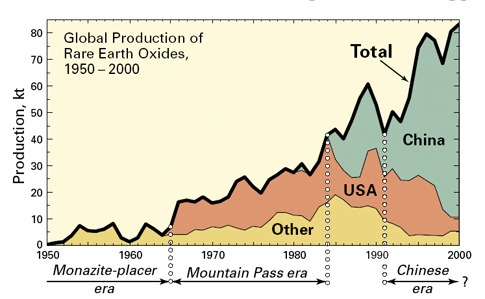 So exactly what are rare earth elements?

Well, rare earth elements are a group of 17 relatively rare chemical elements that you can find on the periodic table.  These rare metals have names you may not be familiar with such as lanthanum, cerium, tantalum, neodymium and europium.

As mentioned above, they are used in products that we use every day such as laptop computers, iPhones, magnets, catalytic converters, night vision goggles and wind turbines.  These metals are not well known, but they are absolutely crucial to our way of life.

So what is going to happen when we start running out of them?

According to The Independent, the move towards “green technology” will cause a dramatic increase in demand for rare earth metals in the years ahead.  In fact, it is being projected that the world will need 200,000 tons of rare earth elements by the year 2014.

But analysts fear that China may drop exports of rare earth elements to exactly zero tons by 2012.Can anyone else see a problem forming?

Last summer, one leaked report indicated that Chinese authorities were already considering a complete export ban of the most critical of the rare earth elements.

But while we may speculate when the complete ban is coming, the truth is that China has already moved to dramatically cut back exports of the metals.

China recently announced that they have cut export quotas for rare earth elements by 72 percent for the second half of 2010.  The U.S. government reacted quite angrily to this news and warned that this could potentially cause a trade war.

“Countries and companies that have or plan to develop industries that need rare earth minerals to make products are concerned about China’s growing consumption, which they fear will eliminate China’s exports of rare earths.”

So what needs to be done?

Well, nations and corporations that use rare earth elements need to start weaning themselves off the supply coming from China.

But there is a huge problem.

That cannot be done overnight.

According to a recent report by the U.S. Government Accountability Office, building an independent U.S. supply chain for rare earth elements could take up to 15 years.

So what in the world will we do until then?

That is a very good question.

The truth is that those running the U.S. government are just not very good at thinking strategically.

But it almost fell into Chinese hands unnoticed.

You see, the mine in Mountain Pass is owned by Unocal, and in 2005 a Chinese bid for Unocal almost succeeded.Yes, the Chinese were trying to strengthen their monopoly on rare earth elements and it almost worked.

Not that they don’t have the rest of the world in a very difficult situation already.

The truth is that if China cut off the export of all rare earth elements to the rest of the world tomorrow, it would throw the global economy into absolute chaos.

That is a lot of power for China to have.

Let’s just hope they don’t use it any time soon.