A Cellular Housekeeper, and Potential Target of Obesity Drugs, Caught in Action

Scientists from the U.S. Department of Energy’s Lawrence Berkeley National Laboratory have obtained the closest look yet of how a gargantuan molecular machine breaks down unwanted proteins in cells, a critical housekeeping chore that helps prevent diseases such as cancer.

They pieced together the molecular-scale changes the machine undergoes as it springs into action, ready to snip apart a protein.

Their work provides valuable clues as to how the molecular machine, a giant enzyme called tripeptidyl peptidase II, keeps cells tidy and disease free. It could also inform the development of obesity-fighting drugs. A closely related enzyme in the brain can cause people to feel hungry even after they eat a hearty meal.

About the image: New clues emerge about how a molecular machine breaks down unwanted proteins in cells thanks to work conducted at Berkeley Lab’s Advanced Light Source. In this atomic-scale model of the molecular machine, tripeptidyl peptidase II, the cyan ribbon depicts the skeleton of the giant molecule. The grey enclosure represents the lower resolution surface and is included to aid visualization. Image credit: Berkeley Lab

“We can now better understand how this very important enzyme carries out its work, which has not been described at a molecular scale until now,” says Bing Jap, a biophysicist in Berkeley Lab’s Life Sciences Division. He led the research with scientists from the University of California at Berkeley and Germany’s Max Planck Institute of Biochemistry.

The scientists report their research August 1 in an advance online publication of the journal Nature Structural & Molecular Biology.

Tripeptidyl peptidase II is found in all eukaryotic cells, which are cells that a have membrane-bound nucleus. Eukaryotic cells make up plants and animals. The enzyme’s chief duty is to support the pathway that ensures that cells remain healthy and clutter free by breaking down proteins that are misfolded or have outlived their usefulness.

It’s not always so helpful, however. A variation of the enzyme in the brain degrades a hormone that makes people feel satiated after a meal. When this hormone becomes unavailable, a person can eat and eat without feeling full, which can lead to obesity. 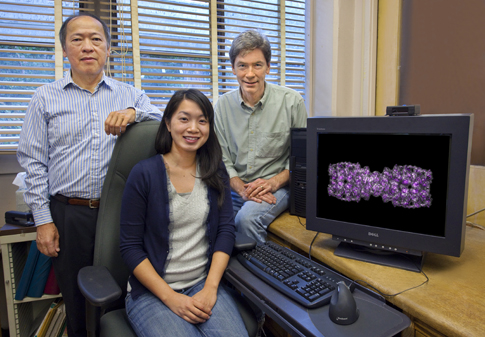 About the image: From left, Bing Jap, Crystal Chuang, and Peter Walian with the structure of a molecular machine that could inform the development of obesity-fighting drugs. Chuang is the first author of a paper that describes how the team derived the structure. She was a graduate student in Jap’s UC Berkeley research group when she contributed to the research. Image credit: Roy Kaltschmidt, Berkeley Lab Public Affairs.

Tripeptidyl peptidase II is also the largest protein-degrading enzyme, or protease, in eukaryotic cells. It’s more than 100 times larger than most other proteases.

Scientists don’t know how this behemoth of an enzyme targets and degrades specific proteins — but it’s good that the enzyme is so selective. If it degraded every protein it comes across, the cell would quickly die.

“We want to know how it’s regulated, how it selects proteins to degrade, and how it cuts them apart,” says Jap.

To help answer these questions, his team determined the changes the molecular machine undergoes as it readies itself for action. Using x-ray crystallography, they obtained an atomic-scale resolution structure of the molecular machine in its inactive state. This work was conducted at Berkeley Lab’s Advanced Light Source, a national user facility that generates intense x-rays to probe the fundamental properties of substances.

They also developed a lower-resolution, three-dimensional map of the molecular machine in its activated state, meaning it’s poised to snip apart a protein. This structure was determined using cryo-electron microscopy.

They then merged these two structures together, one dormant and the other ready to pounce on a protein.

“When we dock these structures, we can begin to ascertain the changes the enzyme undergoes as it transitions from an inactive to an active state,” says Peter Walian, a scientist in Berkeley Lab’s Life Sciences Division who also contributed to the research.

This first molecular-scale vantage of the enzyme in action offers insights into how it works. For example, the scientists found that only very small proteins can fit in the chamber the enzyme uses to break down proteins.

“This sheds light on how the enzyme targets specific proteins,” says Jap.

They also learned more about how the enzyme uses a molecular ruler to mince proteins into pieces that only span three residues.

“This work is yielding valuable clues as to how the giant enzyme carries out very fundamental biological processes, with more insights to come,” says Jap. “The obesity-related hormone is one of many interesting targets of the protease. There are likely other proteins and peptides, yet to be discovered, that are processed by this protease.”