Rare Earth Elements in U.S. Not So Rare 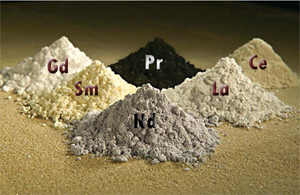 Approximately 13 million metric tons of rare earth elements (REE) exist within known deposits in the United States, according to the first-ever nationwide estimate of these elements by the U.S. Geological Survey.

This estimate of domestic rare earth deposits is part of a larger report that includes a review of global sources for REE, information on known deposits that might provide domestic sources of REE in the future, and geologic information crucial for studies of the availability of REE to U.S. industry.

“This is the first detailed assessment of rare earth elements for the entire nation, describing deposits throughout the United States,” commented USGS Director Marcia McNutt, Ph.D. “It will be very important, both to policy-makers and industry, and it reinforces the value of our efforts to maintain accurate, independent information on our nation’s natural resources. Although many of these deposits have yet to be proven, at recent domestic consumption rates of about 10,000 metric tons annually, the US deposits have the potential to meet our needs for years to come.”

REE are a group of 16 metallic elements with similar properties and structures that are essential in the manufacture of a diverse and expanding array of high-technology applications. Despite their name, they are relatively common within the earth’s crust, but because of their geochemical properties, they are not often found in economically exploitable concentrations.

Ninety-six percent of REE produced globally now comes from China. New REE mines are being developed in Australia, and projects exploring the feasibility of economically developing additional REE deposits are under way in the United States, Australia, and Canada; successful completion of these projects could help meet increasing demand for REE, the report said.

REE are important ingredients in high-strength magnets, metal alloys for batteries and light-weight structures, and phosphors. These are essential components for many current and emerging alternative energy technologies, such as electric vehicles, photo-voltaic cells, energy-efficient lighting, and wind power. REEs are also critical for a number of key defense applications.

This report is part of a larger, Department of Defense-funded study of how the United States, and the Department of Defense in particular, use REE, as well as the status and security of domestic and global supply chains.  In addition, the USGS National Minerals Information Center maintains statistics on global mineral production, trade, and resources that include rare earth elements.

The new USGS report, which provides an overview of domestic REE resources and possibilities for utilizing those resources, is available on line at https://pubs.usgs.gov/sir/2010/5220. To learn more about REE, please visit the National Minerals Information Center’s REE webpage.