In a paradox typical of the quantum world, JILA scientists have eliminated collisions between atoms in an atomic clock by packing the atoms closer together. The surprising discovery, described in the Feb. 3 issue of Science Express, can boost the performance of experimental atomic clocks made of thousands or tens of thousands of neutral atoms trapped by intersecting laser beams

JILA is jointly operated by the National Institute of Standards and Technology (NIST) and the University of Colorado Boulder.

JILA scientists demonstrated the new approach using their experimental clock made of about 4,000 strontium atoms. Instead of loading the atoms into a stack of pancake-shaped optical traps as in their previous work, scientists packed the atoms into thousands of horizontal optical tubes. The result was a more than tenfold improvement in clock performance because the atoms interacted so strongly that, against all odds, they stopped hitting each other. The atoms, which normally like to hang out separately and relaxed, get so perturbed from being forced close together that the ensemble is effectively frozen in place.

“The atoms used to have the whole dance floor to move around on and now they are confined in alleys, so the interaction energy goes way up,” says NIST/JILA Fellow Jun Ye, leader of the experimental team. Ye also is an adjoint professor of physics at CU-Boulder. 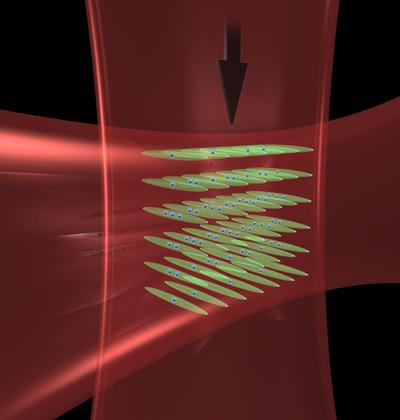 How exactly does high interaction energy—the degree to which an atom’s behavior is modified by the presence of others—prevent collisions? The results make full sense in the quantum world. Strontium atoms are a class of particles known as fermions. If they are in identical energy states, they cannot occupy the same place at the same time—that is, they cannot collide. Normally the laser beam used to operate the clock interacts with the atoms unevenly, leaving the atoms dissimilar enough to collide. But the interaction energy of atoms packed in optical tubes is now higher than any energy shifts that might be caused by the laser, preventing the atoms from differentiating enough to collide.

The idea was proposed by JILA theorist Ana Maria Rey and demonstrated in the lab by Ye’s group. Other co-authors of the study were Matthew D. Swallows, Michael Bishof, Yige Lin, Sebastian Blatt and Michael J. Martin.

Given the new knowledge, Ye believes his clock and others based on neutral atoms will become competitive in terms of accuracy with world-leading experimental clocks based on single ions (electrically charged atoms). The JILA strontium clock is currently the best performing experimental clock based on neutral atoms and, along with several NIST ion and neutral atom clocks, a possible candidate for a future international time standard. The devices provide highly accurate time by measuring oscillations (which serve as “ticks”) between the energy levels in the atoms.

In addition to preventing collisions, the finding also means that the more atoms in the clock, the better. “As atom numbers increase, both measurement precision and accuracy increase accordingly,” Ye says.

To trap the atoms in optical tubes, scientists first use blue and red lasers to cool strontium atoms to about 2 microKelvin in a trap that uses light and magnetic fields. A vertical lattice of light waves is created using an infrared laser beam that spans and traps the atom cloud. Then a horizontal infrared laser beam is turned on, creating optical tube traps at the intersection with the vertical laser.

The research was supported by the Defense Advanced Research Projects Agency (grant administered by the Army Research Office), NIST, National Science Foundation and the Air Force Office for Scientific Research.