Groundbreaking research by a team of UCLA physicians and engineers demonstrates that prostate cancer — long identifiable only through painful, hit-or-miss biopsies — can be diagnosed far more easily and accurately using a new image-guided, targeted biopsy procedure.

Traditionally, prostate tumors have been found through so-called blind biopsies, in which tissue samples are taken systematically from the entire prostate in the hopes of locating a piece of tumor — a technique that dates back to the 1980s. But the cancer now appears detectable by direct sampling of tumor spots found using magnetic resonance imaging, or MRI, in combination with real-time ultrasound, the researchers say.

The findings are published Dec. 10 in the early online edition of the Journal of Urology and are scheduled for print publication in the journal’s January issue.

The UCLA study indicates that the MRI–ultrasound fusion biopsy, which is much more accurate than a conventional blind biopsy, may lead to a reduction in the number of prostate biopsies performed and could allow for the early detection of serious prostate cancers. 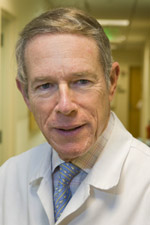 The study involved 171 men who were either undergoing active surveillance to monitor slow-growing prostate cancers or who, despite prior negative biopsies, had persistently elevated levels of prostate-specific antigen (PSA), a protein produced by the prostate that can indicate the presence of cancer . The UCLA biopsies using the new technique were done in about 20 minutes in an outpatient clinic setting under local anesthesia.

Nearly all of the 1 million prostate biopsies performed annually in the U.S. are triggered by elevations in PSA levels, and about 240,000 new cases of prostate cancer are discovered each year. Thus, about 75 percent of biopsies are negative for cancer. However, many men with negative biopsies but elevated PSA levels may still harbor malignant tumors — tumors missed by conventional biopsies, said the study’s senior author, Dr. Leonard S. Marks, a professor of urology and director of UCLA’s active surveillance program.

“Early prostate cancer is difficult to image because of the limited contrast between normal and malignant tissues within the prostate,” Marks said. “Conventional biopsies are basically performed blindly because we can’t see what we’re aiming for. Now, with this new method, which fuses MRI and ultrasound, we have the potential to see the prostate cancer and aim for it in a much more refined and rational manner.”

The new targeting process is the result of four years of work funded by the National Cancer Institute and based at the Clark Urology Center at UCLA.

Since the mid-1980s, prostate cancer has been diagnosed using trans-rectal ultrasound to sample the prostate. Unlike most other cancers, prostate cancer is the only major malignancy diagnosed without actually visualizing the tumor as a biopsy is done, Marks said.

With the advent of sophisticated MRI, the ability to image the prostate improved and provided a picture of tumors within the organ. However, attempting to biopsy the prostate with the patient inside an MRI machine proved to be cumbersome, expensive and time-consuming. But with the development of the new MRI–ultrasound fusion process, the biopsy can now be performed in a clinic setting.

In the study, the volunteers first underwent MRI to visualize the prostate and any lesions. That information was then fed into a device called the Artemis, which electronically fuses the MRI pictures with real-time, three-dimensional ultrasound, allowing the urologist to see the lesion during the biopsy.

“With the Artemis, we have a virtual map of the suspicious areas placed directly onto the ultrasound image during the biopsy,” Marks said. “When you can see a lesion, you’ve got a major advantage of knowing what’s really going on in the prostate. The results have been very dramatic, and the rate of cancer detection in these targeted biopsies is very high. We’re finding a lot of tumors that hadn’t been found before using conventional biopsies.”

Prostate cancer was found in 53 percent of 171 study volunteers. Of those tumors found using the fusion biopsy technique, 38 percent had a Gleason score of greater than seven, indicating an aggressive tumor and one more likely to spread than a tumor with lower scores. Once prostate cancer spreads, it’s much more difficult to treat, and survival decreases.

Robert Meier, a 58-year-old high school art teacher from Visalia, Calif., enrolled in Marks’ study after three of his prostate biopsies came back negative for cancer despite his climbing PSA levels.

In 2008, Meier tore his rotator cuff, and as part of his pre-surgery exam, blood tests were done. His PSA was at six — four or lower is considered normal. His doctor sent him to an urologist, who performed tests to rule out everything else that could be causing high PSA levels, including infection and an enlarged prostate. The doctor found nothing. Meanwhile Meier’s PSA climbed to eight.

A biopsy was performed and was negative. Meier’s PSA jumped to nine, and yet another biopsy came back negative. When his PSA reached 11.7, another round of biopsies was ordered.

“These biopsies can be extremely painful and I was put in the hospital several times so they could be done under general anesthesia,” Meier said. “It takes about a month to recover.”

Like his PSA levels, Meier’s anxiety was also rising. If he didn’t have prostate cancer, why were his levels going up?

After a second opinion in Santa Barbara and months of being tested and treated with a medicine designed to shrink his prostate and lower his PSA, Meier was referred to UCLA and Marks in 2011. By then, his PSA was nearly 18, up more than 10 points in three years. An MRI ultimately revealed a prostate lesion, and he underwent a biopsy using the Artemis device. He did have cancer, and it was aggressive.

“Dr. Marks told me that I had a cancer that could spread and it needed to come out now,” Meier said. “He told me that at my relatively young age and the severity of the tumor, I had no choice.”

Meier’s prostate and 24 nearby lymph nodes were removed robotically at UCLA in February by Dr. Arnold Chin, an assistant professor of urology. Follow-up tests show that Meier is cancer free today.

“This program works,” Meier said. “I had jumped through all these hoops and had all these tests with two different doctors and they found nothing. It took UCLA to determine that I had an aggressive cancer that could have killed me. I feel like I was in very good hands at UCLA.”

“Prostate lesions identified on MRI can be accurately targeted with MR-Ultrasound fusion biopsy in a clinic setting using local anesthesia,” the study states. “Biopsy findings correlate with the level of suspicion on MRI. Targeted prostate biopsy has the potential to improve the diagnosis of prostate cancer and may aid in the selection of patients for active surveillance and focal therapy.”

The study was supported by the National Cancer Institute (RO1CA158627). The MRI and ultrasound fusion technology used in the study is described in this video.