The MU study is not claiming that BPA is safe, but that the previous series of studies are not reproducible.

COLUMBIA, Mo. — Following a three-year study using more than 2,800 mice, a University of Missouri researcher was not able to replicate a series of previous studies by another research group investigating the controversial chemical BPA. The MU study is not claiming that BPA is safe, but that the previous series of studies are not reproducible. The MU study, published in the Proceedings of the National Academy of Sciences, also investigated an estrogenic compound found in plants, genistein, in the same three-year study.

“Our findings don’t say anything about the positive or negative effects of BPA or genistein,” said Cheryl Rosenfeld, associate professor of biomedical sciences in MU’s Bond Life Science Center. “Rather, our series of experiments did not detect the same findings as reported by another group on the potential developmental effects of BPA and genistein when exposure of young occurs in the womb.”

Creating reliable data on the effects of the chemicals on mice is important to human health since people are frequently exposed to BPA and genistein and humans share similar biological functions with mice. BPA is a chemical used in certain plastic bottles and may be found in the lining of some canned goods and receipt paper. Genistein occurs naturally in soy beans and is sold as a dietary supplement. Previous research by Rosenfeld, as well as Frederick VomSaal, professor of biological science at MU, and others has suggested that the chemicals may have adverse effects on many animals, including humans. 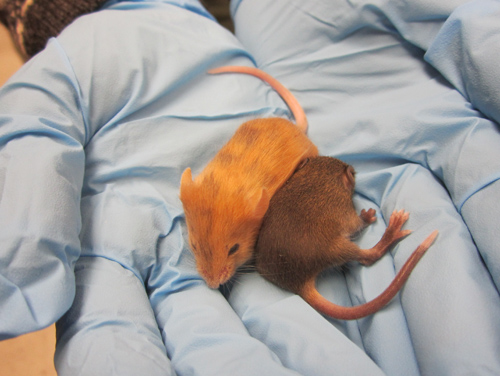 An example of an agouti offspring on left; next to a brown sibling. Image credit: Tim Wall, MU News Bureau

Researchers who conducted the original series of experiments, which Rosenfeld repeated, claimed that exposure to BPA and genistein resulted in yellow coat color, or agouti, offspring that were more susceptible to obesity and type 2 diabetes compared to their brown coat color, healthy siblings. However, Rosenfeld and her team did not obtain the same results when repeating the study over a three-year period.

After failing to repeat the original experiments findings with similar numbers of animals, Rosenfeld’s group extended the studies to include animal numbers that surpassed the prior studies to verify that their findings were not a fluke and to provide sufficient number of animals to ensure that significant differences would be detected if they existed. However, even these additional numbers of animals and extended experiments failed to reproduce the earlier findings. However, the current studies demonstrate that a maternal diet enriched in estrogenic compounds leads to a greater number of offspring that express an agouti gene compared to those that do not, even though equal ratios should have been born.

“This finding suggests that certain uterine environments may favor animals with a ‘thrifty genotype’ meaning that the agouti gene of mice may help them survive in unfavorable uterine environments over those mice devoid of this gene, Yet, the downside of this expression of the agouti during early development is that the animals may be at risk for later metabolic disorders, such as obesity and diabetes” Rosenfeld said. “In this aspect, humans also have an agouti gene that encodes for the agouti signaling protein (ASIP) that is expressed in fat tissue and pancreas, and there is some correlation that obese individuals exhibit greater expression of this gene compared to leaner individuals. Therefore, the agouti gene may have evolved to permit humans the ability to survive famine, but its enhanced expression may also potentiate metabolic diseases under bountiful food conditions.”

While the research casts doubt on the previous study, Rosenfeld said that by understanding the genetic profile of the mice in the first series of studies, scientists could learn more about the correlation between certain genes and obesity. This could eventually influence prevention and treatment programs for patients with diabetes and other obesity-related diseases in humans. 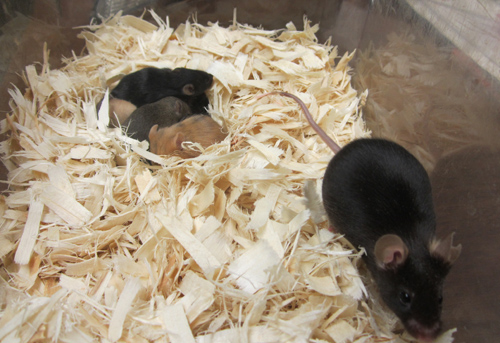 Some of the mice used in Rosenfeld's study. Mother is on the right. Note the color difference in the offspring. Image credit: Tim Wall, MU News Bureau

For more details on the discovery, please visit: https://bondlsc.missouri.edu/news/story/63/1

Exposure to BPA Has Been Underestimated, New MU Research Says