Counting, in addition to reciting, should be emphasized in early childhood education to establish foundation for future academic success

COLUMBIA, Mo. – Along with reciting the days of the week and the alphabet, adults often practice reciting numbers with young children. Now, new research from the University of Missouri suggests reciting numbers is not enough to prepare children for math success in elementary school. The research indicates that counting, which requires assigning numerical values to objects in chronological order, is more important for helping preschoolers acquire math skills.

“Reciting means saying the numbers from memory in chronological order, whereas counting involves understanding that each item in the set is counted once and that the last number stated is the amount for the entire set,” said Louis Manfra, an assistant professor in MU’s Department of Human Development and Family Studies. “When children are just reciting, they’re basically repeating what seems like a memorized sentence. When they’re counting, they’re performing a more cognitive activity in which they’re associating a one-to-one correspondence with the object and the number to represent a quantity.” 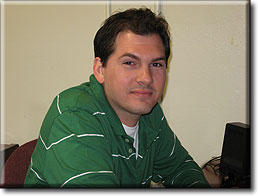 Louis Manfra, assistant professor of human development and family studies. Manfra found that, among low-income children, those who could recite and count to 20 in preschool had the highest math scores in first grade. Image credit: University of Missouri

Manfra analyzed data from more than 3,000 children from low-income households in order to determine if the children’s reciting and counting abilities in preschool affected their first-grade math scores. He found that students who could recite and count to 20 in preschool had the highest math scores in first grade; however, less than 10 percent of the children in the study could count and recite to 20.

“Counting gives children stronger foundations when they start school,” Manfra said. “The skills children have when they start kindergarten affect their trajectories through early elementary school; therefore, it’s important that children start with as many skills as possible.”

Previous research has shown that, in low-income families, parents often think children’s educations are the responsibility of teachers, while teachers expect parents to teach some essential skills at home, Manfra said.

“These low-income children aren’t learning math skills anywhere because parents think the children are learning them at school, and teachers think they’re learning them at home,” Manfra said. “This is a problem because it gives parents and teachers the idea that it’s not their responsibility to educate the children, when it’s everyone’s responsibility. This is problematic because, when the children enter kindergarten and are at lower math levels, they don’t have the foundational skills needed to set them on paths for future success.”

Parents and teachers should integrate counting into all aspects of children’s daily activities so they can master the skill, Manfra said.

“You can learn anything anywhere, and this is very true for counting,” Manfra said. “When adults read books with children, they can count the ducks on the page. They might count the leaves that fall to the ground outside or the number of carrots at lunchtime.”

The Department of Human Development and Family Studies is part of the MU College of Human Environmental Sciences. The study, “Associations between Counting Ability in Preschool and Mathematic Performance in First Grade among a Sample of Ethnically Diverse, Low-Income Children,” will be published in an upcoming issue of the Journal of Research in Childhood Education.