EAST LANSING, Mich. — Women’s bias against male strangers increases when women are fertile, suggesting prejudice may be partly fueled by genetics, according to a study by Michigan State University psychology researchers.

“Our findings suggest that women’s prejudice, at least in part, may be a byproduct of their biology,” said Melissa McDonald, a doctoral student and lead author on the paper.

The researchers conducted scientific studies with two groups of women that investigated how women’s implicit attitudes toward men change across the menstrual cycle. They found that fertile women were more biased against men of different races and men of different social groups than men of their own group. 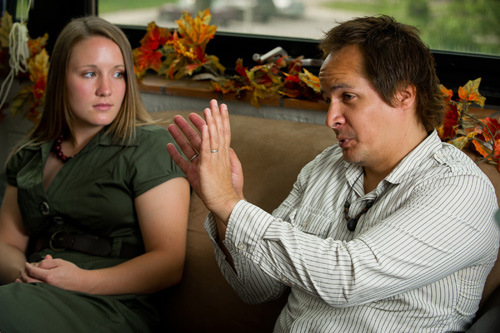 Research by Melissa McDonald, doctoral student in psychology, and Carlos Navarrete, assistant professor of psychology, explores the link between fertility and prejudice. Photo by G.L. Kohuth

Importantly, though, the increase in bias occurred only for women who perceived the men as physically threatening, said Carlos David Navarrete, assistant professor of psychology and research team leader. Navarrete, an evolutionary psychologist, and his team explore big-picture topics such as morality and race relations.

Previous research has focused on men within the same racial and social groups. In those cases, women who were fertile had more positive impressions of men who were physically imposing. These results suggest that the same traits that fertile women find attractive in men of their same group may actually lead to more negativity against men when those traits are associated with men of a different racial or social group, McDonald said.

McDonald and Navarrete said their team’s findings are consistent with the idea that women’s prejudice may reflect the workings of an evolved psychological system that once functioned to protect them from sexual coercion, particularly when the costs are highest – that is, when women are fertile.

To minimize this threat, McDonald said, women may be more biased against men who have posed the greatest risk to their reproductive choice. Male strangers may have posed considerable risk of sexual coercion throughout human history, she said, as sexual aggression against women by male “invaders” has been a pervasive problem since ancient times.

“This may be deeply ingrained at psychological levels,” Navarrete said, “and may manifest itself particularly if women believe men from different racial and nonracial groups to be physically imposing and when women are most fertile.”