*Changes in population, including aging and urbanization, could affect global carbon dioxide emissions*

Changes in the human population, including aging and urbanization, could significantly affect global emissions of carbon dioxide over the next 40 years, according to research results published this week.

The research, results of which appear in a paper in the journal Proceedings of the National Academy of Sciences (PNAS), was conducted by scientists at the National Center for Atmospheric Research (NCAR), the International Institute for Applied Systems Analysis (IIASA) and the National Oceanographic and Atmospheric Administration (NOAA).

It was funded by the National Science Foundation (NSF), a European Young Investigator’s Award, and the Hewlett Foundation.

“By examining the relationship between population dynamics and greenhouse gas emissions, this groundbreaking research increases our understanding of how human behaviors, decisions and lifestyles will determine the path of future climate change,” says Sarah Ruth, program director in NSF’s Division of Atmospheric and Geospace Sciences, which funds NCAR. 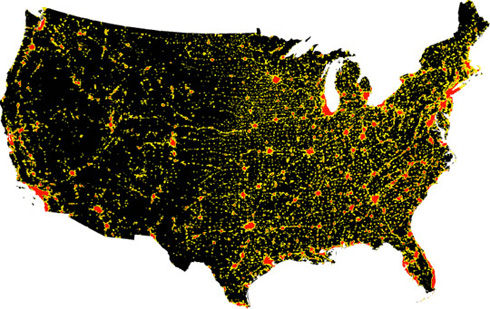 By mid-century it is estimated that global population could rise by more than three billion people, with most of that increase occurring in urban areas.

The study showed that a slowing of that population growth could contribute to significantly reducing greenhouse gas emissions.

The researchers found that if population follows one of the slower growth paths foreseen as plausible by demographers at the United Nations, by 2050 it could account for 16 to 29 percent of the emission reductions thought necessary to keep global temperatures from causing serious impacts.

The effect of slower population growth on greenhouse gas emissions would be even larger by the end of the century.

“If global population growth slows down, it is not going to solve the climate problem, but it can make a contribution, especially in the long term,” says the paper’s lead author, Brian O’Neill, an NCAR scientist. 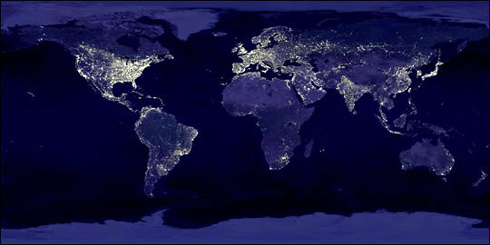 About the image: Map of the night-time city lights of the world, growing in extent each year. Image credit: NASA

O’Neill’s co-author, IIASA scientist Shonali Pachauri, says that slower population growth will have different influences, depending on where it occurs.

Scientists have long known that changes in population will have some effect on greenhouse gas emissions, but there has been debate on how large that effect might be.

The researchers sought to quantify how demographic changes influence emissions over time, and in which regions of the world.  They also went beyond changes in population size to examine the links between aging, urbanization, and emissions.

The team found that growth in urban populations could lead to as much as a 25 percent rise in projected carbon dioxide emissions in some developing countries.

The increased economic growth associated with city-dwellers was directly correlated with increased emissions, largely due to the higher productivity and consumption preferences of an urban labor force.

In contrast, aging can reduce emissions levels by up to 20 percent in some industrialized countries. Older populations are associated with lower labor force participation, and the resulting lower productivity leads to lower economic growth.

“Demography will matter to greenhouse gas emissions over the next 40 years,” says O’Neill. “Urbanization will be particularly important in many developing countries, especially China and India, and aging will be important in industrialized countries.”

The researchers worked with projections showing that population aging will occur in all regions of the world, a result of people living longer and declines in fertility.

The authors developed a set of economic growth, energy use, and emissions scenarios, using a new computer model (the Population- Environment-Technology model, or PET).

To capture the effects of future demographic change, they distinguished between household types, looking at age, size, and urban vs. rural location.

In addition, they drew on data from national surveys covering 34 countries and representative of 61 percent of the global population to estimate key economic characteristics of household types over time, including labor supply and demand for consumer goods.

The authors also suggest that developers of future emissions scenarios give greater consideration to the implications of urbanization and aging, particularly in the U.S., European Union, China and India.

“Further analysis of these trends would improve our understanding of the potential range of future energy demand and emissions,” says O’Neill.

The researchers caution that their findings do not imply that policies affecting aging or urbanization should be implemented as a response to climate change, but rather that better understanding of these trends would help anticipate future changes.