Angelou encourages University community to be ‘a rainbow in the clouds’

Maya Angelou had a special message for the enthusiastic audience that came to hear the renowned Renaissance woman and civil rights activist speak during a sold-out event held Friday evening, Feb. 22, in the University of Delaware’s Bob Carpenter Center.

“I’m going to remind you that you have already been paid for,” Angelou said. “Whether you are white or black or of Asian or Spanish ancestry, gay or straight, you don’t have to apologize to history for anything.”

The remarks, which brought the audience to its feet for one of many rousing displays of affection and appreciation, capped an evening of music, personal reflections and the reading of works by Angelou, Paul Laurence Dunbar and Langston Hughes.

Angelou started by singing a line from the song, God Put a Rainbow in the Clouds, inspired by a passage from the Bible’s book of Genesis. 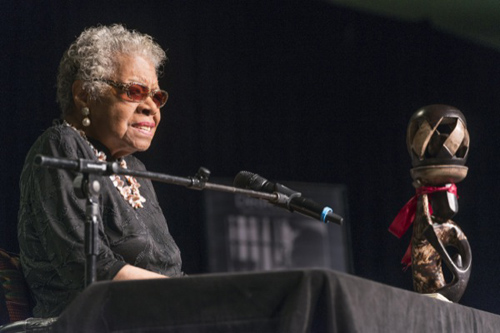 The appearance by the poet, novelist and educator as part of the Black History Month Extravaganza 2013 at UD evoked memories of a previous visit to campus on May 25, 1996, when she was the spring Commencement speaker.

“Even then, I felt that the University of Delaware was a rainbow in the clouds,” Angelou said. “The truth is, that a number of people who were students 16 years ago, and even now, are the first people in their families to enter and stay in and graduate from an institute of higher education.”

Angelou urged members of the UD and surrounding communities to build on that tradition. 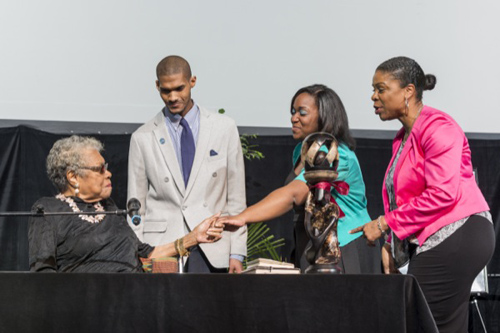 Maya Angelou is presented the gift of a statue by N’Kosi Oates, Brooklynn Hitchens and Kasandra Moye, director of the Center for Black Culture. Photos by Kathy F. Atkinson and Evan Krape

Ever the poet, Angelou invoked the memory of her favorite poet, Paul Laurence Dunbar (1872-1906), by reciting lines from Sympathy, the poem from which she found the title for her most famous work, I Know Why The Caged Bird Sings.

“When his wing is bruised and his bosom sore, —

When he beats his bars and he would be free;

It is not a carol of joy or glee,

But a prayer that he sends from his heart’s deep core,

But a plea, that upward to Heaven he flings —

I know why the caged bird sings!”

In reading from one of the works of 19th century female poet Anne Spencer, A Letter to my Sister, Angelou told students in the audience to go to the University of Delaware Library and ask the librarian about a select group of American writers.

“You also need to tell them that Maya Angelou told you to ask for some 19th century African American women poets,” Angelou said “They will know where to find them.”

In returning to the 20th century, Angelou read Harlem Sweeties, written by another of her favorite African American writers, Langston Hughes. 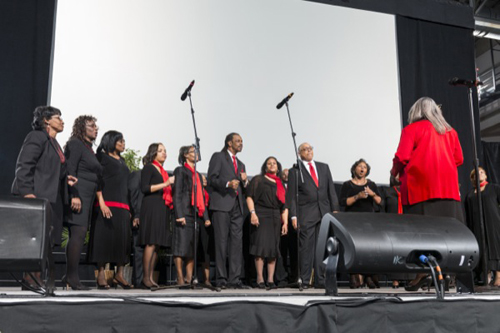 Earlier in the program, Angelou was presented with an award from the University’s Center for Black Culture, a co-sponsor of the event.

“We would like to present Dr. Angelou with this African statue with the globe of the world and a mother and child, because we feel that you, Dr. Angelou, have mothered so many,” said Kasandra Moye, director of the center. “You are a living legend and a contemporary force through which caged cultures learn colorful life lessons, and progressive ideals delivered through a beautiful bird’s song.”

Also making the event an evening of celebration were singers from the Canaan Baptist Choir of New Castle, whose spirited gospel showcase filled the building with joyous song and had members of the audience on their feet.

N’Kosi Oates, president of UD’s Cultural Programming Advisory Board and a junior political science and communications major, introduced Angelou, and Brooklynn Hitchens, president of the Black Student Union and a senior English and Black American Studies major, read one of Angelou’s most famous poems, Still I Rise. 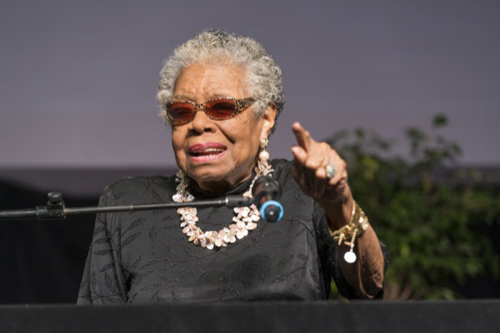 Maya Angelou called on members of the UD community to be “rainbows in the clouds.” Photos by Kathy F. Atkinson and Evan Krape

Angelou thanked the presenters and the audience for their warmth and kindness and closed by reciting the last lines from Still I Rise.

“Out of the huts of history’s shame

Up from a past that’s rooted in pain

Welling and swelling I bear in the tide.

Leaving behind nights of terror and fear

Into a daybreak that’s wondrously clear

Bringing the gifts that my ancestors gave,

I am the dream and the hope of the slave.

Supporting the Center for Black Culture and the Cultural Programming Advisory Board in presenting the event were the Office of Student Life, Office of Residence Life, University Student Centers, the Office of Equity and Inclusion, and the departments of English, Theatre and Back American Studies.