Seventy-five years after one of the world’s first working cyclotrons was handed to the London Science Museum, it has returned to its birthplace in the Berkeley hills, where the man who invented it, Ernest O. Lawrence, helped launch the field of modern particle physics as well as the national laboratory that would bear his name, Lawrence Berkeley National Laboratory.

On Jan. 9, 1932 the brass cyclotron—which measures 26 inches from end to end and whose accelerating chamber measures just 11 inches in diameter—was successfully used to boost protons to energies of 1.22 million electron volts. Its return to Berkeley Lab caps a decades-long saga in which various parties endeavored to secure the cyclotron’s return from London, but the persistence of Pamela Patterson, who chronicles Berkeley Lab’s history as managing editor of its website, finally paid off. 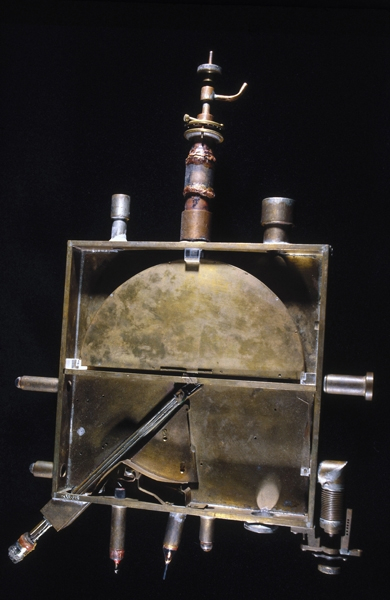 It was Lawrence himself who personally donated the cyclotron to the Science Museum for display in March 1938. “The Royal Society was still the most prestigious body for many scientists,” Patterson says. “American science was new by comparison, and Lawrence was eager to demonstrate what was now accepted as his groundbreaking accomplishment. Just a year later he would win the Nobel Prize for his invention.”

Lawrence was a brilliant young physicist recruited by UC Berkeley from Yale University in 1928. He started drawing up plans for a circular particle accelerator, a configuration that enabled particle energies to be boosted more effectively and efficiently than the linear-shaped accelerators that preceded it. He called his cyclotron a “proton merry-go-round.” The general principle was to whirl protons, the nuclei of hydrogen atoms, around in a circle over and over again to boost their energies, and then cast them toward a target like stones from a slingshot. 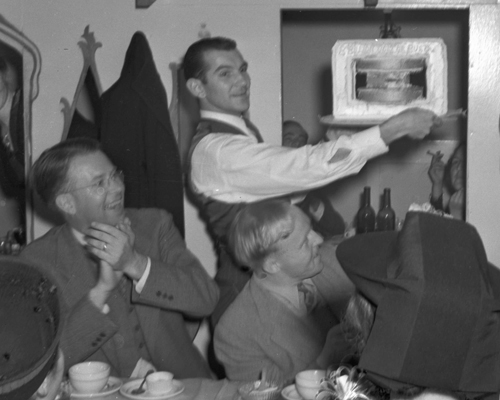 Ernest O. Lawrence (left), Harold Walke, and Paul Aebersold (with cyclotron-shaped cake), on Nov. 17, 1939 at a dinner at an Albany, CA restaurant in honor of Lawrence winning the Nobel Prize. (Photo by Donald Cooksey)

Particle accelerators propel electrically charged particles to speeds approaching that of light. Increasing the speed of a particle increases its kinetic energy. Smashing highly energized particles into a target or other particles shatters them and releases their contents for inspection. In this fashion, accelerators serve as incredibly powerful “microscopes,” allowing scientists to observe our universe at the level where its deepest secrets are kept.

Lawrence’s cyclotrons would become popularized as “atom smashers” and were the forerunners of the Large Hadron Collider—5.4 miles in diameter—and other modern-day accelerators. Some cyclotrons are now used in particle therapy to treat cancer.

In 1931, he succeeded in getting a five-inch cyclotron to boost protons to 80,000 electron volts, but he knew he needed a machine to break the 1 million electron volt barrier. He attained that goal with the 11-inch that has now been returned to Berkeley Lab. It was patented in 1932 and seven years later he would be awarded the Nobel Prize for physics for his cyclotron discoveries.

In 1955, nearly 20 years after Lawrence’s namesake laboratory was established in the Berkeley hills (the Lawrence Livermore National Laboratory was not established until 1952), the University of California first started making inquiries into securing the cyclotron’s return.

In 1980 then Lab-director David Shirley made a more serious request for the cyclotron’s return, enlisting the help of the University of California. “He wanted it back for the Lab’s 50th anniversary,” Patterson says. “And in 1981 he did succeed in bringing back it, briefly, but through a series of mishaps and red tape it wound up being returned to the UK museum. ” 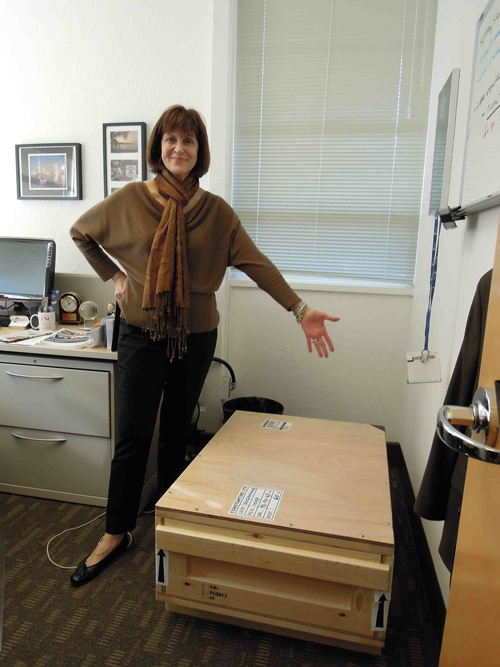 Patterson made her first inquiries for its return in 1995, two years after starting work at Berkeley Lab, at the behest of the University of California. However, she was stymied by more unexpected bureaucracy. “They couldn’t decide who owned it—UC or the Department of Energy, which didn’t even exist at the time of Lawrence’s invention,” she says. “Nor did its predecessor, the Atomic Energy Commission. They went looking for it in the inventory system, and of course it wasn’t there.”

That ground things to a halt for another 15 years. “Because no one could determine with certainty who owned it, no one could really speak up for it, and eventually it was forgotten again,” Patterson says.

Suddenly in 2010, the Museum contacted Patterson via email out of the blue and asked her to sign a loan agreement. In the intervening years, she had learned that Lawrence never had a formal loan agreement with the Museum—it was all done with a gentleman’s handshake. “We were coming up on the Laboratory’s 80th anniversary, and at that moment, I just said, ‘No, we’ve waited over 70 years for this. It’s time for the cyclotron to come home.’” 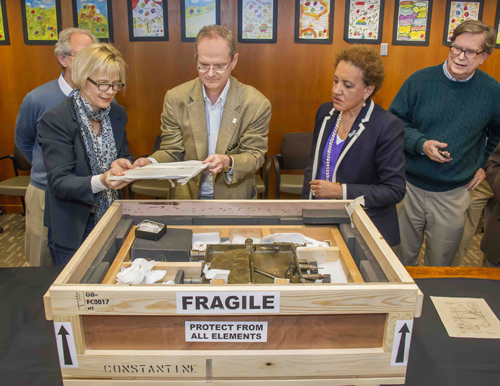 The Museum somewhat reluctantly agreed to return it; however another unexpected bureaucratic roadblock emerged. Since 9/11, homeland security rules had changed and cyclotrons were not allowed to be brought into the country. “The customs people and the museum shipper called me and said, they can’t ship it—it’s a threat to national security,” Patterson says. “I said, has anyone looked at it? It was built in 1931. It’s a very crude historic artifact. It doesn’t work. They said, if you can get a letter from a government agency stating that, we’ll consider it.”

She sought assistance from Aundra Richards, head of the Department of Energy (DOE) site office that oversees Berkeley Lab, as well as UC legal and administrative officials. The question about ownership arose again; it was ultimately resolved with the decision that UC owned the cyclotron, but they would cede authority to Richards to ask for its return on behalf of DOE and the Laboratory.

It took another year and a half of investigation and correspondence before it was finally cleared by customs for shipment. By then, even the London Science Museum had expressed its excitement at its return to Berkeley, asking for pictures of it in its “new” home. On Feb. 15, in a conference room at Berkeley Lab, Lab Director Paul Alivisatos, along with other Lab officials and physicists, opened the wooden crate that revealed a vital and long-missing piece of Lab history. 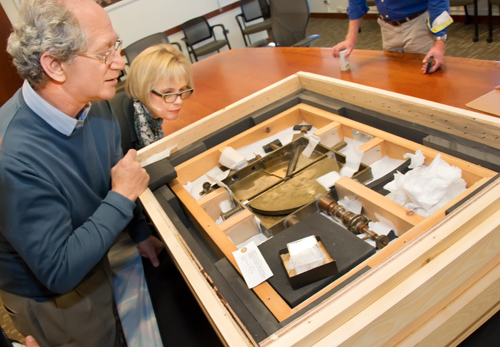 The cyclotron will be displayed in the lobby of Building 50, the Lab’s main administrative building, in a secure case alongside Lawrence’s original desk and precious few other historical artifacts from that era. His two five-inch cyclotrons that preceded the 11-inch left the Lab long ago—one is at the Smithsonian in Washington, D.C. while the other is just up the hill at the Lawrence Hall of Science.

“This is really amazing,” said Natalie Roe, director of Berkeley Lab’s physics division, after inspecting Lawrence’s invention. “This is the great, great granddaddy of all the circular accelerators now in widespread use all over the world, not only for physics research but for medical uses as well.”