COLUMBIA, Mo. – When bacteria attack plants, they often inject harmful proteins into the host plants’ cells to weaken and suppress natural defenses. However, in some plants, bacteria attack once they’ve recognized the plant cells as a potential host. Now, researchers at the University of Missouri have identified and replicated the process that allows the bacteria—known mostly for attacking tomatoes—to invade its host. This discovery could lead to natural anti-infective treatments that work with food-producing plants to enhance resistance to harmful bacteria in the field.

“When potential pathogens enter host plants, a race ensues to deploy their respective disease and defense mechanisms,” said Scott Peck, associate professor of biochemistry and a researcher in the Bond Life Sciences Center at MU. “Scientists have paid a lot of attention to how plants and other organisms recognize and respond to invading microbes, but little attention has been paid to how the signals transmitted by the organisms that are being attacked play a role in the process. Our work focuses on suppressing the signals from the plant that cue the bacteria to attack.” 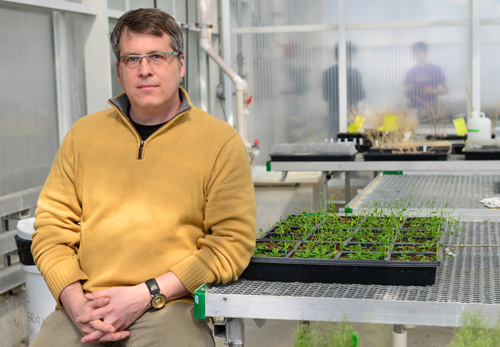 Scott Peck. “Peck identified and replicated the process that allows the bacteria—known mostly for attacking tomatoes—to attack its host. This discovery could lead to natural anti-infective treatments that work with food-producing plants to enhance resistance to harmful bacteria in the field.” Image credit: University of Missouri

Peck and fellow researchers, including Jeffrey Anderson, a research scientist, and Ying Wan, a post-doctoral fellow in the Department of Biochemistry at the University of Missouri, found that plants produce a molecular signal that invites an attack from a pathogen.

The signaling system in the plant triggers a structure in bacteria similar in shape to a syringe which is used to “inject” the bacteria’s harmful proteins into its target. The MU research team found a group of five acids from plants that trigger the bacteria.

“We know that microbes can disguise themselves by altering the proteins or molecules that the plant uses to recognize the bacteria, as a strategy for evading detection,” Peck said. “Our results show that the plant can disguise itself from pathogen recognition by removing the signals needed by the pathogen to become fully virulent.”

The findings will help scientists grow plants that are more resistant to infection and create natural defenses for plants that could render bacteria harmless.

The findings come from a collaboration of scientists led by Peck and researchers from the Biological Sciences Division at Pacific Northwest National Laboratory, and the Environmental Molecular Sciences Laboratory and the Department of Energy’s Environmental Molecular Sciences Laboratory. The study, “Decreased abundance of type III secretion system-inducing signals in Arabidopsis mkp1 enhances resistance against Pseudomonas syringae,”was published in the Proceedings of the National Academy of Sciences and was funded by the National Science Foundation.