Pinwheel ‘living’ crystals and the origin of life

ANN ARBOR — Simply making nanoparticles spin coaxes them to arrange themselves into what University of Michigan researchers call ‘living rotating crystals’ that could serve as a nanopump. They may also, incidentally, shed light on the origin of life itself.

The researchers refer to the crystals as ‘living’ because they, in a sense, take on a life of their own from very simple rules.

Sharon Glotzer, the Stuart W. Churchill Collegiate Professor of Chemical Engineering, and her team found that when they spun individual nanoparticles in a simulation—some clockwise and some counterclockwise—the particles self-assembled into an intricate architecture.

The team discovered the behavior while investigating methods to make particles self-assemble—one of the major challenges in nanotechnology—without complicated procedures. When the pieces are a thousand times smaller than a grain of sand, normal techniques for building structures are no longer effective.

For this reason, researchers like Glotzer are exploring ways to make order develop naturally from disorder, much like what may have occurred at the very beginnings of life.

“If we can understand that, not only can we begin to imagine new ways to make materials and devices, but also we may begin to understand how the first living structures emerged from a soup of chemicals,” said Glotzer, who is also a professor of materials science and engineering, macromolecular science and engineering, physics, and applied physics.

“One way biology approaches the challenge of assembly is by constantly feeding building blocks with energy. So, that’s what we did with nanoparticles.” 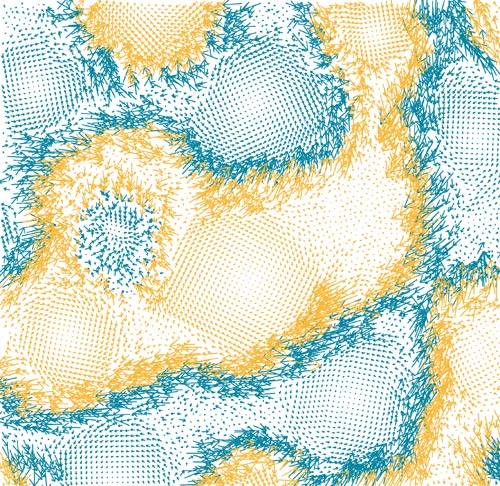 U-M researchers have found in a simulation that simply inducing nanoparticles to spin causes them to self assemble into ‘living rotating crystals.’ The size and direction of the arrows indicate the movements of the particles, while the yellow and blue colors represent clockwise and counterclockwise spinners, respectively. The arrows arranged in orderly grids are particles that have formed rotating crystals, while the large, aligned arrows at the boundaries show how particles are driven along the interfaces. Image courtesy Sharon Glotzer

Recently, researchers in the field have found that if particles are given energy for some basic motion, such as moving in one direction, they can begin to influence one another, forming groups. Glotzer’s team looked at what would happen if the particles all were made to rotate.

“They organize themselves,” said Daphne Klotsa, a research fellow in Glotzer’s lab. “They developed collective dynamics that we couldn’t have foreseen.”

The team’s computer simulation can be imagined as two sets of pinwheels on an air hockey table. The air pushing up from the table drives some of the pinwheels clockwise, and others counterclockwise. When the pinwheels are tightly packed enough that their blades catch on one another, the team found that they begin to divide themselves into clockwise and counter-clockwise spinners—a self-organizing behavior known among researchers as phase separation.

“The important finding here is that we get phase separation without real attraction,” Klotsa said.

She calls the self-sorting counterintuitive because no direct forces push the same—spin pinwheels together or push opposite-spinners apart.

The separation occurs because of the way the pinwheel blades collide. While a pair of pinwheels may be spinning in the same direction, where their blades might meet, they’re actually moving in opposite directions. This means that the blades will push into one another and stick together, causing the pair of pinwheels to rotate as one, at least briefly.

In contrast, the blades of opposite spinners are moving in the same direction where they meet, so they don’t stick together. Since same-spinning pinwheels spend more time linked up, they gradually accumulate into groups.

When the pinwheels divide into clockwise and counterclockwise tribes, the boundary between the groups becomes a thoroughfare for particles in the mix that aren’t spinning. The blades at the boundary push these nonspinning particles along the border, making them less likely to dive back into the denser collections of pinwheels. The team said this phenomenon could potentially be harnessed as a sort of nanopump to transport objects in a device.

While the computer simulations were in two dimensions, as though on a flat surface, the team anticipates that rotating particles could also grow into ‘living,’ three-dimensional crystals. The particles would be free to turn their spin axes in any direction, so they could eventually form a 3D liquid crystal with aligned axes.

The results appeared online in this week’s issue of Physical Review Letters and will be presented at a March 6 meeting of the American Physical Society. This work was funded by the U.S. Department of Energy.