The University of Delaware is leading an interdisciplinary project aimed at unraveling the biology of a durable form of disease resistance in maize.

A grant from the National Science Foundation Plant Genome Research Program (NSF-PGRP) has brought together a team of experts in breeding, genetics, pathology, bioimaging and computer science to generate new knowledge that can be leveraged in the staple crop when breeding for disease resistance.

“To date, we’ve focused on dissecting the genetics, trying to figure out what the genes are,” said Wisser. “In some cases we’ve been successful, but there are many more genes we have not yet identified; we still don’t understand how the genes work or how they act together to cause resistance.” 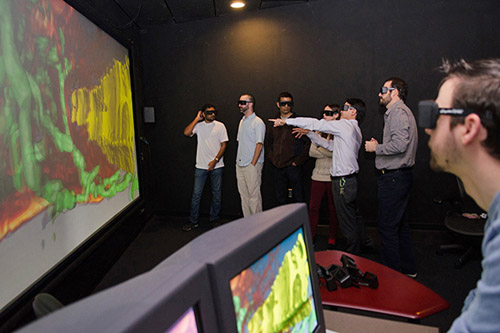 Researchers make use of the Bio-Imaging Center to study disease resistance in maize. Photo by Danielle Quigley

A significant component of the project at UD consists of the researchers adapting bioimaging technologies to study natural genetic variation in disease resistance. For this, three of the labs are collaborating.

In controlled environments, Rebecca Nelson, professor at Cornell University, and Peter Balint-Kurti, research geneticist with USDA-ARS at NCSU, perform genetic experiments from which infected tissue is sampled and shipped off to UD.

Wisser and Jeff Caplan, director of the BioImaging Center at the Delaware Biotechnology Institute (DBI), work together to analyze microscopic images of the samples.

Studying hundreds of tissue samples, the team captures numerous snapshots across each sample in microscopic detail and in 3D. Then, from more than 1,000 separate images taken on each sample, the researchers use computational techniques to reconstruct the images into their original form.

With these large format images, the team initiated a collaboration with Chandra Kambhamettu, professor in UD’s Department of Computer and Information Sciences and director of the Video/Image Modeling and Synthesis (VIMS) Laboratory, to adapt methods from computer vision research that allow features within the images — such as the number of cells the pathogen has infected — to be characterized. 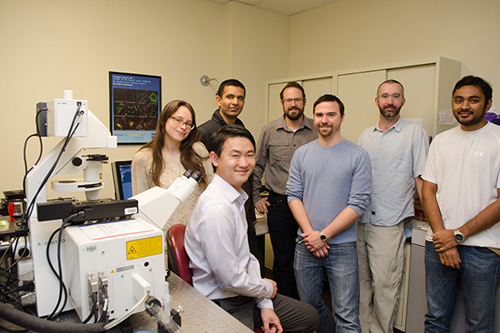 Wisser summarized the technique’s important effect, saying, “We’re not just taking a picture of the surface, we’re actually taking pictures as though we are peeling layers off the tissue one at a time. Also, because of the relatively large area of the leaf we can now image, we can observe plant-pathogen interactions at an unprecedented scale and gain a better understanding of variation in the interactions between pathogens and plants.

“Essentially, what we’ve been able to achieve is the development of an imaging and analysis platform that allows us to quantitatively examine the effects of different genes at the tissue and cellular level. It’s eye-opening, and we’ve only begun scratching the surface.”

The team is simultaneously trying to shine light on the specific genes that underlie disease resistance.

Jim Holland, research geneticist with USDA-ARS at NCSU, leads a component of the project on genetic mapping. Holland, Balint-Kurti, Nelson and Wisser collaborate on sequencing and comparing the genomes of over 250 maize varieties using advanced techniques in genetic mapping, when researchers try to determine the specific genes that control a characteristic like plant disease resistance.

There is typically uncertainty in the process. Therefore, Balint-Kurti and Nick Lauter, assistant professor from ISU, are validating the effects of these genes by searching for extreme mutations and deregulating the gene. If disruptions of the gene cause a change in the plants’ resistance to disease, then they know they are onto something.

Lauter and Alicia Carriquiry, professor from ISU, are also working with Cornell and NCSU to study how the genes are regulated when the pathogens infect. A gene may be turned on or off in response to infection, which further clues the researchers in to the genes that underlie resistance.

Looking at all of these results together allows the researchers to understand the genes associated with resistance, how they function in terms of their internal wiring, how they connect to each other to form a network, and how that network gives rise to disease resistance or susceptibility.

The work on this project addresses issues that relate to the global sustainability of agriculture. Pathogens often evolve quickly to overcome the resistance genes in the cultivars breeders produce, resulting in a constant tug-of-war between the breeder and the pathogen.

This basic research project intersects with applied efforts to have greater durability in disease resistance. The knowledge, methods and resources from the project can be leveraged in the breeding of varieties that have longer lasting resistance, resulting in better food security.

Wisser said that while the group is using maize for its study, the results could have positive effects on many plants. “The things we find are not just applicable to maize and diseases we’re working on here, but there are also some general rules that are likely to surface. So we think that our project has more to offer than helping to solve the issues associated with these specific diseases and the crop that’s the focus of the project.”