COLUMBUS, Ohio – The more afraid a person is of a spider, the bigger that individual perceives the spider to be, new research suggests.

In the context of a fear of spiders, this warped perception doesn’t necessarily interfere with daily living. But for individuals who are afraid of needles, for example, the conviction that needles are larger than they really are could lead people who fear injections to avoid getting the health care they need.

A better understanding of how a phobia affects the perception of feared objects can help clinicians design more effective treatments for people who seek to overcome their fears, according to the researchers. 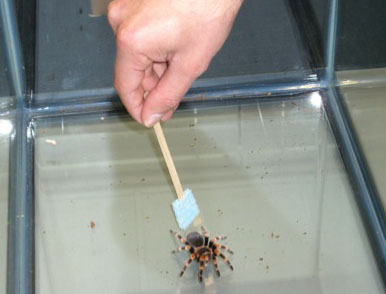 As part of the exposure treatment, research participants are asked to guide the spiders around a glass tank with a probe. Images courtesy of Michael Vasey, Ohio State University

“If one is afraid of spiders, and by virtue of being afraid of spiders one tends to perceive spiders as bigger than they really are, that may feed the fear, foster that fear, and make it difficult to overcome,” said Michael Vasey, professor of psychology at Ohio State University and lead author of the study.

“When it comes to phobias, it’s all about avoidance as a primary means of keeping oneself safe. As long as you avoid, you can’t discover that you’re wrong. And you’re stuck. So to the extent that perceiving spiders as bigger than they really are fosters fear and avoidance, it then potentially is part of this cycle that feeds the phobia that leads to its persistence.

“We’re trying to understand why phobias persist so we can better target treatments to change those reasons they persist.”

The study is published in a recent issue of the Journal of Anxiety Disorders. 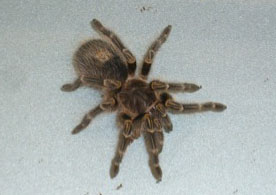 The study uses five varieties of tarantulas ranging in size from about 1 to 6 inches long. Images courtesy of Michael Vasey, Ohio State University

The researchers recruited 57 people who self-identified as having a spider phobia. Each participant then interacted at specific time points over a period of eight weeks with five different varieties of tarantulas varying in size from about 1 to 6 inches long.

The spiders were contained in an uncovered glass tank. Participants began their encounters 12 feet from the tank and were asked to approach the spider. Once they were standing next to the tank, they were asked to guide the spider around the tank by touching it with an 8-inch probe, and later with a shorter probe.

Throughout these encounters, researchers asked participants to report how afraid they were feeling on a scale of 0-100 according to an index of subjective units of distress. After the encounters, participants completed additional self-report measures of their specific fear of spiders, any panic symptoms they experienced during the encounters with the spiders, and thoughts about fear reduction and future spider encounters.

An analysis of the results showed that higher average peak ratings of distress during the spider encounters were associated with estimates that the spiders were larger than they really were. Similar positive associations were seen between over-estimates of spider size and participants’ higher average peak levels of anxiety, higher average numbers of panic symptoms and overall spider fear. These findings have been supported in later studies with broader samples of people with varying levels of fear of spiders.

“It would appear from that result that fear is driving or altering the perception of the feared object, in this case a spider,” said Vasey, also the director of research for the psychology department’s Anxiety and Stress Disorders Clinic. “We already knew fear and anxiety alter thoughts about the feared thing. For example, the feared outcome is interpreted as being more likely than it really is. But this study shows that even perception is altered by fear. In this case, the feared spider is seen as being bigger. And that may serve as a maintaining factor for the fear.”

The approach tasks with the spiders are a classic example of exposure therapy, a common treatment for people with phobias. Though this therapy is known to be effective, scientists still do not fully understand why it works. And for some, the effects don’t last – but it is difficult to predict who will have a relapse of fear, Vasey said.

He and colleagues are studying these biased perceptions as well as attitudes with hopes that the new knowledge will enhance treatment for people with various phobias. The work suggests that fear not only alters one’s perception of the feared thing, but also can influence a person’s automatic attitude toward an object. Those who have developed an automatic negative attitude toward a feared object might have a harder time overcoming their fear.

Though individuals with arachnophobia are unlikely to seek treatment, the use of spiders in this research was a convenient way to study the complex effects of fear on visual perception and how those effects might cause fear to persist, Vasey noted.

“Ultimately, we are interested in identifying predictors of relapse so we can better measure when a person is done with treatment,” he said.

This work is supported by the National Institute of Mental Health.