Researchers from the Georgia Tech Research Institute (GTRI) and Bennett Aerospace Inc., a North Carolina advanced-technology company, have won a contract to develop the capability for testing a new type of radar jammer for the U.S. Navy.  Called the Next Generation Jammer, this novel device will utilize phased-array radar technology in ways that could provide U.S. military aircraft greater protection from ground-to-air missiles.

GTRI is working with Bennett Aerospace on innovative technologies that will be necessary to thoroughly test the Next Generation Jammer. Bennett Aerospace recently received a $750,000 Small Business Innovation Research (SBIR) Phase II award for development of a Phased Array Next-Generation Jammer Testbed. This new award, from the Naval Air Command, follows a $150,000 Phase I contract that involved the same technology.

The GTRI team is supporting Bennett Aerospace in the development of both software and hardware essential to the testbed’s operation, said Daniel Leatherwood, a principal research engineer who is leading the effort for Georgia Tech.

“We’re developing measurement systems capable of effectively testing the new jammer,” Leatherwood said. “Evaluating this jammer will require the collection of antenna-pattern measurements under a huge number of different scenarios.” 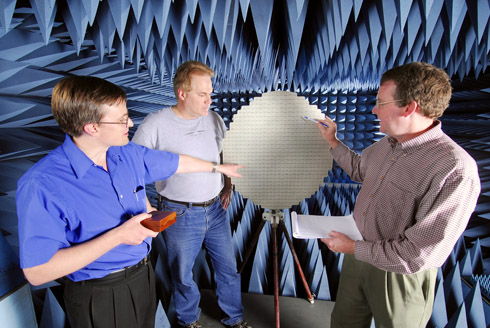 The Next Generation Jammer seeks to block enemy radar by transmitting multiple radar beams and rapidly re-steering those beams as needed. For this reason, Leatherwood said, the GTRI team must understand exactly what is taking place electromagnetically as the radar signals change direction.

GTRI researchers are particularly interested in examining transient effects – bursts of radio-frequency energy that occur as phased-array radar beams move quickly from one direction to another. Transients appear over very short periods of time and demonstrate unusual performance characteristics.

“Our challenge is to study transients closely and predict their effects,” Leatherwood said. “We’re developing software algorithms that will let us collect radar-signal patterns very quickly, allowing us to fully detect transients and determine ways of making the jammer most effective.”

On the hardware side, he added, the team is investigating newer types of sensors, as well as traditional sensing devices. The aim is to pinpoint technologies that will be most useful for this kind of testing.

The Next Generation Jammer itself is being developed by major defense contractors, including BAE Systems, Boeing Co., Northrop Grumman Corp., Raytheon Co. and ITT Corp.  When complete, the system could be used on aircraft such as the EA-18G Growler and the F-35, as well as on unmanned aerial vehicles.

The next-generation system may use high levels of electromagnetic energy to support highly effective jamming of enemy radar, said Douglas Bennett, CEO of Bennett Aerospace. As a result, he added, work under the current SBIR Phase II contract will also focus on the design of a novel indoor test facility capable of handling large amounts of energy.

“Currently, there’s a dearth of testing facilities that can deal with these kinds of energy levels,” Bennett said. “It’s our hope that, if the Phase II results are positive, our current team will be centrally involved in the eventual building of one or more entire testing facilities for the Next Generation Jammer.”

The GTRI team consists of Leatherwood, Roger Hasse, John McKenna and Barry Mitchell.  Leatherwood brings expertise in antenna design, Hasse in near-field-range measurements, and Mitchell and McKenna have extensive experience in antenna measurement systems.  The team will make use of a number of GTRI facilities, including the Electromagnetic Test and Evaluation Facility, a multi-purpose wideband resource.

“The Next Generation Jammer doesn’t involve traditional antenna-measurement problems, so existing approaches are not sufficient to fully characterize the system,” Mitchell said. “It would not be possible to do this job without a firm understanding of all the aspects of conventional measurement technology – plus other significant experience that GTRI has gained from long-term involvement in numerous defense-related programs.”