SAN FRANCISCO — The northernmost mummified forest ever found in Canada is revealing how plants struggled to endure a long-ago global cooling.

Researchers believe the trees — buried by a landslide and exquisitely preserved 2 to 8 million years ago — will help them predict how today’s Arctic will respond to global warming.

They also suspect that many more mummified forests could emerge across North America as Arctic ice continues to melt. As the wood is exposed and begins to rot, it could release significant amounts of methane and carbon dioxide into the atmosphere — and actually boost global warming.

Joel Barker, a research scientist at Byrd Polar Research Center and the School of Earth Sciences at Ohio State University and leader of the team that is analyzing the remains, will describe early results at the American Geophysical Union meeting in San Francisco on Friday, December 17.

Over the summer of 2010, the researchers retrieved samples from broken tree trunks, branches, roots, and even leaves — all perfectly preserved — from Ellesmere Island National Park in Canada. 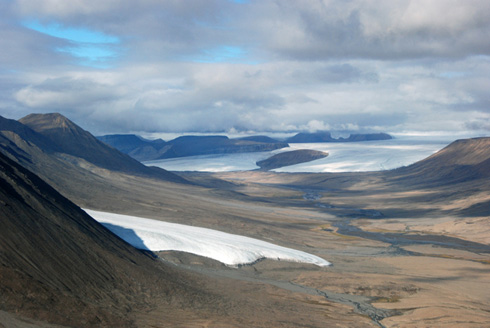 Ellesmere Island National Park in Canada. Ohio State University researchers and their colleagues have discovered the remains of a mummified forest that lived on the island 2 to 8 million years ago, when the Arctic was cooling. The remains could offer clues to how today’s Arctic will respond to global warming. Photo by Joel Barker, courtesy of Ohio State University

“Mummified forests aren’t so uncommon, but what makes this one unique is that it’s so far north. When the climate began to cool 11 million years ago, these plants would have been the first to feel the effects,” Barker said. “And because the trees’ organic material is preserved, we can get a high-resolution view of how quickly the climate changed and how the plants responded to that change.”

Barker found the deposit in 2009, when he was camping on Ellesmere Island for an unrelated research project. He followed a tip from a national park warden, who had noticed some wood sticking out of the mud next to a melting glacier. This summer, he returned with colleagues for a detailed study of the area.

Analysis of the remains has only just begun, but will include chemical and DNA testing. 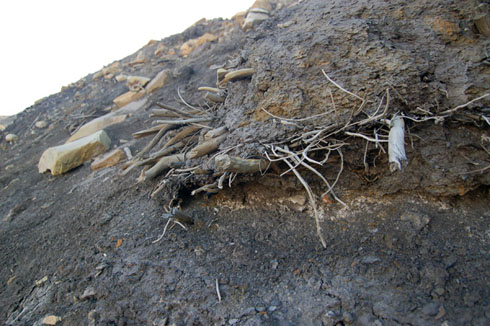 An outcropping of mummified tree remains on Ellesmere Island in Canada. A melting glacier revealed the trees, which were buried by a landslide 2 to 8 million years ago, when the Arctic was cooling. The remains could offer clues to how today’s Arctic will respond to global warming. Photo by Joel Barker, courtesy of Ohio State University

For now, the researchers have identified the species of the most common trees at the site — spruce and birch. The trees were at least 75 years old when they died, but spindly, with very narrow growth rings and under-sized leaves that suggest they were suffering a great deal of stress when they were alive.

“These trees lived at a particularly rough time in the Arctic,” Barker explained. “Ellesmere Island was quickly changing from a warm deciduous forest environment to an evergreen environment, on its way to the barren scrub we see today. The trees would have had to endure half of the year in darkness and in a cooling climate. That’s why the growth rings show that they grew so little, and so slowly.”

Colleagues at the University of Minnesota identified the wood from the deposit, and pollen analysis at a commercial laboratory in Calgary, Alberta revealed that the trees lived approximately 2 to 8 million years ago, during the Neogene Period. The pollen came from only a handful of plant species, which suggests that Arctic biodiversity had begun to suffer during that time as well.

The team is now working to identify other mummified plants at the site, scanning the remains under microscopes to uncover any possible seeds or insect remains.

Now that the forest is exposed, it’s begun to rot, which means that it’s releasing carbon into the atmosphere, where it can contribute to global warming.

Team member David Elliot, professor emeritus of earth sciences at Ohio State, said that the mummified forest on Ellesmere Island doesn’t pose an immediate threat to the environment, though. 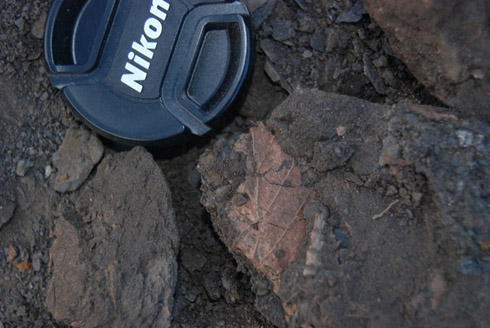 A mummified birch leaf discovered on Ellesmere Island in Canada. Ohio State University researchers and their colleagues have discovered the remains of a mummified forest that lived on the island 2 to 8 million years ago, when the Arctic was cooling. The remains could offer clues to how today’s Arctic will respond to global warming. Photo by Joel Barker, courtesy of Ohio State University.

“I want to be clear — the carbon contained in the small deposit we’ve been studying is trivial compared to what you produce when you drive your car,” he said. “But if you look at this find in the context of the whole Arctic, then that is a different issue. I would expect other isolated deposits to be exposed as the ice melts, and all that biomass is eventually going to return to carbon dioxide if it’s exposed to the air.”

“It’s a big country, and unless people decide to walk all across the Canadian Arctic, we won’t know how many deposits are out there,” he added.

Other collaborators on the project include Yu-Ping Chin, professor of earth sciences at Ohio State, and Joel Jurgens and Robert Blanchette, both plant pathologists at the University of Minnesota.

This research was funded by an EArly-concept Grant for Exploratory Research from the National Science Foundation.