Former prime minister Brian Mulroney, the man entrepreneur Peter Munk described as “one of our greatest statesmen,” attributed much of his success – and Canada’s under his leadership – to the personal relationships he and his ambassador cultivated with leaders south of the border.

Mulroney spoke at a University of Toronto conference, Diplomacy in the Digital Age, Oct. 13, an event held in honour of Alan Gotlieb, the former ambassador to the United States who served three prime ministers.

“The desk of the Canadian prime minister holds many files but two absolutely dominate the priorities: first, national unity, and second, international relations,” Mulroney said, noting that “Without unity, we have no Canada,” and without friendly relations with the president of the United States, there is far less chance of making a major impact. Mulroney had a close relationship with U.S. president Ronald Reagan and also worked well with his successor, George H.W. Bush.

During the years following the Second World War, said Mulroney, Canada “began to punch above its weight in the world and emerged an influential player on global security.”

This was due, partly, he noted, to a dearth of competition as many countries rebuilt their infrastructures and economies. Today, however, these countries are “very much alive today and they seek access to the undisputed world leader, the president of the United States.” With the collapse of Communism, the competition for attention in Washington became even fiercer. 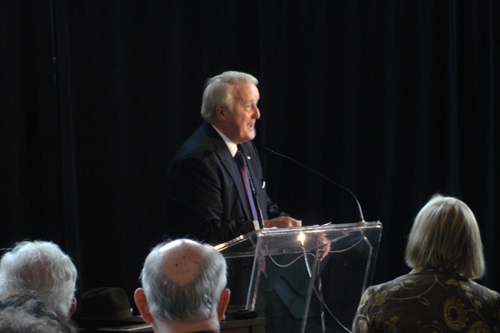 Brian Mulroney emphasized the importance of personal relationships in global affairs in a speech at the University of Toronto. (photo by Elaine Smith)

In building such a relationship, the prime minister is advised and informed by his ambassador to Washington, and Mulroney lauded Gotlieb for his exceptional skills there. He suggested that this relationship is as crucial today as it was during his tenure as prime minister.

“As American difficulties increase, we can and should resist the temptation to become smug,” he said. “It’s amusing to note that in some quarters of our city, our relations with the president of the United States are viewed with scorn and alarm.

“A relationship many nations would treasure is treated with superciliousness.”

Mulroney views such an attitude as shortsighted and says Canadians should not fear for the country’s independence in thought or action.

“Serious Americans know we are a different country and respect that,” he said.

“Anyone who tells you that personal relationships don’t matter in foreign affairs doesn’t have a clue.”

Again and again, he emphasized the value of strong ties with the United States.

“The resilience of Americans should never be discounted and the need for Canada to safeguard and nurture its relationship [with the U.S.] in my lifetime and that of my children should be a top foreign policy priority of the prime minister,” Mulroney said.

“If in the business world today, cash is king, in the world of Canada-U.S. relations, access is worth its weight in gold. It’s a privilege Canada should never squander, because of the benefits it can bring us in terms of our national objectives and in the world where Canada must continue to play a constructive role.”

“You are sending us a very important message and I hope people listen, not just here, but in Ottawa,” he said. “Sometimes personal relationships don’t fit into analysis schemes. They’re one card, but the most important card in international relations.”