Growing up in Phoenix, Patrick “Duffy” De Armas hung out at car shows, worked in a hot rod shop and drove a thunderous Chevy truck he lowered, cut up and amped for sound and speed. He loved big, loud, fast machines. But how did a boy from the desert who lived for jet boats and muscle cars become a rising artist changing Seattle’s landscape?

Duffy wasn’t artistic as a kid, but always saw beauty in old American cars. He wrote a high school essay comparing trucks to “rolling sculptures.” As a car shop fabricator, he appreciated 3D design. His favorite cars of all time: the sleek, classic 1955 and 1956 Bel Airs.

In Seattle, he studied fine arts and sculpture at the University of Washington, where the smell of the metal shop reminded him of his Arizona days with hot rods. He began blending his passions for car culture, art and graphic design. 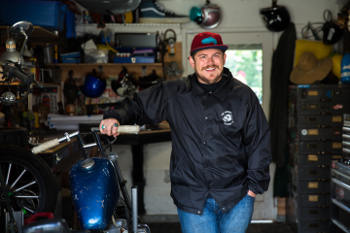 From commercial spaces to galleries to the streets, Duffy is putting a stamp on the city, through both his personal art and the collaborative work of the creative design studio he founded, Electric Coffin. The studio’s vibrant artwork adorns some of the Seattle’s most famous restaurants, bars and offices, with designs and installations that have become iconic and recognizable.

One of three partner artists at the studio, Duffy is currently working on a gallery show for next year, in which the path from hot rod fabricator to accomplished artist is more evident. Microsoft tools have empowered him along the way, helping him create art that engages people with beauty and wit.

“At Electric Coffin, our goal collectively is to inject culture,” says Duffy. “That’s the same in my personal work. It’s really about injecting culture.”

For the show, Duffy is working on four enormous canvas images of drag racers, each a collage with many layers of old posters, magazine images, text and custom-made logos and patterns. The effect is thrilling, punk, almost kinetic. In each image, a narrative emerges from archaeological chaos, evoking the heady spirit of American car culture.

He uses a Microsoft Surface Pro 3 to create and manage his work. Its full-fledged computer power enables it to run Adobe Creative Suite. Its mobility as a tablet also allows him to be ready to draw at a moment’s notice while getting around on his Harley.

“I’m never in one place for very long,” he says. “Having a machine that allows me to continue my work when I’m not in my studio is very important, because you never know when I might see something, be inspired and want to put it into a file and work on it.”

Duffy uses OneNote to save and organize ideas with images, links and files. He uses Word for press releases and narratives, and Excel for production lists for shows and bodies of work.

“I love spreadsheets. I have way too many spreadsheets,” he says in his airy, industrial studio, where he points to a tumultuous piece he’s working on, of a ‘63 Nova gasser popping a wheelie. “Even though that looks chaotic, I try to be a very organized person.”

His collective and personal work has graced galleries, business interiors and even a Seattle beach, but one of his favorite ways to be creative is through outdoor street art. Around Seattle, Duffy has enlivened buildings with graffiti-like paintings of cool, old cars under the moniker Duffyleg, his “South Park”-related nickname.

“They’re meant to be discoverable moments,” he says. “You walk around the corner and all of a sudden there’s [a painting of] a car doing a burnout on the wall, and it makes people smile.”

“If it makes them laugh, cool. If you take a photo of it, even better. If they talk about it and it makes them interested in art, double win. It’s really about the interaction.”