As mice age, cells in tissues such as the liver and skeletal muscle lose control over rogue sequences of DNA called “retrotransposable elements,” according to new research in the journal Aging. The elements, which may undermine health, could proliferate in old mice and were also abundant in cancerous tissue. A low-calorie diet, however, restrained their advance.

PROVIDENCE, R.I. [Brown University] — The genomes of organisms from humans to corn are replete with “parasitic” strands of DNA that, when not suppressed, copy themselves and spread throughout the genome, potentially affecting health. Earlier this year Brown University researchers found that these “retrotransposable elements” (RTE’s) were increasingly able to break free of the genome’s control in cultures of human cells. Now in a new paper in the journal Aging, they show that RTEs were increasingly able to break free and copy themselves in the tissues of mice as the animals aged. In further experiments the biologists showed that this activity was readily apparent in cancerous tumors, but that it also could be reduced by restricting calories.

“As mice age we are seeing deregulation of these elements and they begin to be expressed and increase in copy number in the genome,” said Jill Kreiling, a research assistant professor of biology at Brown and leader of the study published in advance online Dec. 7. “This may be a very important mechanism in leading to genome instability. A lot of the chronic diseases associated with aging, such as cancer, have been associated with genome instability.” 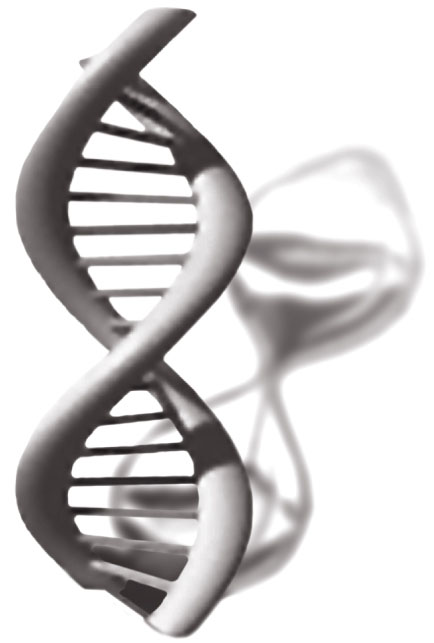 The biology of aging. The ability of parasitic strands of DNA to proliferate in tissues increases with age. Whether this is a cause of health problems or an association remains unclear. Image credit: Sedivy lab/Brown University

Whether the proliferation of RTEs is exclusively a bad thing remains a hot question among scientists, but what they do know is that the genome tries to control RTEs by wrapping them up in a tightly wound configuration called heterochromatin. In their experiments, Kreiling and co-corresponding author John Sedivy, professor of medical science, found that overall, the genomes of several mouse tissues become more heterochromatic with age. But they also found, paradoxically, that some regions where RTEs are concentrated became loosened up instead, particularly after mice reached the 2-year-old mark (equivalent to about the 70-year mark for a person).

An important advance in this paper compared to the prior work in cell cultures, Sedivy said, is that the researchers were able to show the loosening of control over RTEs was associated with the chronological aging of the whole organism and specific tissues. Before in cell culture, the aging they tracked was based on the number of times individual cells were able to divide. That kind of cellular aging is called “replicative senescence” and is believed to be rare in many normal tissues.

“This brings home the magnitude of the problem,” Sedivy said. “We looked in some pretty major tissues. This appears to be a much more widespread phenomenon. The observation that RTEs become activated with chronological aging of mouse tissues also brings this research in close alignment with very similar discoveries using the fruit fly Drosophila in the labs of Brown professors Stephen Helfand and Robert Reenan. The remarkable evolutionary conservation of these fundamental molecular processes indicates that they are likely important aspects of aging.”

In the new research, the team, including lead author Marco DeCecco, looked at cells from the liver and skeletal muscle of mice at ages 5, 24, and 36 months. Comparing gene expression and DNA sequences from the cells, they found elevated expression in both tissues of many RTEs after 24 months. Not only were the RTEs expressed more, but also they succeeded in copying themselves and showing up elsewhere in the genome. For example, an RTE named “MusD” became more than twice as abundant in liver tissue between the ages 24 and 36 months.

The RTEs were considerably less successful in proliferating, however, in mice that were adequately nourished but fed 40 percent fewer calories than mice fed a standard diet. Calorie restriction has been widely shown to mitigate many consequences of aging in different animal models.

On the other hand, the researchers found that several RTEs were much more abundant in mouse tissues affected by naturally occurring cancers, such as lymphoma and hepatocellular carcinoma.

The research does not yet provide evidence that RTEs have a causal role in cancer, Sedivy said. For the time being it’s only an association. But he said that researchers have a path forward to study the health consequences of the RTE proliferation that apparently occurs in aging. Certain drugs can inhibit RTE proliferation, so researchers should be able to see if doing so extends the amount of time an animal is healthy and free of chronic disease in future mouse experiments.

In addition to Kreiling, Sedivy, and DeCecco, other authors are Steven Criscione, Abigail Peterson, and Nicola Neretti.