Pakistan Floods Last Summer Could Have Been Predicted

WASHINGTON — Five days before intense monsoonal deluges unleashed vast floods across Pakistan last July, computer models at a European weather-forecasting center were giving clear indications that the downpours were imminent. Now, a new scientific study that retrospectively examines the raw data from these computer models, has confirmed that, if the information had been processed, forecasters could have predicted extremely accurate rainfall totals 8-10 days beforehand.

The study also finds that the floods themselves could have been predicted if this data, which originated from the European Centre for Medium-Range Weather Forecasting (ECMWF), had been processed and fed into a hydrological model, which takes terrain into account.

The July floods killed thousands of people and tens of thousands of cattle, and left large parts of Pakistan in shambles. The waters displaced, or disrupted the lives of, an estimated 20 million people.

“People don’t understand the powers of modern environmental prediction,” says Peter Webster, a professor of earth and atmospheric science at the Georgia Institute of Technology in Atlanta and lead author of the new study. “This disaster could have been minimized and even the flooding could have been minimized. If we were working with Pakistan, they would have known 8 to 10 days in advance that the floods were coming.” 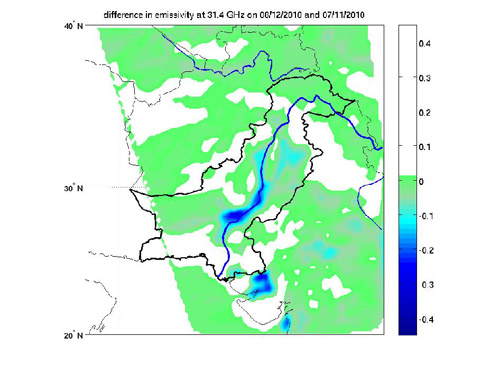 In late July 2010, flooding caused by heavy monsoon rains began in several regions of Pakistan, including the Khyber Pakhtunkhwa, Sindh, Punjab and parts of Baluchistan. According to the Associated Press, the floods have affected about one-fifth of the country. Tens of thousands of villages have been flooded, more than 1,500 people have been killed, and millions have been left homeless. The floodwaters are not expected to fully recede before late August. This image shows how surface emissivity -- that is, how efficiently Earth's surface radiates heat -- changed in the affected region over a 32-day period between July 11 (pre-flood) and August 12 (post-flood). The image was created using data from the Advanced Microwave Sounding Unit instrument, which flies on NASA's Aqua spacecraft as part of the Atmospheric Infrared Sounder (AIRS) instrument suite. Surface emissivity, in this case, in the microwave region of the electromagnetic spectrum, depends strongly on what type of surface is present. For dry land, it is high, close to 1 (land radiates heat very efficiently), while for water, it is quite low, less than 0.5 (water tends to retain heat better than land). The image shows that the emissivity has dropped by up to 0.4 in large areas surrounding the Indus River, indicating that these areas are almost completely under water. Image credit: NASA/JPL

He and his colleagues report their findings in a paper accepted for publication in Geophysical Research Letters, a journal of the American Geophysical Union.

The ECMWF, a London-based organization of 33 participating European countries, “does not give out weather forecasts and weather warnings to the general public or media,” notes ECMWF scientist Anna Ghelli. “ECMWF provides numerical forecasts to its member and co-operating states and they are responsible to prepare forecasts for the public and advise the authorities in their own countries.”

“We noticed that the signal was there five days in advance,” Ghelli recalls. However, the lack of a cooperating agreement between the forecasting center and Pakistan meant that these rainfall warnings didn’t make it to the Pakistani people, nor did Pakistan’s own meteorological agency forecast the flooding.

In their research, the Georgia Tech meteorologists use data from the European center to analyze whether or not the rainfall was above average for Pakistan and if the huge surges in the Indus River would have been predictable if flood forecasters were monitoring the country. They determine that, while the rainfall total for 2010 was slightly above average for the region, the July deluges were exceptionally rare, with rainfall amounts exceeding 10 times the average daily monsoon rainfall. They also find that if a flood forecasting model had been in place, the floods would have been predicted in time to issue warnings.

As a result of processing the raw output from ECMWF models from before the Pakistani deluge, the team achieves greater accuracy than the raw numerical forecasts alone provided. Some weather stations in Pakistan recorded nearly a foot (30 centimeters) of rainfall during the 4-day downpour. The after-the-fact predictions by Webster and his colleagues came in slightly below those amounts at the same locations.

Webster says that processing raw data into weather forecasts and combining them with hydrological models is only half the work. In order to have any effect, the resulting flood forecasts must be successfully disseminated at the village level, and local leaders must also understand them.

In nearby Bangladesh, Webster spent five years creating a flood-forecasting technique and organizing a cooperating agreement with the Georgia Institute of Technology, ECMWF, the Asian Disaster Preparedness Center and the government of Bangladesh. When flooding occurred there several years ago, warnings made possible by the forecasting pact not only averted loss of life, but also saved residents as much as $450 per farm — about the equivalent of an average annual salary in that country.

In a few weeks, Webster will attend an international meeting of developing nations in Bangkok to build support for flood forecasting in Pakistan. He says a forecasting system in Pakistan would cost a few million dollars to set-up, but as little as $100,000 a year once operational. He hopes to convince the World Bank, currently providing $1 billion of flood-recovery financing to Pakistan, to fund the project.

In Bangladesh, Webster recalls, an imam at a local mosque told him about how they discussed the flood forecasts each day in prayer. This is the sort of local solution that Webster envisions for Pakistan as well.