Pair of Black Holes ‘Weigh In’ At 10 Billion Suns, The Most Massive Yet

AUSTIN, Texas — A team of astronomers including Karl Gebhardt and graduate student Jeremy Murphy of The University of Texas at Austin have discovered the most massive black holes to date — two monsters weighing as much as 10 billion suns and threatening to consume anything, even light, within a region five times the size of our solar system.

The research is published in the Dec. 8 issue of the journal Nature in a paper headlined by  graduate student Nicholas McConnell and professor Chung-Pei Ma of the University of California, Berkeley.

The team measured the black holes’ masses by combining observations of the fast-moving stars at their hearts made with the giant Gemini and Keck telescopes in Hawaii with observations of their diffuse outer regions (called the “dark halo”) using the George and Cynthia Mitchell Spectrograph on the 2.7-meter Harlan J. Smith Telescope at The University of Texas at Austin’s McDonald Observatory.

Gebhardt and Murphy have been leading an effort to exploit the powerful Mitchell Spectrograph to study these galaxies. Earlier this year, they announced the previous record-holder black hole mass in the galaxy M87, at 6.7 million times the mass of our sun. 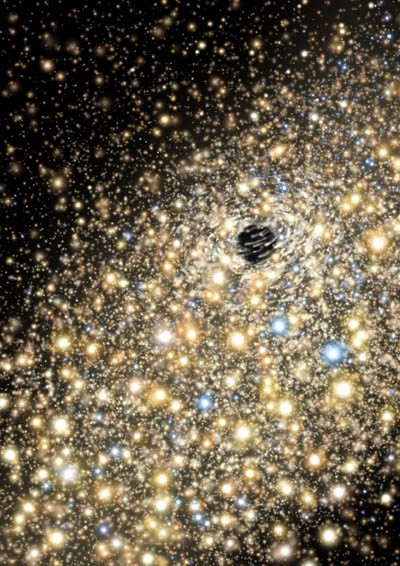 “They just keep getting bigger,” Gebhardt said. “Our measured black hole in M87 is now dwarfed by about a factor of two by both of these. It’s all very exciting, since it tells us something fundamental about how galaxies form.”

“We needed computer simulations that can accommodate such huge changes in scale,” Gebhardt said. “This can only be done on a supercomputer.” The team used the supercomputers at the Texas Advanced Computing Center (TACC) of The University of Texas at Austin. 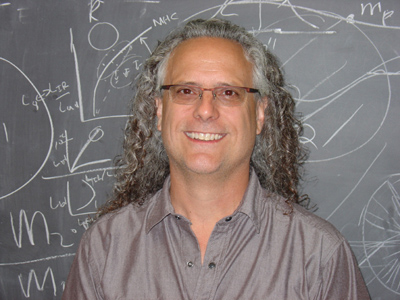 Karl Gebhardt is the Herman and Joan Suit Professor of Astrophysics at The University of Texas at Austin. Image credit: McDonald Observatory/UT-Austin

The black holes in question are at the centers of two galaxies more than 300 million light-years from Earth and may be the dark remnants of some of the very bright galaxies, called quasars, that populated the early universe.

Black holes are dense concentrations of matter that produce such strong gravitational fields that even light cannot escape. Although exploding stars, called supernovae, can leave behind black holes the mass of a single star, supermassive black holes have presumably grown from the merger of other black holes or by capturing huge numbers of stars and massive amounts of gas.

“These black holes may shed light on how black holes and their surrounding galaxies have nurtured each other since the early universe,” McConnell said.

“For comparison, these black holes are 2,500 times as massive as the black hole at the center of the Milky Way galaxy, whose event horizon is one-fifth the orbit of Mercury,” McConnell said.

These 10 billion solar mass black holes have remained hidden until now presumably because they are living in quiet retirement, Ma said. During their active quasar days some 10 billion years ago they cleared out the neighborhood by swallowing vast quantities of gas and dust. The surviving gas became stars that have since orbited peacefully. According to Ma, these monster black holes and their equally monster galaxies containing probably a trillion stars settled into obscurity at the center of galaxy clusters.

“Multiple mergers are one way to build up these behemoths,” she said.

“For an astronomer, finding these insatiable black holes is like finally encountering people 9 feet tall, whose great height had only been inferred from fossilized bones. How did they grow so large?” Ma said. “This rare find will help us understand whether these black holes had very tall parents or ate a lot of spinach.”

The research was supported by the National Science Foundation, the National Aeronautics and Space Administration and UC Berkeley’s Miller Institute for Basic Research in Science.