*Report evaluates amount of carbon absorbed by wetlands, grasslands and forests in the Great Plains region*

WASHINGTON, D.C. — The Department of the Interior today released the first in a series of regional studies measuring the amount of carbon stored in U.S. ecosystems. Published by Interior’s U.S. Geological Survey (USGS), the study examines the current and projected future carbon storage in the Great Plains region, as part of a nation-wide assessment.

“This is truly groundbreaking research that, for the first time, takes a landscape-level look at how our lands naturally store carbon and explores how we can encourage this capability in ways that enhance our stewardship of natural resources,” said Deputy Secretary of the Interior David J. Hayes. “Our landscapes are helping us to absorb carbon emissions that would otherwise contribute to atmospheric warming.”

This is the first regional report applying a comprehensive methodology designed by the USGS in 2010 to assess how much carbon is stored in various ecosystems, such as wetlands, forests and rangelands. The study covers an area of the United States that includes parts of fourteen states from eastern Montana to southern Texas and eastern Iowa.

Following the Great Plains study, the USGS is expected to release studies on the western, eastern, Alaskan and Hawaiian regions. The full national assessment is expected to be completed around 2013. 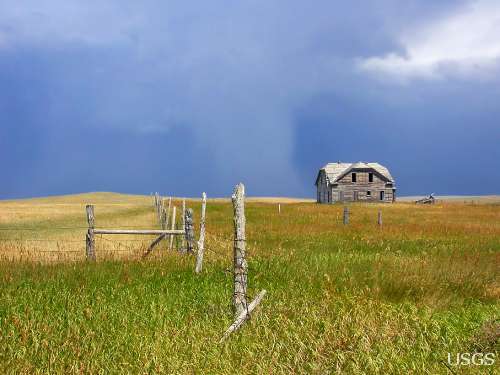 Agricultural fields and an abandoned farmstead in eastern Montana in the Great Plains region. The Great Plains region of the United States has experienced significant land-use change since European settlement, with vast swaths of grasslands converted to agricultural lands. Access to water, technological changes, a growing biofuels industry, fluctuating demands for agricultural products, and government policies have resulted in periodic historical shifts in land use in the region and may drive major land-use changes in the next several decades. Land use and land management in the region have significant implications for carbon storage and greenhouse-gas fluxes. Image credit: Terry Sohl , U.S. Geological Survey

A key finding in the Great Plains study is that the region is currently an overall “carbon sink,” meaning it takes up more carbon than it emits. In addition, the amount of carbon sequestered offsets most of the emissions of nitrous oxide and methane from this region.

On a national scale, the amount of carbon that is currently stored per year in ecosystems within the Great Plains is about 21 percent of emissions from personal vehicles and 3.6 percent of total fossil fuel emissions nationwide. The values for vehicle and total fossil fuel emissions are not part of the USGS study but were calculated using the 2009 EPA national greenhouse gas inventory report.

Using the uniform methodology developed by USGS also allows for comparisons between regions and ecosystems. For example, the regional study shows that the southern part of the Great Plains has a substantial amount of woody vegetation, which has a strong potential to store additional carbon. Agricultural lands in the eastern part of the Great Plains similarly have a strong potential to store carbon; however, these areas also are associated with high greenhouse gas emissions.

“For the first time, we will have a comprehensive view of how carbon is cycling through our Nation’s ecosystems: sources, sinks, and relative residence times in the various biological components,” explained USGS Director Marcia McNutt. “This study will not only result in better land-use decisions but should also advance our fundamental understanding of one of the most important chemical cycles on the planet.”

Congress called for the USGS carbon sequestration research in 2007 legislation sponsored by then-Senator Ken Salazar. At the 2009 United Nations Framework Convention on Climate Change (COP-15), Salazar – as Secretary of the Interior – presented the initiative, noting the importance of biological carbon sequestration.

“This report will give tools to the policymakers, land managers and the public to make sound decisions, such as whether to restore wetlands, harvest trees, develop agricultural lands, or consider no-till farming practices,” said Hayes. For example, a community might need to decide whether to convert grasslands and forests to croplands or urban areas to meet the demands of a growing population. Such decisions have varying consequences related to carbon sequestration and greenhouse gas emissions.

Changes in carbon storage are driven by both short – and long-term changes to the landscape. In the Great Plains, carbon storage is expected to increase based on near-future land use and management practices such as decreased timber harvesting and changes to crop management, including expanded fertilizer applications and no-till farming. The rate of increase is projected to slow somewhat over time due to climate change and land-use transitions such as grasslands or forests conversion to croplands or urban areas.

Following the Great Plains study, the USGS is expected to release studies on the western, eastern, Alaskan and Hawaiian regions. The full national assessment is expected to be completed around 2013.

The report “Baseline and Projected Future Carbon Storage and Greenhouse-Gas Fluxes in the Great Plains Region of the United States” can be found online in the USGS publications warehouse at https://pubs.usgs.gov/pp/1787/.