Treating ovarian cancer with the drug bevacizumab (“Avastin”) delays the disease and may also improve survival, according to an international clinical trial co-led by Drs. Amit Oza of the University of Toronto and Princess Margaret Hospital (PMH) and Timothy Perren of St James’s Institute of Oncology, Leeds, U.K.

The findings, published on Dec. 28 in the New England Journal of Medicine, report that the drug halted the cancer’s return for two months overall. However, for women with the highest risk disease, the delay was five to six months and in this group, the findings also indicate a strong trend to improved overall survival, which is being analysed until 2013.

“This is the first new drug in ovarian cancer in 15 years to improve outcome and I believe it should be considered as a potential new standard of care,” said Oza, a professor in the Department of Medicine and a medical oncologist who leads the Cancer Clinical Research Unit at PMH. He is also co-director of the hospital’s Bras Family Drug Development Program. 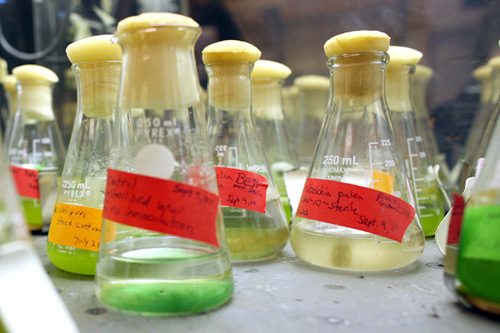 Although there's still a long way to go before discovering a cure for ovarian cancer, research now shows that Avastin delays the disease. (Photo by Caz Zyvatkauskas)

The seven-year study began in 2004 and enrolled 1,528 women with ovarian cancer at 263 centres, including 20 in Canada. Avastin was added to chemotherapy treatment and given intravenously every three weeks for 12 months.

The drug blocks growth factors that promote new blood vessels formation in tumours, thereby “starving” the cancer. It is not a cure, explained Oza, but has a proven track record in delaying disease progression in other types of cancer including colorectal, lung, breast, kidney and brain.

“We now know that using Avastin in ovarian cancer for even this short time improves outcomes,” said Oza. “The next step is to determine if giving it for a longer period would be of even greater benefit.”

Similar findings from a U.S. study are also reported in this issue of the journal. Oza said the major difference between the two studies is that the women in the American study were given twice as much Avastin.

“So the question now is would half the dose for double the duration improve outcomes even more? This is an area to investigate further.”

The Canadian Cancer Society estimates 2,600 new cases of ovarian cancer will be diagnosed this year and 1,750 women will die of the disease.