Out of This World

Imagine a computer chip that can assemble itself.

According to Eric M. Furst, professor of chemical and biomolecular engineering at the University of Delaware, engineers and scientists are closer to making this and other scalable forms of nanotechnology a reality as a result of new milestones in using nanoparticles as building blocks in functional materials.

Furst and his postdoctoral researchers, James Swan and Paula Vasquez, along with colleagues at NASA, the European Space Agency, Zin Technologies and Lehigh University, reported the finding Sept. 17 in an article in the Proceedings of the National Academies of Science (PNAS) online edition.

Entitled “Multi-scale kinetics of a field-directed colloidal phase transition,” the article details how the research team’s exploration of colloids, microscopic particles that are mere hundredths the diameter of a human hair, to better understand how nano-“building blocks” can be directed to “self-assemble” into specific structures.

The research team studied paramagnetic colloids while periodically applying an external magnetic field at different intervals. With just the right frequency and field strength, the team was able to watch the particles transition from a random, solid like material into highly organized crystalline structures or lattices.

According to Furst, a professor in UD’s Department of Chemical and Biomolecular Engineering, no one before has ever witnessed this guided “phase separation” of particles.

“This development is exciting because it provides insight into how researchers can build organized structures, crystals of particles, using directing fields and it may prompt new discoveries into how we can get materials to organize themselves,” Furst said. 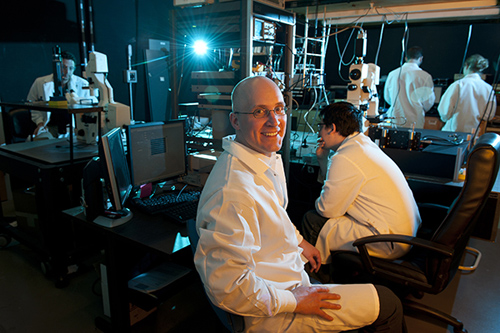 Because gravity plays a role in how the particles assemble or disassemble, the research team studied the suspensions aboard the International Space Station (ISS) through collaborative efforts with NASA scientists and astronauts. One interesting observation, Furst reported, was how the structure formed by the particles slowly coarsened, then rapidly grew and separated – similar to the way oil and water separate when combined – before realigning into a crystalline structure.

Already, Furst’s lab has created novel nanomaterials for use in optical communications materials and thermal barrier coatings. This new detail, along with other recorded data about the process, will now enable scientists to discover other paths to manipulate and create new nanomaterials from nanoparticle building blocks.

“Now, when we have a particle that responds to an electric field, we can use these principles to guide that assembly into structures with useful properties, such as in photonics,” Furst added.

The work could potentially prove important in manufacturing, where the ability to pre-program and direct the self-assembly of functional materials is highly desired.

“This is the first time we’ve presented the relationship between an initially disordered structure and a highly organized one and at least one of the paths between the two. We’re excited because we believe the concept of directed self-assembly will enable a scalable form of nanotechnology,” he said. 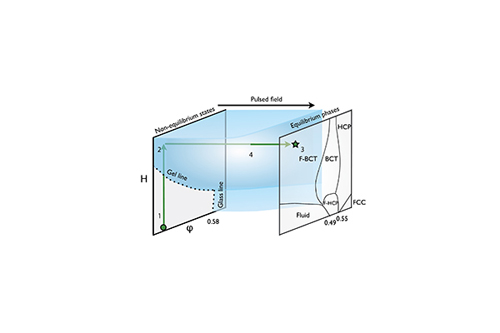 This image shows the work by UD's Eric M. Furst, who reports new findings of how tiny particle building blocks can be directed to self-assemble into specific structures. Photo by Kathy F. Atkinson