Too Much Information? It Depends …

In a new study, psychologists at Brown University and the University of Colorado found that while some people require a detailed explanation of how a product works before they’ll be willing to pay more, others became less willing to pay when confronted with that additional detail. A simple, standard test predicted the desire for detail — who wants more, who wants less.

PROVIDENCE, R.I. [Brown University] — A study published online in the Journal of Consumer Research finds that people can differ widely on the level of detail makes them feel they understand something. In experiments, the very same explanations that some subjects required before they would pay top dollar seemed to drive down what others were willing to pay. The natural trick for a marketer would be to figure out which customers are which. The study does that, too.

“The fact is that people differ,” said Steven Sloman, professor of cognitive, linguistic, and psychological sciences at Brown University and an author on the paper. “Your advertising, your marketing, and your understanding of people has to be guided by an appreciation of who you are talking to.”

The particular difference that lead author Philip Fernbach, assistant professor of marketing at the University of Colorado–Boulder’s Leeds School of Business, and Sloman focused on in a series of experiments was the inclination of people to consider details of how products work. Thoughtful “explanation fiends” became more motivated the more the product was explained. More intuitive “explanation foes” felt confident in their understanding when the explanation was superficial but deeper detail eroded that understanding and ultimately their willingness to pay for the product.

In an essential respect these different groups of consumers are actually the same, said Fernbach. Both kinds of consumers want to feel like they understand how a product works before it will gain their trust.

“The more they feel like they understand, the more they will be willing to pay for the product,” he said. But the consumers differ sharply on the level of detail that makes them feel informed. 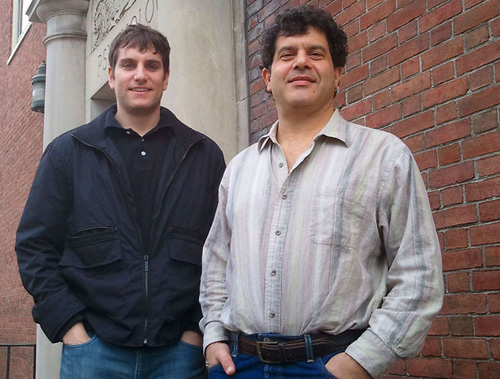 Who wants to know? Some customers buy when they know more about a product; others are confused by additional detail and are less likely to buy. Can marketing people figure out who wants to know what? Research by Philip Fernbach, left, and Steven Sloman suggests that they can. Image credit: David Orenstein/Brown University

Each of the study’s four experiments measured the subjects’ tendency to deliberate before responding to a question with a simple, standard quiz called the Cognitive Reflection Test (CRT). The test asks three questions that have intuitive, but wrong, answers. The correct answer requires a little more thought. Fernbach and Sloman thought it might predict each subject’s inclination to consider detail. Sure enough, in each experiment the CRT accurately predicted whether the subject would be an explanation fiend or foe.

The first experiment assessed how 127 people who were recruited online rated their understanding of four products as they read four different levels of detail about how the products worked, presented in random order. Then they took the CRT. A low score indicated an intuition-oriented person while a high score indicates someone who thinks deeply.

The result? CRT low-scorers rated their understanding as higher when presented with less detail. High scorers on the CRT said they understood best when they read the greatest level of detail.

“The effect of mechanistic detail on judged understanding was moderated by cognitive reflection,” wrote the authors of the study, which began when Fernbach was a postdoctoral researcher in Sloman’s group at Brown. In addition to Fernbach and Sloman, the study’s other authors are Brown undergraduates Robert St. Louis and Julia Shube.

The second experiment assessed what level of detail would motivate 223 new online volunteers to pay for a premium product with a special feature, compared to a less expensive generic competitor without that feature. The level of explanatory detail for the premium feature varied.

The third experiment confirmed that only details explaining how a product works are pertinent to the dichotomy between explanation fiends (CRT high scorers) and explanation foes (CRT low scorers).

For marketers of consumer products, including funders of the research at Unilever, the big question is whether any of this psychology matters to what people will pay. The last experiment found that it can make a big difference and helped explain why.

The researchers again presented subjects with products and explanations of how they worked, but this time they broke them into two groups. Some were shown only a shallow explanation of each of four products and then rated their understanding. Then they indicated what they’d be willing to pay.

The researchers asked the other group to do extra work. After showing the volunteers explanations of two products, they asked them to generate their own explanation, to re-evaluate their level of understanding, and then to say how much they’d be willing to pay. By asking those subjects to explicitly explain the products, the authors forced them to confront whether they really understood or only felt they did.

The idea that people often feel they understand things better than they really do is called “the illusion of explanatory depth.” Fernbach and Sloman’s hypothesis was that explanation foes are especially prone to this illusion, even after encountering only a superficial explanation. Forcing them to confront their lack of understanding would dispel it, ultimately undermining what they’d be willing to pay.

What did change was how much fiends and foes of explanation were willing to pay before and after they were asked to explain how the products worked. Averaged over the two products, foes dropped their prices from $8 to less than $6 after their illusions were shattered. Explanation fiends, however, raised what they were willing to pay to about $8.50 from less than $6 after being asked to explain the products.

Sloman said he was struck by how strongly explanation foes harbor illusions about their understanding.

“We were actually shocked by how powerfully the data came out, that the effect really is almost entirely carried by the low CRT scorers,” he said. “The people who do think before they respond don’t seem to suffer from this illusion.”

Fernbach said the lesson from the study for marketers — how to vary the level of detail for different customers — is particularly important for companies seeking to introduce novel products.

Getting it right could make a real difference in what customers are willing to pay.