It looks like a plastic candy wrapper that’s been charred on both sides, but it may hold the solution to commercially viable fuel cells.

About the thickness of a human hair, it is actually a thin polymer membrane sandwiched between two catalysts. The work is that of Yushan Yan, Distinguished Professor of Engineering at the University of Delaware, who is known for developing new catalysts and membranes to reduce the cost and improve the durability of fuel cells.

The membrane, he says, is a game changing development that shows great promise to revolutionize the way engineers and scientists think about traditional chemical crosslinking methods used to create strong fuel cell membranes.

In order to be practical, however, polymer membranes must be strong and resistant to water swelling. To achieve this, polymer chains are traditionally chemically crosslinked. The catch is that chemical crosslinking hampers the membranes’ other functionalities.

By leveraging the van der Waals interaction, a group of weak molecular interactions, Yan’s research team has demonstrated that it is possible to create polymer bonds that are as effective as those that are chemically crosslinked, without the brittleness crosslinked polymers typically display. 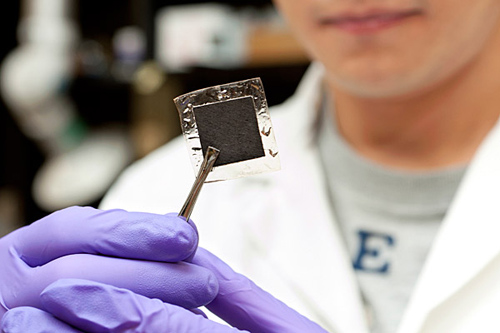 The work was recently featured on the cover of the journal ChemSUSChem. Co-authors on the paper are Shuang Gu, a postdoctoral researcher in Yan’s UD laboratory, and Jason Skovard, Yan’s former undergraduate student researcher.

Yan explains that traditionally when engineers want to increase conductivity in a polymer, they increase the density of the ionic groups present in the polymer. However, with the high density comes membrane swelling, which can destroy the mechanical integrity of the polymer and reduce or eliminate its usefulness. By exploiting the fact that positive and negatively charged ions physically attract one another, Yan’s group was able to increase the strength of the polymer bond without any chemical crosslinking.

“We realized that we can play with the van der Waals interaction between the polymer chains, because a positive charge complemented by a negative charge creates what’s called a ‘dipole moment’ that polarizes the molecules and causes them to attract; and the larger the dipole moment, the stronger the interaction,” he says.

The team then designed the polymer chain to have high electron density and thus be more susceptible to the van der Waal interaction, thereby increasing the attractive force without creating any real bond.

“It is a bond that is created by the presence and strength of these positive and negative charges,” explains Yan.

Using a social analogy, Yan describes it this way: “You can force people to work together by tying them up, or you can find those that are naturally drawn to each other. The Van der Waals force, or physical crosslinking as we call it, relies on the natural attraction between polymer molecules.” 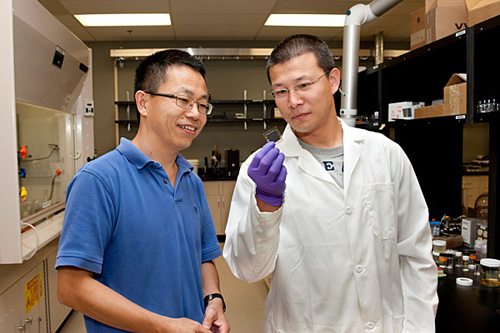 Yushan Yan (right) with postdoctoral researcher Shuang Gu, who was a co-author of the paper featured in ChemSusChem. Photo by Kathy F. Atkinson

The discovery that the van der Waal force could be leveraged in this way was actually a happy accident that occurred while trying out new polymers for his work.

Importantly, with this proven theory, Yan sees the discovery as one more option for making better membranes and for the commercialization of future fuel cells. Specifically, he says the work may dramatically help reduce fuel cell costs, allowing the technology to become competitive to conventional technology.

“If we stay with platinum, there is real concern that the technology may not be commercially viable because of cost,” he says.

Another advantage of physically cross-linked bonds, he says, is that they are easily reversed, allowing the polymers to be returned to their original form and re-manipulated over and over, flexibility not available with chemical cross-linking.

The next step is to engineer positive fuel cell characteristics using different polymer chains, potentially opening the door for a new direction for Yan and other fuel cell engineers. His eventual target is to replicate the conventional lifespan of a vehicle’s internal combustion engine, which is currently around 5,000 hours of driving time, using HEMs fuel cells.

“To me, the biggest prize for this technology is transportation,” said Yan.

Yushan Yan is a world renowned researcher known for his work using nanomaterials to solve problems in energy engineering, environmental sustainability and electronics. His research group was the first to demonstrate the use of zeolite thin films for semiconductors and aerospace applications and new materials for fuel cells, energy storage and solar hydrogen generation. Yan joined the UD’s College of Engineering in 2011 as Distinguished Professor of Engineering, with dual responsibilities in the Department of Chemical and Biomolecular Engineering and the UD Energy Institute (UDEI).