Sunday marks the one-year anniversary of the great Tohoku earthquake and tsunami that devastated Japan, killing more than 16,000 people and causing billions of dollars in damage.

University of Washington scientists say the event has some important lessons for the Pacific Northwest – most notably, not that a similar event can happen here but that it WILL happen here, and that this region is still much less prepared than Japan was a year ago.

When the quake struck, Jody Bourgeois, a UW professor of Earth and space sciences and an expert on tsunamis, was working with colleagues at Hokkaido University in Sapporo, on Japan’s northern island. She was perhaps 300 miles from where the quake started, yet the shaking was so intense that she became physically ill from the motion. 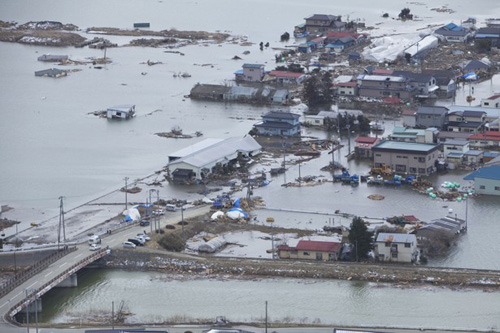 An aerial view of Minato, Japan, one week after a magnitude 9 earthquake and subsequent tsunami devastated the area in March 2011. Image credit: U.S. Marine Corp

It turned out to be very big, a magnitude 9, one of the five most powerful earthquakes ever recorded. Scientists believe a giant quake of the same magnitude struck the Cascadia subduction zone off the coast of Oregon, Washington, British Columbia and northern California in January 1700, though there were no instruments to record it.

But as big as the Japan quake was, most people still survived, Bourgeois said, “and for reasons of preparedness.”

“Even the most prepared country was not up to this major tsunami,” she said. “The Pacific Northwest coast has made a lot of progress (in the last 20 years), but there’s a lot more that can be done.”

She noted that various engineering solutions have been undertaken to protect the Japanese from tsunamis, including large walls along the shoreline.

In some places tsunami waves reached higher than 100 feet, and in some they traveled inland as far as 6 miles. Engineering mitigation solutions helped in some areas, and in others they made matters worse. 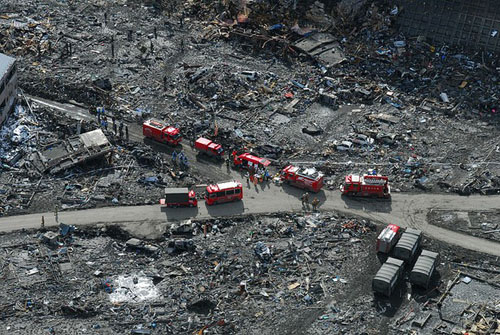 Bourgeois related the story of a group of Japanese students in their early teens who had been drilled on what to do in a major earthquake and an ensuing tsunami. When the shaking hit, they gathered up elementary school students and began making their way to higher ground, collecting stragglers as they went. Then they realized the spot they had picked, the one that was part of their drills, was not high enough and they moved twice more to reach safety.

In the Northwest, she noted, there are areas of particular vulnerability – places like Ocean Shores and the Long Beach Peninsula – where there is little chance of getting to high ground in time to escape an onrushing tsunami.

She endorses suggestions from scientists and emergency managers that those communities need to invest in evacuation towers where people can flee following a coastal earthquake, or else accept the fact that many people will die. She also advocates regular drills for tsunami evacuation, something that now occurs in only a few places.

“No one likes to think about disaster all the time, but it’s not hard to have drills,” Bourgeois said.

Such drills shouldn’t be restricted to the coast. The Puget Sound region also can be vulnerable to tsunamis generated from large earthquakes on the Seattle fault or a number of other faults that criss-cross the region. In her research, Bourgeois has explored sedimentary evidence for tsunamis in various areas around the Sound, including several sloughs in the Everett area.

Yet she notes that tsunami evacuation signs, fairly common along the Pacific Coast, are seldom if ever seen in the Puget Sound area. Signs alerting people to the danger are good, she said, but education is even more important.

“I don’t even think people in the Seattle area are aware a tsunami can happen here. If you are on the beach at Alki (in West Seattle) and experience an earthquake, you should be aware that when the shaking stops it isn’t necessarily over,” she said.

Another lesson from Japan is to be prepared for the possibility that nearly an entire fault could break at one time, a dangerous prospect, said John Vidale, an Earth and space sciences professor and director of the Pacific Northwest Seismic Network. Because emergency managers in Japan did not understand that possibility, they were prepared only for a magnitude 8 earthquake from the fault that ruptured. The resulting quake released 32 times more energy.

“GPS is the better tool but it was not in routine use when the early warning system was designed and it hadn’t been incorporated at the time of the 2011 earthquake,” Vidale said.

In addition, he said, the danger from the shallow part of the subduction zone was greatly underestimated. Scientists thought that area didn’t bear any strain, but during the quake the shallowest part of the fault moved as much as 260 feet, displacing a huge amount of sea water.

“Our confidence in making specific predictions about the details of impending earthquakes has been shaken,” Vidale said.

He also noted that the earthquake was uncommon, possibly the most powerful to strike Japan in 1,000 years. Preparing for such an event is extremely costly, Vidale said, and the United States “is not nearly so prepared, and rather is gambling to save money.”