Ocean’s most oxygen-deprived zones to shrink under climate change

As the complex story of climate change unfolds, many of the endings are grim. But there are exceptions. Predictions that the lowest-oxygen environments in the ocean would get worse may not come to pass. Instead, University of Washington research shows climate change, as it weakens the trade winds, could shrink the size of these extreme low-oxygen waters.

“The tropics should actually get better oxygenated as the climate warms up,” said Curtis Deutsch, a UW associate professor of oceanography. He is lead author of the study published Aug. 8 in Science. 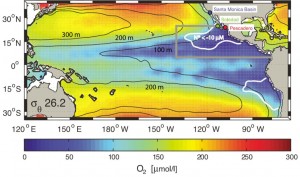 The low-oxygen zone is below the surface off the coasts of Mexico and Peru. Sediment cores were collected at the northern low-oxygen zone, near Santa Monica and Baja California. Image credit: C. Deutsch / UW (Click image to enlarge)

Warmer water contains less gas, so climate change is expected to reduce oxygen levels. Observations show this is already taking place in many places around the world. Declines during the past 20 years in the tropical low-oxygen zones, the lowest-oxygen waters on the planet, had led to a 2008 study proposing that these zones would also get worse over time.

Tropical regions are usually associated with an abundance of life, but they have some of the most inhospitable places for ocean dwellers. The oxygen minimum zones off Mexico and Peru have oxygen levels already too low to support most animals (so, unlike in other low-oxygen zones, here there’s no risk of killing fish).

But when those levels drop even further, a particular group of bacteria, which can use nitrogen instead of oxygen as a source of energy, thrive. Nitrogen is an essential and very scarce nutrient for marine plants. When oxygen levels get low enough for that particular group of bacteria to take over, significant amounts of the ocean’s fertilizer get deep-sixed to the bottom of the tropical ocean.

The new paper shows that water flowing into the tropics is indeed likely to get lower in oxygen, decreasing the initial oxygen supply. But demand will also shift under climate change. Specifically, as the trade winds weaken, the whole sequence of events that feeds this bacterial food chain will slow down, and the low-oxygen zone will shrink.

“If we want to understand how biological and chemical aspects of the ocean will change in the future, we really have to pay a lot of attention to what happens with the winds,” Deutsch said. “The winds can lead to conclusions that are exactly the opposite of what you’d expect.” 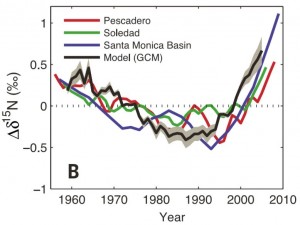 Sediment records show nitrogen from bacteria that thrive without oxygen has been decreasing for most of the time that carbon dioxide has been increasing. The past 20 years shows a different trend, possibly related to changes in Pacific Ocean winds. Image credit: C. Deutsch / UW (Click image to enlarge)

Trade winds from the west cause deep water to percolate up along western coasts, bringing nutrients up from the deep sea. These nutrients feed marine plants, which feed marine animals, which decompose to feed bacteria that use up the remaining oxygen. As trade winds weaken, less nutrient-rich water percolates up from the deep. Fewer plants grow at the surface. Finally, fewer oxygen-gobbling bacteria can survive.

Deutsch is a climate modeler who studies tropical ocean circulation. He learned of sediment cores, collected off Mexico by co-authors William Berelson at the University of Southern California and Alexander van Geen at Columbia University, that showed a puzzling longer-term trend. The authors worked together to interpret the samples. Results show that for most of the time since 1850 the population of these nitrogen-eating bacteria has been going down, coincident with warming oceans and weakening trade winds. This implies that the local oxygen levels, for which few direct measurements exist, have been rising.

“I find it an interesting question for understanding the way the ocean functions on climatic or geologic timescales,” Deutsch said.

Most climate models predict that trade winds will continue to weaken in the future, shrinking the oxygen-minimum zones in the Pacific Ocean off the coasts of Mexico, Chile and Peru, and in the Indian Ocean off western Australia.

Decreasing oxygen in the wider ocean is still a major concern, Deutsch said, as are overfishing, ocean acidification and warming water temperatures.

“This study shows that what happens to the winds, which is sometimes overlooked, is really important for predicting how the oceans will respond to climate change,” Deutsch said.