Fluctuations in climate can drastically affect the habitability of marine ecosystems, according to a new study by UCLA scientists that examined the expansion and contraction of low-oxygen zones in the ocean.

The UCLA research team, led by assistant professor of atmospheric and oceanic sciences Curtis Deutsch, used a specialized computer simulation to demonstrate for the first time that the size of low-oxygen zones created by respiring bacteria is extremely sensitive to changes in depth caused by oscillations in climate. These oxygen-depleted regions, which expand or contract depending on their depth, pose a distinct threat to marine life.

“The growth of low-oxygen regions is cause for concern because of the detrimental effects on marine populations — entire ecosystems can die off when marine life cannot escape the low-oxygen water,” said Deutsch. “There are widespread areas of the ocean where marine life has had to flee or develop very peculiar adaptations to survive in low-oxygen conditions.” 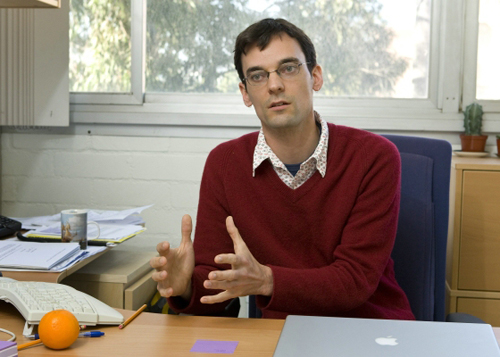 The study, which was published June 9 in the online edition the journal Science and will be available in an upcoming print edition, also showed that in addition to consuming oxygen, marine bacteria are causing the depletion of nitrogen, an essential nutrient necessary for the survival of most types of algae.

“We found there is a mechanism that connects climate and its effect on oxygen to the removal of nitrogen from the ocean,” Deutsch said. “Our climate acts to change the total amount of nutrients in the ocean over the timescale of decades.”

Low-oxygen zones are created by bacteria living in the deeper layers of the ocean that consume oxygen by feeding on dead algae that settle from the surface. Just as mountain climbers might feel adverse effects at high altitudes from a lack of air, marine animals that require oxygen to breathe find it difficult or impossible to live in these oxygen-depleted environments, Deutsch said.

Sea surface temperatures vary over the course of decades through a climate pattern called the Pacific Decadal Oscillation, during which small changes in depth occur for existing low-oxygen regions, Deutsch said. Low-oxygen regions that rise to warmer, shallower waters expand as bacteria become more active; regions that sink to colder, deeper waters shrink as the bacteria become more sluggish, as if placed in a refrigerator.

Molecular oxygen from the atmosphere dissolves in sea water at the surface and is transported to deeper levels by ocean circulation currents, where it is consumed by bacteria, Deutsch said.

“The oxygen consumed by bacteria within the deeper layers of the ocean is replaced by water circulating through the ocean,” he said. “The water is constantly stirring itself up, allowing the deeper parts to occasionally take a breath from the atmosphere.”

A lack of oxygen is not the only thing fish and other marine life must contend with, according to Deutsch. When oxygen is very low, the bacteria will begin to consume nitrogen, one of the most important nutrients that sustain marine life.

“Almost all algae, the very base of the food chain, use nitrogen to stay alive,” Deutsch said. “As these low-oxygen regions expand and contract, the amount of nutrients available to keep the algae alive at the surface of the ocean goes up and down.”

Understanding the causes of oxygen and nitrogen depletion in the ocean is important for determining the effect on fisheries and fish populations, he said.

Deutsch and his team used a computer model of ocean circulation and biological processes that produce or consume oxygen to predict how the ocean’s oxygen distribution has changed over the past half century. The researchers tested their predictions using observations made over the last several decades, specifically targeting areas where oxygen concentration is already low, because marine life in these areas will feel the changes most quickly.

How would rising global temperatures affect these low-oxygen environments?

As temperature increases, less oxygen leaves the atmosphere to dissolve in the ocean, Deutsch explained. Additionally, the shallower levels of the ocean heat up and become more buoyant, slowing the oxygen circulation to lower layers.

“In the case of a global temperature increase, we expect that low-oxygen regions will grow in size, similar to what happened at the end of the last ice age 30,000 years ago,” Deutsch said. “Since these regions change greatly in size from decade to decade due to the Pacific Decadal Oscillation, more data is required before we can recognize an overall trend.

“Global warming will almost certainly influence the amount of oxygen in the ocean, but we expect it to be a slow effect that takes place over long periods of time,” he added. “There are huge changes in the volume of this low-oxygen water, but the changes oscillate in a natural cycle instead of a persistent growth as many expected. Oxygen comes and goes in the ocean in a way that is not attributable to the long-term warming of the planet. Instead, it is part of the natural rhythm of the ocean.”

The study was funded by the National Science Foundation, as well as by the Gordon and Betty Moore Foundation.

UCLA is California’s largest university, with an enrollment of nearly 38,000 undergraduate and graduate students. The UCLA College of Letters and Science and the university’s 11 professional schools feature renowned faculty and offer more than 323 degree programs and majors. UCLA is a national and international leader in the breadth and quality of its academic, research, health care, cultural, continuing education and athletic programs. Six alumni and five faculty have been awarded the Nobel Prize.