Whereas ‘pants’-wearing Northerners enjoy a ‘bap’, ‘bun’ or ‘barm’ for their ’tea’, Southerners in ‘trousers’ are more likely to tuck into a ‘roll’ for their ‘dinner’, find language researchers at The University of Manchester.

A survey of 1400 English speakers by linguist Dr Laurel MacKenzie and her students reveals a North-South divide on how we describe everyday items such as bread, trousers, footwear and evening meals.

They also show how Northerners and Southerners can pronounce the same words in completely different ways.

In an example, ‘one’ and ‘gone’ typically rhyme when spoken by Northerners, but not Southerners. In addition, ‘give it me’ is more acceptable in the North whereas they’re more likely to use ‘give it to me’ in the South.

Also according to the survey, Brummies can’t make up their mind if they’re Northern or Southern: like their Northern neighbours, they rhyme ‘one’ and ‘gone’, but they mirror the South in calling the evening meal ‘dinner’ and fail to rhyme the words ‘foot’ and ‘strut’.

The way we describe soft round bread is also subdivided into smaller regions: ‘bun’ is common in Tyneside, ‘barm’ and ‘muffin’ in the North West, ‘teacake’ North of Manchester and ‘cob’ in the Midlands. Southerners stick to the less exotic ‘rolls’.

And only Scousers rhyme the words ‘fur’ and ‘bear’ along with the nearby residents of Merseyside, St. Helens and Wigan. 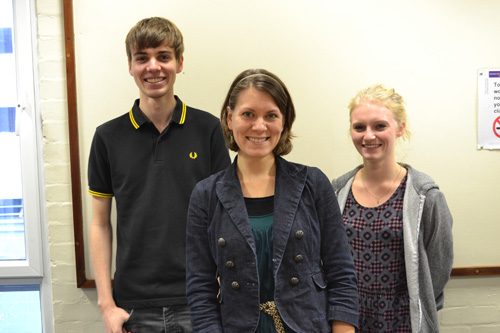 People between the ages of 10 and 87, spanning a geographical region from Moray in Scotland to Cornwall responded to the survey by the students, now in their third year.

One of the students, George Bailey, compiled the results into a series of interactive Google maps that show the regional patterns, hosted on the University’s Multilingual Manchester website https://mlm.humanities.manchester.ac.uk/maps.html

Dr MacKenzie said: “This research shows a clear North-South divide in many of the words we choose to use when describing everyday items, and the way we pronounce them.

“Variation is pervasive in language, and often correlates with social factors, like age, socioeconomic status and a person’s place of origin.

“But it’s not completely clear why different words are used to describe the same thing in different parts of the country. There are sometimes anecdotal explanations — for instance, daps, the South West’s word for sports shoes, is said to be an abbreviation of Dunlop Athletic Plimsolls — but they’re often hard to verify.”

She added: “The source of regional differences in pronunciation is often more clearly understood. Changes in pronunciation may start in a particular area and spread outward, but be stopped or slowed down by political or geographical barriers.

“The Northern way of rhyming the words ‘put’ and ‘cut’, for example, is faithful to how these words were pronounced centuries ago.

“Speakers in the South of England moved away from this pronunciation in the 1500s, but their way of saying these words didn’t make it to the North.

“However, we’ve compared our maps to those put together a few decades ago, and it looks like the Southern pronunciation is slowly creeping northward.”

George Bailey, from Whitefield in Greater Manchester said: “I suppose the posh image of Southerners is a bit of a stereotype. But, as a Mancunian, there is a real sense of Northern identity here. The North-South divide is talked about so much, but it’s nice that we can now clearly see evidence that the language is different too.

“I know I’d get some funny looks from my family and friends if I started using ‘dinner’ for the evening meal. I’d feel like I was betraying my Northern roots!”

Fellow student who took part in the survey, Southerner Jessica Fox, from Southampton, has lived in Manchester for two-and-a-half years.

She said: “It’s certainly different living in the North and as it was my first time here it took some getting used to. For example, I never say ‘tea’ for ‘dinner’, because to me it sounds as if I’m offering somebody a hot drink!

“Sometimes it’s very awkward and the locals see you as posh. My boyfriend’s parents are very Mancunian, so I’m conscious of how I sound to them.

“Having said that, I’ve been here for a while now and seeing myself staying on after I graduate – so I have taken on the lingo a bit by now.”