The landslide – which moved at an average of almost 70 mph and reached estimated speeds of at least 100 mph – left a deposit so large it “would cover New York’s Central Park with about 20 meters (66 feet) of debris,” the researchers report in the January 2014 cover study in the Geological Society of America magazine GSA Today. 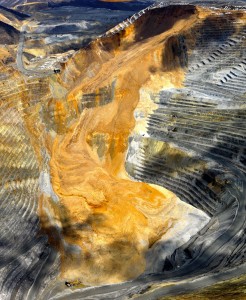 The April 10, 2013, landslide at Rio Tinto-Kennecott Utah Copper’s Bingham Canyon mine contains enough debris to bury New York City’s Central Park 66 feet deep, according to a new University of Utah study. The slide happened in the form of two rock avalanches 95 minutes apart. The first rock avalanche included grayer bedrock material seen around the margins of the lower half of the slide. The second rock avalanche is orange in color, both from bedrock and from waste rock from mining. The new study found the landslide triggered 16 small quakes. Such triggering has not been noted previously. The slide likely was the largest nonvolcanic landslide in North America’s modern history. Photo Credit: Kennecott Utah Copper (Click image to enlarge)

While earthquakes regularly trigger landslides, the gigantic landslide the night of April 10, 2013, is the first known to have triggered quakes. The slide occurred in the form of two huge rock avalanches at 9:30 p.m. and 11:05 p.m. MDT at Rio Tinto-Kennecott Utah Copper’s open-pit Bingham Canyon Mine, 20 miles southwest of downtown Salt Lake City. Each rock avalanche lasted about 90 seconds.

While the slides were not quakes, they were measured by seismic scales as having magnitudes up to 5.1 and 4.9, respectively. The subsequent real quakes were smaller.

Kennecott officials closely monitor movements in the 107-year-old mine – which produces 25 percent of the copper used in the United States – and they recognized signs of increasing instability in the months before the slide, closing and removing a visitor center on the south edge of the 2.8-mile-wide, 3,182-foot-deep open pit, which the company claims is the world’s largest manmade excavation.

Landslides – including those at open-pit mines but excluding quake-triggered slides – killed more than 32,000 people during 2004-2011, the researchers say. But no one was hurt or died in the Bingham Canyon slide. The slide damaged or destroyed 14 haul trucks and three shovels and closed the mine’s main access ramp until November.

“This is really a geotechnical monitoring success story,” says the new study’s first author, Kris Pankow, associate director of the University of Utah Seismograph Stations and a research associate professor of geology and geophysics. “No one was killed, and yet now we have this rich dataset to learn more about landslides.”

There have been much bigger human-caused landslides on other continents, and much bigger prehistoric slides in North America, including one about five times larger than Bingham Canyon some 8,000 years ago at the mouth of Utah’s Zion Canyon.

But the Bingham Canyon Mine slide “is probably the largest nonvolcanic landslide in modern North American history,” said study co-author Jeff Moore, an assistant professor of geology and geophysics at the University of Utah.

There have been numerous larger, mostly prehistoric slides – some hundreds of times larger. Even the landslide portion of the 1980 Mount St. Helens eruption was 57 times larger than the Bingham Canyon slide.

News reports initially put the landslide cost at close to $1 billion, but that may end up lower because Kennecott has gotten the mine back in operation faster than expected.

Until now, the most expensive U.S. landslide was the 1983 Thistle slide in Utah, which cost an estimated $460 million to $940 million because the town of Thistle was abandoned, train tracks and highways were relocated and a drainage tunnel built.

Pankow and Moore conducted the study with several colleagues from the university’s College of Mines and Earth Sciences: J. Mark Hale, an information specialist at the Seismograph Stations; Keith Koper, director of the Seismograph Stations; Tex Kubacki, a graduate student in mining engineering; Katherine Whidden, a research seismologist; and Michael K. McCarter, professor of mining engineering.

The study was funded by state of Utah support of the University of Utah Seismograph Stations and by the U.S. Geological Survey.

Rockslides Measured up to 5.1 and 4.9 in Magnitude, but Felt Smaller

The University of Utah researchers say the Bingham Canyon slide was among the best-recorded in history, making it a treasure trove of data for studying slides. 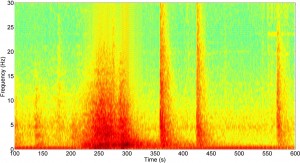 This spectrogram of a seismic recording shows four peaks in red and orange. The first, wider peak represents the low rumbling of the second rock avalanche in the massive Bingham Canyon Mine landslide in Utah on April 10, 2013. The three sharper peaks are from three of the small earthquakes that were triggered by the slide, which likely was the largest nonvolcanic landslide in modern North American history. Photo Credit: University of Utah Seismograph Stations (Click image to enlarge)

Moore calculated that not only would bury Central Park 66 feet deep, but also is equivalent to the amount of material in 21 of Egypt’s great pyramids of Giza.

The landslide’s two rock avalanches were not earthquakes but, like mine collapses and nuclear explosions, they were recorded on seismographs and had magnitudes that were calculated on three different scales:

Pankow says the larger magnitudes more accurately reflect the energy released by the rock avalanches, but the smaller Richter magnitudes better reflect what people felt – or didn’t feel, since the Seismograph Stations didn’t receive any such reports. That’s because the larger surface-wave magnitudes record low-frequency energy, while Richter and coda magnitudes are based on high-frequency seismic waves that people usually feel during real quakes.

So in terms of ground movements people might feel, the rock avalanches “felt like 2.5,” Pankow says. “If this was a normal tectonic earthquake of magnitude 5, all three magnitude scales would give us similar answers.”

The slides were detected throughout the Utah seismic network, including its most distant station some 250 miles south on the Utah-Arizona border, Pankow says. 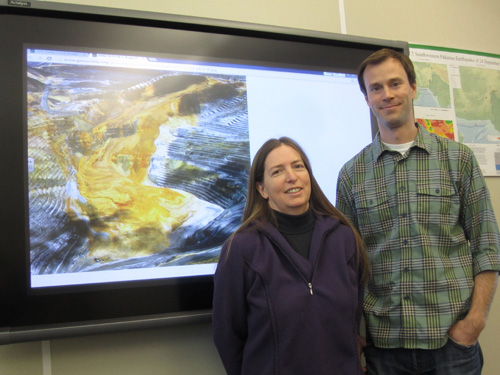 The second rock avalanche was followed immediately by a real earthquake measuring 2.5 in Richter magnitude and 3.0 in coda magnitude, then three smaller quakes – all less than one-half mile below the bottom of the mine pit.

The Utah researchers sped up recorded seismic data by 30 times to create an audio file in which the second part of the slide is heard as a deep rumbling, followed by sharp gunshot-like bangs from three of the subsequent quakes.

Later analysis revealed another 12 tiny quakes – measuring from 0.5 to minus 0.8 Richter magnitude. (A minus 1 magnitude has one-tenth the power of a hand grenade.) Six of these tiny tremors occurred between the two parts of the landslide, five happened during the two days after the slide, and one was detected 10 days later, on April 20. No quakes were detected during the 10 days before the double landslide.

“We don’t know of any case until now where landslides have been shown to trigger earthquakes,” Moore says. “It’s quite commonly the reverse.”

The landslide, from top to bottom, fell 2,790 vertical feet, but its runout – the distance the slide traveled – was almost 10,072 feet, or just less than two miles.

“It was a bedrock landslide that had a characteristically fast and long runout – much longer than we would see for smaller rockfalls and rockslides,” Moore says.

While no one was present to measure the speed, rock avalanches typically move about 70 mph to 110 mph, while the fastest moved a quickly as 220 mph.

So at Bingham Canyon, “we can safely say the material was probably traveling at least 100 mph as it fell down the steepest part of the slope,” Moore says.

The researchers don’t know why the slide happened as two rock avalanches instead of one, but Moore says, “A huge volume like this can fail in one episode or in 10 episodes over hours.”

The Seismograph Stations also recorded infrasound waves from the landslide, which Pankow says are “sound waves traveling through the atmosphere that we don’t hear” because their frequencies are so low.

Both seismic and infrasound recordings detected differences between the landslide’s two rock avalanches. For example, the first avalanche had stronger peak energy at the end that was lacking in the second slide, Pankow says.

“We’d like to be able to use data like this to understand the physics of these large landslides,” Moore says.