Some of the most valuable “real estate” for humans isn’t on Earth at all but rather above the planet’s atmosphere, where all manner of human-made objects orbit. The problem is that those orbits are too crowded with dead satellites and debris, making new launches riskier.

Robert Winglee has spent years developing a magnetized ion plasma system to propel a spacecraft at ultra-high speeds, making it possible to travel to Mars and return to Earth in as little time as 90 days. The problem is that cost and other issues have dampened the desire to send astronauts to Mars or any other planet.

But Winglee, who heads the University of Washington’s Earth and Space Sciences Department, believes his problem might actually be a solution to the problem of space junk crowding the orbital paths around Earth.

A magnetized-beam plasma propulsion device (mag-beam for short) in Earth orbit would be able to use a focused ion stream to push dead satellites and other debris toward Earth’s atmosphere, where they would mostly burn up on re-entry. The idea has drawn interest, and some funding, from the U.S. Defense Department. 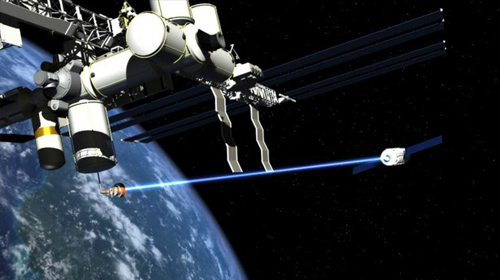 In this artist’s conception, a magnetized beam of ionized plasma is applied to a spacecraft headed on an interplanetary journey. The same technology could be used to remove dead satellites and other debris from Earth orbit. Image credit: University of Washington

“Our proposal was that we could mitigate a whole region of space rather than work with individual pieces one at a time,” Winglee said.

As a propulsion method, mag-beam would interact with a specialized receptor on a spacecraft, pushing it to speeds perhaps greater than 18,000 miles per hour. Satellites orbiting Earth don’t have those specialized receptors, but Winglee said applying the beam directly to the satellite would still provide enough momentum to move a satellite toward the atmosphere.

A geosynchronous orbit, one in which a satellite returns to the same position above the Earth each day, “is very valuable space, but it’s full of dead satellites,” he said. For decades, communications satellites have been placed in orbits from hundreds of miles to several thousand miles above sea level to create a fixed point in the sky for ground installations to communicate with satellites. Many of those satellites have ceased to function, though they continue in their orbits.

That might not sound like such a big problem, but as space gets more crowded with gadgets, the chance of a collision between two satellites becomes even greater. Then, instead of two larger objects to worry about, satellites worth vast sums of money – and perhaps even space vehicles such as the International Space Station – would have to navigate through a cloud of debris. Even a tiny washer or screw traveling at 6,700 miles per hour in Earth orbit could cause serious damage to another object.

Using a mag-beam to clean up the debris is feasible now, Winglee said, and could be accomplished through a standard satellite mission costing perhaps $300 million.

The technology would not be useful for pushing near-Earth asteroids or comets away from the planet, he said, because they have too much mass for the mag-beam to be effective.

Meanwhile, Winglee and his students continue research in his Johnson Hall laboratory on the possibility of placing mag-beam units in orbit around Earth and around a planet such as Mars that humans might want to explore. With a unit on each end – one to give a spacecraft a high-velocity push on its journey and the other to slow it at its destination – a mission to Mars could be accomplished in as little as 90 days, rather than the 2.5 years it would take with conventional means.

“We’re continuing on a shoestring budget, and we’re modeling what the system can do over longer distances,” Winglee said.