Do I Look Bigger With My Finger on a Trigger? Yes, Says UCLA Study

UCLA anthropologists asked hundreds of Americans to guess the size and muscularity of four men based solely on photographs of their hands holding a range of easily recognizable objects, including handguns.

The research, which publishes today in the scholarly journal PLoS ONE, confirms what scrawny thugs have long known: Brandishing a weapon makes a man appear bigger and stronger than he would otherwise.

“There’s nothing about the knowledge that gun powder makes lead bullets fly through the air at damage-causing speeds that should make you think that a gun-bearer is bigger or stronger, yet you do,” said Daniel Fessler, the lead author of the study and an associate professor of anthropology at UCLA. “Danger really does loom large — in our minds.”

Researchers say the findings suggest an unconscious mental mechanism that gauges a potential adversary and then translates the magnitude of that threat into the same dimensions used by animals to size up their adversaries: size and strength.

“We’ve isolated a capacity to assess threats in a simple way,” said Colin Holbrook, a UCLA postdoctoral scholar in anthropology and co-author of the study. “Though this capacity is very efficient, it can misguide us.” 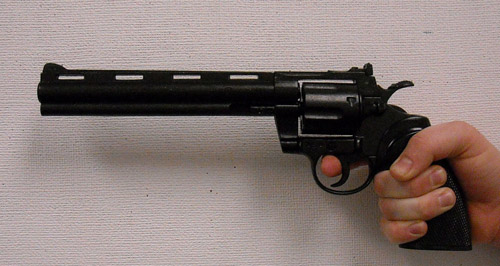 Gun Photo. Photo from study. Holding a gun like this makes a man appear taller and stronger than he would otherwise, UCLA anthropologists have found. (Image credit: Daniel Fessler/UCLA)

The study is part of larger project funded by the U.S. Air Force Office of Scientific Research to understand how people make decisions in situations where violent conflict is a possibility. The findings are expected to have ramifications for law enforcement, prison guards and the military.

“We’re exploring how people think about the relative likelihood that they will win a conflict, and then how those thoughts affect their decisions about whether to enter into conflict,” said Fessler, whose research focuses on the biological and cultural bases of human behavior. He is the director of UCLA’s Center for Behavior, Evolution and Culture, an interdisciplinary group of researchers who explore how various forms of evolution shape behavior.

For the study, the UCLA researchers recruited participants in multiple rounds using classified advertisements on the websites Craigslist and MechanicalTurk. In one round, 628 individuals were asked to look at four pictures of different hands, each holding a single object: a caulking gun, electric drill, large saw or handgun.

“Tools were used as control objects to rule out the possibility that a simple link with traditionally masculine objects would explain intuitions that the weapon-holders were larger and stronger,” Fessler explained.

The individuals were then asked to estimate the height of each hand model in feet and inches based solely on the photographs of their hands. Participants also were shown six images of progressively taller men and six images of progressively more muscular men and asked to estimate which image came closest to the probable size and strength of the hand model.

Study participants consistently judged pistol-packers to be taller and stronger than the men holding the other objects, even though the experiment’s four hand models were recruited on the basis of their equivalent hand size and similar hand appearance (white and without identifying marks such as tattoos or scars).

To rule out the possibility that a feature of any one hand might influence the estimates, researchers had taken separate pictures of each hand holding each object — some participants saw the gun held by one hand model, others saw the same gun held by another model, and so on; they did the same thing for each of the objects. The researchers also shuffled the order in which the photos were presented.

On average, participants judged pistol packers to be 17 percent taller and stronger than those judged to be the smallest and weakest men — the ones holding caulking guns. Hand models holding the saw and drill followed gun-wielders in size and strength.

“The function of the system is to provide an easy way for people to assess the likelihood that they would win or lose in a conflict,” said Jeffrey K. Snyder, a UCLA graduate student in anthropology and a study co-author.

Concerned that their findings might be influenced by popular culture, which often depicts gun-slingers as big and strong men, the team conducted two more studies using objects that did not seem to have a macho image: a kitchen knife, a paint brush and a large, brightly colored toy squirt gun. In the initial round, a new group of 100 subjects was asked to evaluate the danger posed by each of the objects (which were presented alone, without hands holding them). They then were asked to pick the type of person most associated with the object: a child, a woman or a man.

In the final round of tests, a new group of 541 individuals was shown male hands holding the knife, paint brush and squirt gun and was then asked to estimate the height and muscularity of the hand models. Once again, men holding the most lethal object — in this case, the kitchen knife — were judged to be the biggest and strongest, followed by those holding the paint brush and the squirt gun.

“It’s not Dirty Harry’s or Rambo’s handgun — it’s just a kitchen knife, but it’s still deadly,” Holbrook said. “And our study subjects responded accordingly, estimating its holder to be bigger and stronger than the rest.”

PLoS ONE is an international, peer-reviewed, open-access, online journal published by the Public Library of Science (PLoS), a nonprofit organization.