Talk with material scientist Edith Bourret-Courchesne about what it takes to grow and develop useful crystals and a word you will hear repeated often is “patience.” As the leader of a unique crystal growth facility at Lawrence Berkeley National Laboratory (Berkeley Lab) dedicated to the synthesis of crystals and new materials, patience is more than a virtue, it’s a necessity.

“The growth of every crystal is unique, like the formation of a snowflake, and since we work with compounds that have never before been crystallized the processes by which we grow our crystals are also unique,” she says. “As a result, a lot of our research is aimed at understanding why something didn’t work.”

Bourret-Courchesne is a senior scientist with Berkeley Lab’s Materials Sciences Division where she has been studying the synthesis of new crystals and materials since 1984. In her research career she has seen and done it all – large single crystals, nanocrystals and fibers, thin epitaxial films, etc. Today, in collaboration with the Radiotracer Development and Medical Imaging Department, she presides over a wide range of crystal purification, growth and characterization research, an effort that is increasingly becoming as rare as the crystals she grows.

“Most of the crystal-growing facilities in the United States have been closed,” Bourret-Courchesne says. “Growing and developing crystals is a very expensive, time-consuming, trial-and-error proposition, and the commercial market for new materials is relatively small.” 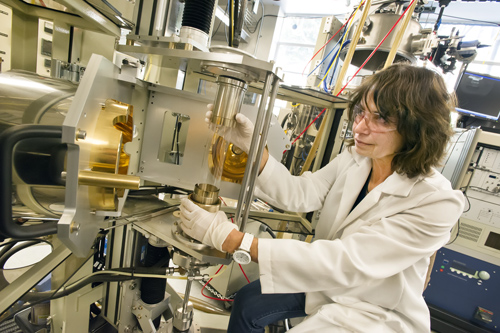 In 2008, Bourret-Courchesne’s crystal growth research effort received a much welcomed boost in the form of a grant from the U.S. Department of Energy (DOE) through the National Nuclear Security Agency (NNSA). This NNSA grant enabled Berkeley Lab  to acquire the capabilities needed to grow and develop new single crystals as high-performance scintillators that can be used for the detection of nuclear materials. Plutonium and enriched uranium emit gamma rays that interact with a scintillator to produce measurable flashes of light, even if the source of the radiation has been shielded by concrete, dirt, or a thin layer of lead.

For years, the reigning material for detecting gamma rays has been high-purity crystals of the semiconductor germanium. However, germanium crystals must be chilled to liquid nitrogen temperatures for optimal performance. While this is not much of a problem for scientific and medical purposes, it is highly impractical for homeland security applications.

“The challenge for us is to find new scintillators that provide  good energy resolution, stopping power and light output, are sufficiently fast, can be produced at low cost for large scale deployment, and operate at room temperature,” Bourret-Courchesne says. “Given that there are more than 450,000 known but unexplored crystal forms as candidates, we should be able to find and develop scintillators that can meet these requirements.” 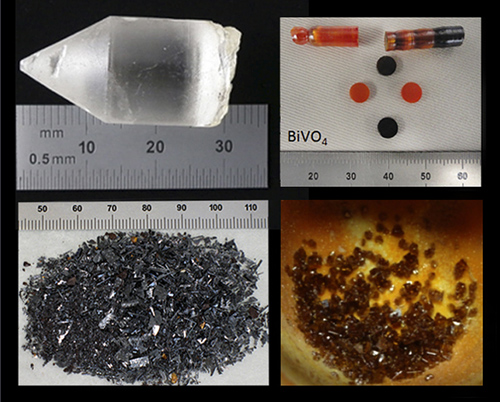 With the NNSA grant, Bourret-Courchesne and her colleagues greatly improved the versatility of their crystal growth facility. Their goals included reducing the time required to develop crystal growth protocols and increasing the speed with which they could respond to radiation detector needs. They also wanted to reduce the trial-and-error aspects of crystal growth and development.

“We wanted to make crystal growth more exact with reproducible processes, like other scientific disciplines,” she says.

The upgraded crystal growth facility now houses an array of furnaces and ovens that can grow crystals over a range of temperatures, from ambient to 2,500 degrees Celsius, and pressures up to 20 atmospheres. Their high-throughput synthesis and characterization capabilities, which are funded by the U.S. Department of Homeland Security, enable them on a yearly basis to screen about 1,000 candidate compounds and perform crystal growth and characterizations for about 100 of those candidates. Already, they’ve identified alkali-earth halide compounds, especially mixtures of barium and cesium, as a highly promising and potentiallycost-efficient next generation of scintillators.

“While most scintillators are identified in polycrystalline form, some scintillation properties such as luminosity and energy resolution can only be measured on single crystals,” Bourret-Courchesne says. “Initially we grow small crystals. If the small crystals have good properties we can chose to develop the growth process further, or we can grow crystals for other colleagues to further study their properties. Eventually we will need to grow large crystals for test devices, but we’re not at that stage yet.”

Although there is added emphasis now on scintillators for radiation detectors, Bourret-Courchesne and her group also carry out a broader effort in the synthesis not only of crystals but new materials as well. Within the Materials Sciences Division, they are contributors to the Quantum Materials program, in which researchers look at materials, such as superconductors, whose macroscopic properties largely stem from correlated electron systems and other quantum mechanical effects. They are also growing exotic crystals for use in thermoelectrics and topological insulators. In addition, they are working with researchers in Berkeley Lab’s Life Sciences Division to develop semiconductor scintillator crystals that would benefit medical diagnostics systems and other non-destructive imaging technologies.

“Our crystal growth facility is starting to become known outside of Berkeley Lab and we’re beginning to receive requests for collaborations with researchers from other national laboratories and from private industry,” Bourret-Courchesne says. “There’s a wide variety of research that can benefit from our capabilities with regards to synthesizing new crystals and materials from compounds, and we’re open to funded collaborations.” 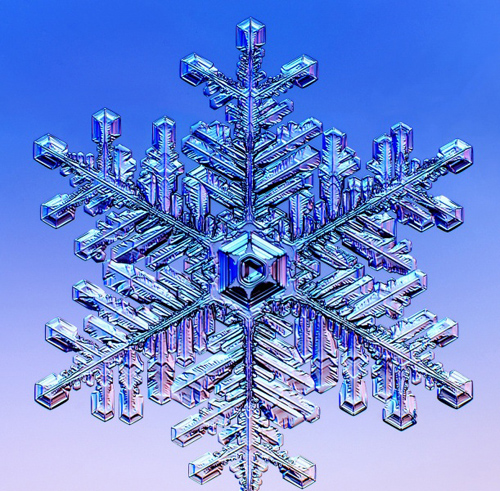 Like the formation of a snowflake, the growth of every crystal is unique, but researchers at Berkeley Lab’s crystal growth facility seek to make crystal growth more exact. (Image from Caltech)