Earthquake shaking in the eastern United States can travel much farther and cause damage over larger areas than previously thought.

“We used landslides as an example and direct physical evidence to see how far-reaching shaking from east coast earthquakes could be,” said Randall Jibson, USGS scientist and lead author of this study. “Not every earthquake will trigger landslides, but we can use landslide distributions to estimate characteristics of earthquake energy and how far regional ground shaking could occur.”

“Scientists are confirming with empirical data what more than 50 million people in the eastern U.S. experienced firsthand: this was one powerful earthquake,” said USGS Director Marcia McNutt. “Calibrating the distance over which landslides occur may also help us reach back into the geologic record to look for evidence of past history of major earthquakes from the Virginia seismic zone.” 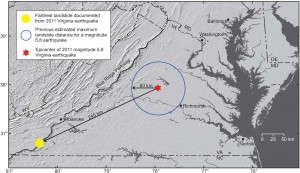 Landslides triggered from the 2011 magnitude 5.8 earthquake in Virginia occurred at far greater distances than expected. The farthest landslide was 245 km from the epicenter; based on previous studies of worldwide earthquakes, landsliding would have been expected to occur no farther than 60 km from the epicenter. Image credit: U.S. Geological Survey

This study will help inform earthquake hazard and risk assessments as well as emergency preparedness, whether for landslides or other earthquake effects.

This study also supports existing research showing that although earthquakes are less frequent in the East, their damaging effects can extend over a much larger area as compared to the western United States. 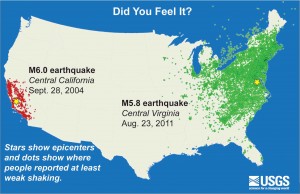 Did You Feel It? East vs West: This image illustrates how earthquakes are felt over much larger areas in the eastern U.S. than those west of the Rocky Mountains. The map compares USGS "Did You Feel It?" data from the magnitude 5.8 earthquake on August 23, 2011 in central Virginia (green) to data from an earthquake of similar magnitude and depth in California (red). Image credit: U.S. Geological Survey

“What makes this new study so unique is that it provides direct observational evidence from the largest earthquake to occur in more than 100 years in the eastern U.S,” said Jibson. “Now that we know more about the power of East Coast earthquakes, equations that predict ground shaking might need to be revised.”

It is estimated that approximately one-third of the U.S. population could have felt last year’s earthquake in Virginia, more than any earthquake in U.S. history. About 148,000 people reported their ground-shaking experiences caused by the earthquake on the USGS “Did You Feel It?” website. Shaking reports came from southeastern Canada to Florida and as far west as Texas. 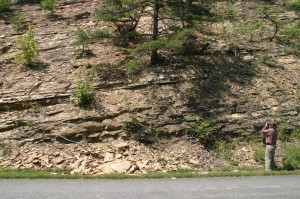 Photographing Rock Fall Triggered by 2011 Virginia Earthquake. USGS geologist Ed Harp photographing a small rock fall from a road cut along the Blue Ridge Parkway north of Roanoke, Virginia. This is part of a study documenting landslides triggered from the 2011 magnitude 5.8 earthquake in Virginia. Green grass beneath the rock fragments indicates that the rock fall is fresh and probably was triggered by the earthquake. Image credit: Randall Jibson, USGS

“The landslide distances from last year’s Virginia earthquake are remarkable compared to historical landslides across the world and represent the largest distance limit ever recorded,” said Edwin Harp, USGS scientist and co-author of this study. “There are limitations to our research, but the bottom line is that we now have a better understanding of the power of East Coast earthquakes and potential damage scenarios.”

The difference between seismic shaking in the East versus the West is due in part to the geologic structure and rock properties that allow seismic waves to travel farther without weakening.