The SOLITAIRE Flow Restoration Device is among an entirely new generation of devices designed to remove blood clots from blocked brain arteries in patients experiencing stroke. It has a self-expanding, stent-like design and, once inserted into a clot using a thin catheter tube, it compresses and traps the clot. The clot is then removed by withdrawing the device, thus reopening the blocked blood vessel. 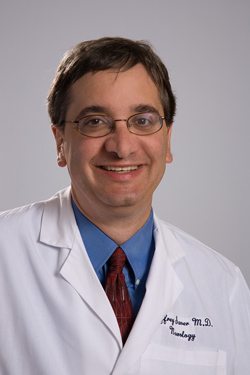 In the first U.S. clinical trial of SOLITAIRE, the device opened blocked vessels without causing symptomatic bleeding in or around the brain in 61 percent of patients. The standard Food and Drug Administration–approved mechanical device — a corkscrew-type clot remover called the MERCI Retriever — was effective in 24 percent of cases.

“This new device heralds a new era in acute stroke care,” said Saver, the study’s lead author and a professor of neurology at the David Geffen School of Medicine at UCLA. “We are going from our first generation of clot-removing procedures, which were only moderately good in reopening target arteries, to now having a highly effective tool. This really is a game-changing result.”

About 87 percent of all strokes are caused by blood clots blocking a blood vessel supplying the brain. The stroke treatment that has received the most study is the FDA–approved clot-busting drug known as tissue plasminogen activator, but this drug must be given within four-and-a-half hours after the onset of stroke symptoms, and even more quickly in older patients.

When clot-busting drugs cannot be used or are ineffective, the clot can sometimes be mechanically removed during, or beyond, the four-and-a-half–hour window. The current study, however, did not compare mechanical clot removal to drug treatment.

For the trial, called SOLITAIRE With the Intention for Thrombectomy (SWIFT), researchers randomly assigned 113 stroke patients at 18 hospitals to receive either SOLITAIRE or MERCI therapy within eight hours of stroke onset, between January 2010 and February 2011. The patients’ average age was 67, and 68 percent were male. The time from the beginning of stroke symptoms to the start of the clot-retriever treatment averaged 5.1 hours. Forty percent of the patients had not improved with standard clot-busting medication prior to the study, while the remainder had not received it.

At the suggestion of a safety monitoring committee, the trial was ended nearly a year earlier than planned due to significantly better outcomes with the experimental device.

“Nearly a decade ago, our UCLA Stroke Center team invented the first stroke retrieval device — the MERCI Retriever — and now we are pleased to have helped develop and successfully test a superior, next-generation clot removing device,” said Dr. Reza Jahan, associate professor of radiology at UCLA and the study’s principal neurointerventional investigator, who also led the pre-clinical studies. “It is exciting to have a highly effective new tool that can improve the outcomes for more stroke patients.”

Saver and Jahan received compensation from Covidien as scientific consultants for the design and conduct of the trial.

Covidien, the device manufacturer, funded the study. Although not yet approved in the United States, SOLITAIRE is used in Europe.