Searching for Planets in Clouds of Dust

*A UA astronomy research team was awarded a $600,000 grant for technology development under NASA’s Explorer mission program. The mission would send a space telescope high above Earth’s surface to watch how planets around other stars form and evolve.*

At the University of Arizona’s Steward Observatory, an astronomy research team is asking questions such as, “How do planets like those found by Kepler arise? What materials are present during their initial formation? How do they evolve?” 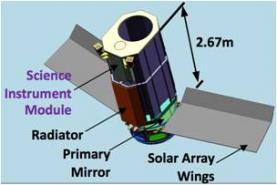 If selected for flight, EXCEDE will use a 2.3 foot (.7 meter) primary mirror and a sophisticated starlight suppression system that will enable astronomers to observe the regions around stars otherwise hidden by starlight. (Photo credit: Glenn Schneider/Steward Observatory)

Glenn Schneider and his team hope to answer these questions with their mission proposal, EXCEDE, short for Exoplanetary Circumstellar Environments and Disk Explorer.

If selected for flight, EXCEDE would orbit 2,000 kilometers above the Earth’s surface. It would use a primary mirror 2.3 feet (.7 meter) wide and a highly efficient starlight suppression system that would allow astronomers to see past a star’s glare to observe the surrounding regions where possible planets may abide.

“We want to understand how those exoplanetary systems come into being,” said Schneider, “how unique or commonplace they are compared to our solar system and what makes other solar systems similar or different from our own.” 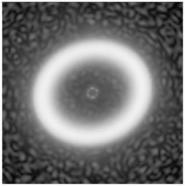 The dust disks around stars provide clues as to what types of materials help form planets and how they evolve. (Photo credit: G. Bryden)

To learn about the evolutionary processes of planetary systems, the EXCEDE mission team proposes to study a range of 350 star systems. The primary focus is centered on regions surrounding the stars, called circumstellar environments that contain dust disks.

Unlike common household dust, circumstellar dust consists of leftover debris from star formation that offers clues to what ingredients go into forming planets.

“Measuring circumstellar dust by imaging it directly maps out the area around stars,” explained Schneider. “It would tell us what types of material help form planets – whether the materials are small particles or big particles, a collection of different materials, or whether they are porous or non-porous.”

“With their gravity, those planets shape the dust around stars, leaving dust structures for us to see and deduce the planet orbits,” said Schneider. “We’re interested in the entire circumstellar regions where planets might exist, but the uniqueness space is the region we call the habitable zone – where, in principle, water-based life could exist.”

“It’s is a fancy name for the way we control light,” explained Schneider. “If you look at a star through a telescope, the light from the star itself is distributed over a big part of the image, and it makes it hard to see really faint things like dust or planets around stars.”

“The PIAA coronagraph will suppress that starlight and push that light back into the center where the star is, to keep the surrounded area dark. We need a dark background, not one polluted with starlight to see faint dust around stars.”

Other types of coronagraphs reject and block out some of the light that comes from stars, and as a result this causes light to diffract over a big part of the image.

While other types of coronagraphs (left), block out only some of a star's glare, the PIAA coronagraph (right) will suppress all of the light from a star, rendering the surrounding dust disks more visible. (Photo credit: Glenn Schneider/Steward Observatory)

“The PIAA coronagraph instead consists of highly curved mirrors to remap all of the light so there is no loss of light,” explained Schneider. “It puts the light where it’s supposed to be, if nature didn’t diffract it in the first place. We need something new, and that’s what EXCEDE is designed to do.”

If selected for flight, EXCEDE could launch as early as 2019.

“Beyond EXCEDE, the big push is to find out how common  Earth-like planets are and how unique or non-unique is the Earth itself,” Schneider added. “In the long-range look of things, we want to find Earth-like planets around stars and characterize them. A part of this is the search for life outside of our solar system.”