Scientists heard their first pops last week in an experiment that searches for signs of dark matter in the form of tiny bubbles.

They will need to analyze them further in order to discern whether dark matter caused any of the COUPP-60 experiment’s first bubbles at the SNOLAB underground science laboratory in Ontario, Canada. Dark matter accounts for nearly 90 percent of all matter in the universe, yet it is invisible to telescopes.

“Our goal is to make the most sensitive detector to see signals of particles that we don’t understand,” said Hugh Lippincott, a postdoctoral scientist with Fermi National Accelerator Laboratory. Lippincott has spent much of the past several months leading the installation of the one-of-a-kind detector at SNOLAB, 1.5 miles underground. 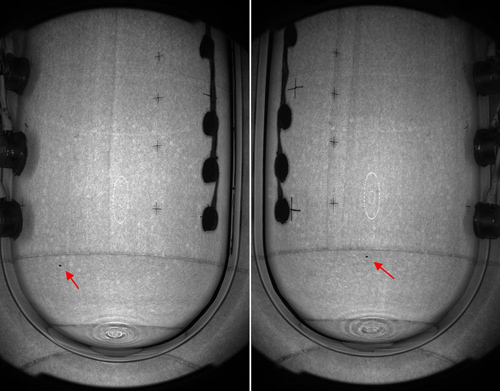 This stereoscopic view shows the first COUPP-60 bubble at SNOLAB. Visible on the sides are the strings of piezoelectric sensors used to discriminate between alpha radioactivity and nuclear recoils like those expected from dark matter interactions. Image courtesy of SNOLAB

COUPP, or the Chicagoland Observatory for Underground Particle Physics, is a dark-matter experiment funded by the Department of Energy’s Office of Science. Fermilab managed the assembly and installation of the experiment’s detector. Leading the experiment is Juan Collar of the Kavli Institute for Cosmological Physics at the University of Chicago.

“Operation of COUPP-60 at SNOLAB is the culmination of a decade of work at the University of Chicago and Fermilab,” said Collar, an associate professor in physics. “This device has the potential to become the most sensitive dark matter detector in the world, for both modes of interaction expected from Weakly Interacting Massive Particles.” 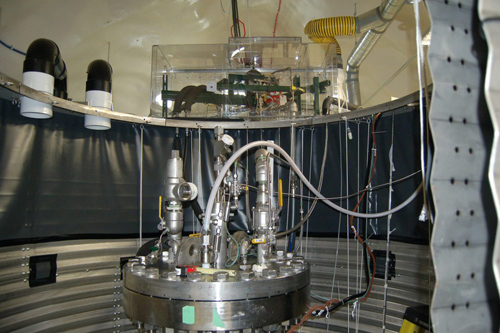 The COUPP-60 detector installed at the SNOLAB underground laboratory in Ontario, Canada. Image courtesy of SNOLAB

The COUPP-60 detector is a jar filled with 60 kilograms of purified water and CF3I—an ingredient found in fire extinguishers. The liquid in the detector is kept at a temperature and pressure slightly above the boiling point, but it requires an extra bit of energy to actually form a bubble. When a passing particle enters the detector and disturbs an atom in the clear liquid, it provides that energy.

Dark matter particles, which scientists think rarely interact with other matter, should form individual bubbles in the COUPP-60 tank.

“The events are so rare, we’re looking for a couple of events per year,” Lippincott said.

Other, more common and interactive particles such as neutrons are more likely to leave a trail of multiple bubbles as they pass through.

Over the next few months, scientists will analyze the bubbles that form in their detector to test how well COUPP-60 is working and to determine whether they see signs of dark matter. One of the advantages of the detector is that it can be filled with a different liquid, if scientists decide they would like to alter their techniques.

“We are already working on a 500-kilogram chamber, to be installed in the same site starting in 2015,” Collar said.

Scientists further shield the COUPP-60 detector from neutrons and other particles by submersing it in 7,000 gallons of water.

Scientists first proposed the existence of dark matter in the 1930s, when they discovered that visible matter could not account for the rotational velocities of galaxies. Other evidence, such as gravitational lensing that distorts the view of faraway stars and the inability to explain how other galaxies hold together if not for the mass of dark matter, have improved scientists’ case. Astrophysicists think dark matter accounts for about a quarter of the matter and energy in the universe. But no one has conclusively observed dark matter particles.

— This article was adapted from a Fermilab announcement:
https://www.fnal.gov/pub/presspass/press_releases/2013/Dark-Matter-Detector-2013.html