White policemen pulling a black man from a car and viciously beating him. Black male rioters erupting after the officers are acquitted of assault and excessive force charges. Black male rioters pulling a white man from his truck and viciously beating him. Men of color looting stores. Gun-toting male shopkeepers poised on rooftops to protect their businesses.

So many of the indelible images of the 1992 Los Angeles riots feature men, especially black and white men. But there was also a women’s story behind the so-called Rodney King riots, and it is considerably more important and ethnically nuanced than the one that lingers in the public imagination, a UCLA historian argues in a new book. 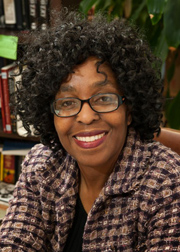 “Most people believe that the LAPD beating of Rodney King sparked the Los Angeles riots of 1992,” says Brenda Stevenson, author of “The Contested Murder of Latasha Harlins: Justice, Gender and the Origins of the LA Riots.” “But this riot was boiling forth from the moment Latasha Harlins was shot.”

The book, to be published July 23 by Oxford University Press, presents the definitive history of the Harlins case, which resulted in a felony manslaughter conviction but no jail time for the middle-aged female Korean shopkeeper who on March 16, 1991, shot the 15-year-old Harlins in the back of the head after a scuffle. Harlins died with $2 in her hand — the cost of the bottle of juice shopkeeper Soon Ja Du believed the teenager was trying to shoplift.

Following the April 29, 1992, acquittal of four police officers in the videotaped beating of King, the Los Angeles riots raged for several days and left 54 dead, 2,383 injured and a billion dollars in total property damage. It remains one of the deadliest and costliest riots in American history.

“For many who actively participated in the protest, looting and destruction, and for the thousands who stayed at home, but understood all too well why others had gone, Rodney King was not the symbol of injustice that was being protested; Latasha Harlins was,” writes Stevenson, a UCLA professor of history and African-American studies.

The historian substantiates her argument by tracing the black community’s responses to the Harlins case, and the sentencing of Du in late 1991, during the months prior to the riots and by linking the case to the root causes of 17 other U.S. race riots since 1917. She concludes that the relationship between the Harlins case and the 1992 conflagration fits a distinct pattern.

One of the most consistent contributing factors to black social unrest proves to be “brutal or unjust treatment of a vulnerable or innocent member of the community, particularly a young person or a female,” Stevenson writes. “Such events undermined community patriarchies, challenging the vitality and legitimacy of black manhood and the citizenship rights associated with that manhood. How, indeed, could men be men if they could not protect their women and youth?”

The UCLA historian, who moved to Los Angeles just three months before the Harlins shooting in South-Central, was drawn to the case by a haunting parallel. At the time shopkeeper Soon Ja Du killed Harlins, the Westchester High School freshman was being raised by her aunt and grandmother because her own mother had been murdered six years earlier. The sentence in that shooting was so light that her mother’s killer — a woman who was romantically involved with Latasha’s father — had already served her time by the time Latasha was killed.

Stevenson is the author, editor and co-editor of numerous scholarly books and articles on topics in African-American history and is a recognized authority on Southern history, slavery and women. Her award-winning 1997 book, “Life in Black and White: Family and Community in the Slave South,” has been lauded for its balanced perspectives on the lives of slaves, plantation owners and freed slaves. Stevenson also received acclaim for her role in editing the journals of Charlotte Forten Grimké, a 19th-century free black woman from Philadelphia, as well as her co-editorship and contributions to the three-volume encyclopedia “Black Women in America.”

“The Contested Murder of Latasha Harlins” does more than lay out the details of the case. It deeply explores the personal and group histories of three women whose class and racial/ ethnic status differed significantly but whose fates intertwined in the case — the African-American high school girl, the Korean-American shopkeeper and the Jewish-American judge, Joyce Karlin, who handed down the controversial sentence that would haunt her career and would help spark the Los Angeles riots.

Stevenson traces Harlins’ family back to slave times and also lays out the political and economic hardships in South Korea that motivated the Du family to immigrate to the United States. The author goes back three generations to the arrival of Karlin’s Jewish ancestors from Russia at a time of pogroms and legalized persecution of Jews. Poignantly, Stevenson shows how Harlins’ and Karlin’s ancestors and Asian immigrants like Du have faced many of the same race-related hardships in American society.

The author describes a “mini-war” that erupted between Korean-American owners of liquor and convenience stores in South-Central Los Angeles and their African-American clients in the wake of the Harlins shooting at the Du’s Empire Liquor Market. And she shows how the 1992 riots eventually moved from Korean-owned stores in South-Central to Los Angeles’ Koreatown neighborhood, which tends to be remembered as the site of Korean–black conflict.

In addition to teasing apart the case’s ethnic strands, Stevenson explores the role of gender. She shows how Karlin, as a newly appointed female judge, may have felt pressure to overreach her abilities by taking on the “hot potato” case that her senior colleagues deftly avoided.

Stevenson enumerates the strict gender roles in Korean culture that drove an ill-prepared Du to take over for her husband and son at their South-Central liquor store on the fateful morning of the shooting. She also details the social science behind race and victimhood, suggesting that even an armed Asian-American woman is likely to be perceived in American culture as more feminine, and therefore more vulnerable and deserving of compassion, than a poor,  motherless black child with no criminal record and an honor-roll background.

“Culturally, Latasha was brushed with the same paint as the gang-bangers who sometimes frequented the Empire Liquor Market,” Stevenson writes.

Stevenson looks at judicial history in the U.S. and argues that Karlin’s sentence was consistent with an established pattern of legal rulings by female judges, who tend to look more frequently at the community stature of women involved in conflict than at the severity of their crimes.

“Typically, they’ll look at the role that a woman has in her family and community and determine a sentence by comparing the aggressor’s stature to that of the other woman,” Stevenson says. “Karlin saw Du as being a model citizen and a mother who was taking care of her family by minding the store. She saw Harlins as just the opposite.”